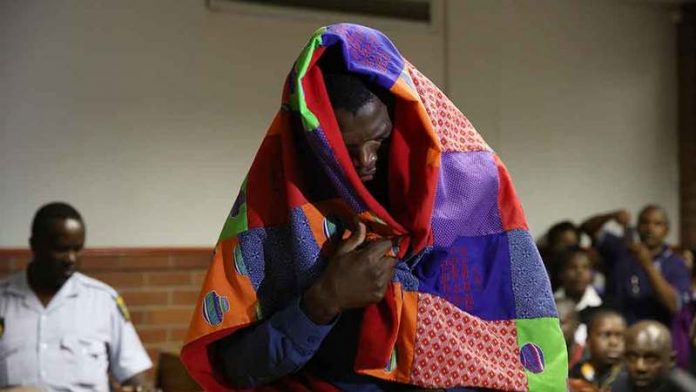 Swaziland national Sanele Goodness May, whose truck ploughed into six vehicles at a busy Durban intersection last year, killing 24 people, will spend the next eight years and 10 months in prison. This after he pleaded guilty to 31 charges at the high court in Durban on Friday.

However, with good behaviour, he could be released in six years.

The charges were read out to him in Zulu and through an interpreter he told Judge Kate Pillay: “I admit all the charges.”

On the evening of September 5 2013, in rush-hour traffic, May’s truck smashed into four minibus taxis and two cars at an intersection at the bottom of Fields Hill in Pinetown.

May has been in custody ever since. He was previously denied bail by the Pinetown Magistrate’s Court.

He was also sentenced to one year for violating the immigration laws, and four years for each of the traffic and licence violations.

All the sentences are to run concurrently, and the 14 months May has been in custody were taken into account.

“The effective sentence is one of eight years and 10 months. With good behaviour that could be reduced by a third or more,” said Pillay.

She said she believed May was remorseful and had “demonstrated contrition for his actions”.

May’s efforts to secure employment without a valid licence had “set a chain of events in motion that were tragic” despite his “noble intentions” to support his younger brother in Swaziland.

“The accused too did not emerge unscathed. He has had to sit in jail more than a year awaiting his fate.”

Truck owners
The accident highlighted the need for truck owners to verify the details and licences presented to them by prospective employees.

She urged traffic authorities to step up their policing on Fields Hill.

In his plea agreement, read into the record by his advocate Louis Barnard, May admitted he knew his driving permits were not legitimate and he had misrepresented to his employer Sagekal Logistics that they were valid.

It also emerged from the agreement that May had failed an initial driving test with the company two weeks prior to his employment on September 2 2013.

May kept his head down when press photographers tried to take pictures of him before he entered the dock.

On entering the dock a small group of supporters waved to him.

Sentence fair
As he left the dock after being sentenced a woman shouted from the public gallery: “We love you Sanele.”

Ntombi Duma, a teacher, who was in one of the taxis that May’s lorry ploughed into, said she believed the sentence was fair, but they wanted the owners of the vehicle to be held accountable for their role in the accident.

“We do believe that if the truck was fine, we wouldn’t have had such a big accident. Is he [the truck owner] a person who takes responsibility? Because if he does, he would have shown his responsibility by at least showing himself or sending a note to us [victims].

“There was nothing. It’s like whatever happened, it was Sanele’s truck and it was Sanele who did that,” she said.

She and only one other person in the taxi they were travelling in had survived the crash. “When I am looking at the video [of the crash] I don’t know how we survived.” She suffered spinal, neck and head injuries, and lost her hearing in one ear.

She could not recall anything of the accident and was discharged from hospital a month later. – Sapa