Racist or a biker who just likes using the K word? 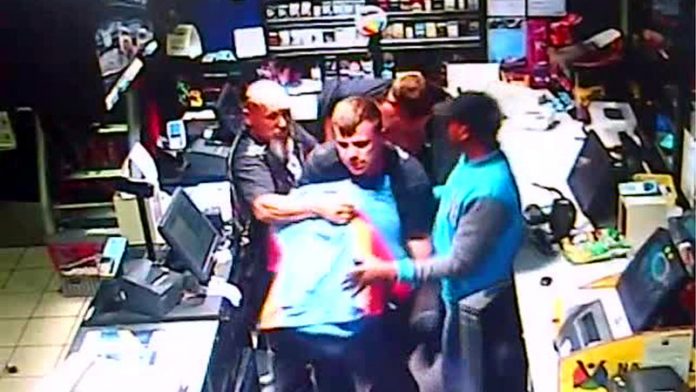 If you disturb the surface of the crispy rainbow nation exterior, you’re bound to find a lot of bedbugs in SA.

Yesterday CCTV footage from a petrol station in Witbank revealed a few bikers behind the counter of the store, beating up a petrol attendant. The attendant is black. The bikers, white.

But that’s not enough, is it? People have differences, beyond the colour of their skin. It’s too easy to say something manifests like this purely because two groups of people are different colours and so therefore it must be racism.

The store manager himself (Dries Marx) said that stuff like that doesn’t happen often, but it does sometimes happen. He went on to explain that he’s not sure whether it was racist, that maybe the bikers were just drunk and looking for trouble, and called the incident unfortunate.

Well, Dries, unfortunate, yes. Not racist? I’m not sure.

The bikers in the footage are seen to be wearing leather jackets with the Gypsy Jokers badge stitched on to their backs, a motorcycle club and crime syndicate originally formed in San Franciso in 1956. Wikipedia lists their key criminal activities as: armed robbery, arson, assault, counterfeiting, drug trafficking, fraud, gun trafficking, homicide, identity theft, motorcycle theft and prostitution.

“Gonzo” journalist Hunter S Thompson wrote about their notoriety for violence in his book Hell’s Angels: The strange and terrible saga of the outlaw motorcycle gangs. At the time, they were one of the most powerful gangs in the US. Then, they grew. They have 35 chapters worldwide – one of them in South Africa.

The description above sounds a bit hardcore. It sounds like the real deal. We’re talking about a biker group so serious, they don’t ride anything else. If they didn’t have a bike, they would just go out and steal one.

But that’s San Francisco and Germany, and Norway and Australia and wherever else. This is South Africa. Perhaps, they do just pull up in black Unos and blue Golfs each carrying four people to support their cronies (on motorcycles) in attacking petrol attendants.

A quick Google search led me to the motorcyclists.co.za website where the club is actually listed. There are no contact details. You have to be a club member to get those. I suspected that loading the page after the incident might prove to be a bit “difficult” or “not working anymore” so I screengrabbed it yesterday.

Their main locations in the country are listed as Benoni, Cape Town, Witbank, Vaal and the Free State. Not exactly locations screaming of racial integration. Still, not enough. I googled some more. Besides a few links leading to the group’s affiliation with white supremacy in the US, there was very little info on the South African arm of the club. Until a colleague sent me a  blog post – Gypsy Jokers Fun Day – A Pictorial Essay.

Besides the talk of “pretty young ladies” and “bar maids”, I also came across this picture:

Notice the man on the right. Now notice his t-shirt.

You can’t just go hang out with motorcycle clubs at a private shindig. Members are all aligned, strongly, to the same beliefs. You earn your badge. You don’t just wear a leather jacket with the insignia on it unless you practice firmly what the group stands for. It’s a community. A bond. And trespassers are often punished. What I’m saying is that the guy wearing the old South African flag – symbolic of its own belief system (I don’t really have to explain what that is in our country’s historical political climate, do I?) – probably did not just slip in for a stukkie wors with the Gypsy Jokers.

His associations with the group are probably a lot stronger than just being a hungry oke who pines for the old South Africa enough to stamp his body with it. He has support there. He is welcome there. And so are his beliefs.

Extended to the bikers in the footage then, was this attack an act of racism? Racism is not defined as one group of people being black and another being white. It encompasses prejudice and discrimination. It includes actions that inherently endorse the idea that one race is superior to another, thereby stipulating that inferior races must be grouped together and can be identified by the same descriptors, most of them degrading.

All of these ultimately support the ideology of the race that thinks it’s superior and builds on the degradation and inferiority of the opposing race. Opening it up to a host of actions, from hate crimes and social tarnishing to discrimination in the workplace. How is any of this done anymore in a 20-year-old democracy? How will we notice it? Mostly with the use of language. And that’s what sticks out in this specific incident.

In this specific incident, nothing sticks out more clearly than the use of language by these bikers. Mike Ntuli*, the attendant who was beaten by several bikers, and not just the one who took issue at the pump – was followed by the group into the store – where a colleague tried to protect him.

He said the original customer got angry at the pump after he asked them to move to another pump because the current one did not have the grade of petrol they needed.

“He called me a k***r and a monkey,” says Mike, and then made phone calls for support in the attack. When someone calls you a k***r and a monkey, would you feel like they’re a racist? After this offensive and degrading use of language, when this very person then proceeds to call a bunch of people in to beat you up, would you feel like it was a racist assault? If you asked Mike, he would probably answer yes to both of these.

Why are we still wondering then? Like any form of advertising, the rainbow nation brand is false, the happy glow of the branding is just selling you an idea. Little else. The product still contains a lot of the bad stuff. It isn’t clearly marked on the label. You don’t have to totally buy into the idea before you notice it. It’s like deciding not to share in the experience of a Coca-Cola because of all the sugar content, without having to lose teeth first.

It’s the same with South Africa’s false advertising and what lies beyond the rainbow nation tag line. We don’t all have to experience racism first hand or see it out in the open – apartheid style – to know that it really does exist, that it still is a massive issue.

We don’t have to stretch our eyes very far to notice that money (outside of the government’s excessive expenditure) has mostly stayed in the same hands. Stellenbosch, meet the people. The people, meet Stellenbosch. (Some of the richest men in the world dwell in that town alone. All white, all Afrikaans-speaking).

We don’t have to purse our lips and frown, head in hands, confused for days on end and wonder about organisations like Afriforum, and the University of Potchefstroom – and where all those funds go. And why transition and integration on some university campuses seems so much slower than others – almost intentionally so. Even 20 years later.

Racism in South Africa is a little bit bigger than Steve Hofmeyr and Dan Roodt. We can laugh, and point and mock their ignorance, but they are just poster boys of a much bigger problem. In many ways, they’re just small fish in a very big pond. A pond filled with hundreds and thousands of centuries-old, ingrained and inherent superiority complexes, privilege and acts of racism at the hands of white men.

A sense of entitlement, in these very men, so large and so vast and so delusional that it is the very thing that allows them, and people similar, to deny a black man’s experience of racism and the violence that ensues because of it. Even if he says it was one, in his own words.