Celebrating reconciliation in South Africa through the arts 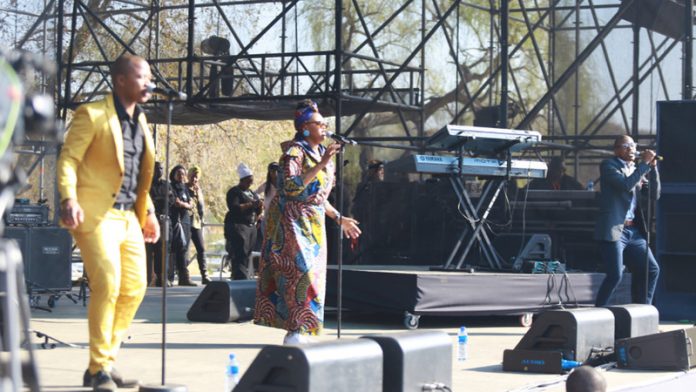 It’s been decades since blood flowed through the Ncome River. To be precise, 176 years have elapsed since the gore of an estimated 3 000 zulu warriors stained the river a crimson red, giving it its new name, Blood River.

This historic battle between the Voortrekkers and Zulu warriors, which resulted in the defeat of Zulu Kingdom ruler Dingane kaSenzangakhona’s men and his subsequent fleeing of Natal, has been commemorated and later made a public holiday.

From Dingane’s Day to the Day of the Vow, which is said to have marked the prayer the Voortrekkers took ahead of the battle, December 16 has over the years been known as many things.

The armed wing of the liberation party said this contentious date commemorated “the military victory of the Afrikaner Voortrekkers over the African warriors on the banks of the Ncome River (re-christened by the settlers Blood River) in Natal in 1838 and is thus symbolic for the ascendancy of white power over the Blacks”.

So years later, as the democratically-elected ANC party came into power in 1994, this day was renamed Day of Reconciliation and was marked as a day for national building and unity, unlike what its been known for: blood shed and violence.

To celebrate Reconciliation Day, the Mail & Guardian Friday looks at some events taking place in the Western and Eastern Cape, and Gauteng on the public holiday.

Western Cape
1. From art exhibitions to shows on ceramics and music during apartheid, Cape Town’s Iziko Museums of South Africa will be open on the public holiday and entrance is free. Find out what exhibitions are on.

2. The last day of Sonar, a two-day international music and new-media art festival, is taking place on this day. The 21st Sonar event has been held in Barcelona, Tokyo and Reykjavik, to name a few, and is now being held at the Good Hope Centre. Synth-pop band Pet Shop Boys headlined the event on Monday, but some of the Tuesday acts include Sibot and Toyato, Das Kapital and Fever Trails. Find the lineup here.

Gauteng
1. Monthly brunch and party, The WKND Social is taking place at Constitution Hill’s recently launched The Hill Café. Music and socialising usually characterises this event, and this time it will be hosted at a venue adjacent to the Constitutional Court and the Old Fort Prison Complex.

2. Soweto Art and Craft Fair will open its doors on the Day of Reconciliation. Usually open on the first Saturday of every month, the market is home to proudly Sowetan and South African arts and crafts, and takes place at the Soweto Theatre.

3. Husky-voiced singer and guitarist Oliver Mtukudzi will perform at Ekurhuleni Boksburg Hotel on the public holiday.

4. Once again, the All White Jazz Concert will move guest at Morula Casino. The annual benefit jazz show will feature South Arican acts The Soil, Zahara and Zonke as well as Selaelo Selota, to name a few.

Eastern Cape
The Mnquma Jazz Arts and Culture Festival will usher us into the festive season with a line-up that features local musicians, not just in jazz but in other genres as well. The line-up includes Simphiwe Dana, Zakes Bantwini, Tsepo Tshola, iFani, Berita and many more. – Staff reporter

Ramaphosa: South Africans must ‘capture the state and make sure it works’

The smart money is on festivals

Reconciliation — SA has a long way to go, says Zuma