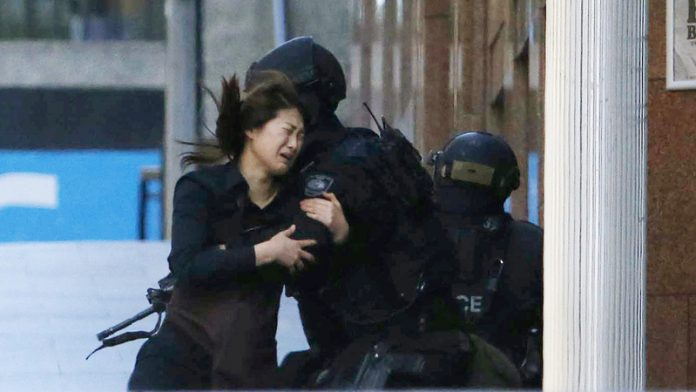 Emotions were raw as Australia struggled with the news that two hostages were killed when the day-long siege reached a climax in the early hours, as police commandos stormed the Lindt eatery in response to the Iranian-born gunman opening fire.

A giant sea of flowers were laid at a makeshift memorial near the scene in the heart of Sydney’s financial quarter, as Muslim community leaders joined their fellow citizens in mourning the victims, who were acclaimed as heroes.

“They were just going to work like everyone else, just going to get a cup of coffee. That could have been absolutely anyone,” one of those bearing flowers, Angelica Haifa, said.

Police in SWAT-style gear hurled percussion grenades and opened fire as they stormed the cafe just after 2am on Tuesday, following a standoff of more than 16 hours.

The 50-year-old lone gunman, widely named as Man Haron Monis, was shot and killed in the exchange that followed, officials said.

Six others were wounded, including three women with gunshot wounds, among them a 75-year-old. Two pregnant women were taken to hospital as a precaution.

“Reports have emerged this morning [Tuesday] of the heroism of the male victim of this siege,” Fisher said.

“Apparently seeing an opportunity Tori Johnson grabbed the gun, tragically it went off killing him. But it triggered the response of the police and eventual freedom for most of the hostages.

“Reports have also emerged that Katrina Dawson was shielding her pregnant friend from gunfire. These heroes were willing to lay down their lives so others might live.”

New South Wales Deputy Police Commissioner Catherine Burn did not confirm the chain of events, only that investigators were still working out what happened.

Abbott said the hostage-taker, who at one point unfurled an Islamic flag at the window of the cafe, “had a long history of violent crime, infatuation with extremism and mental instability”.

“As the siege unfolded … he sought to cloak his actions with the symbolism of the ISIL death cult,” he said, referring to the Islamic State group, while praising police for their response “to this brush with terrorism”.

Serious questions
The man was on bail for a series of violent offences, officials conceded.

New South Wales Attorney-General Brad Hazzard admitted there were serious questions over why he was free after being charged with being an accessory to his ex-wife’s murder and other offences.

“We are asking state agencies and federal agencies to look very closely at how this offender slipped through the cracks,” he told reporters, while state Premier Mike Baird added: “We are all outraged that this guy was on the street.”

The Muslim community, which condemned the hostage-taking and the use of the flag, won sympathy from ordinary Australians on its handling of the crisis.

Flags on all federal and New South Wales state buildings flew at half mast, while condolence books were opened.

The pre­-Christmas siege of the Lindt chocolate cafe began Monday morning and triggered a massive security lockdown in the bustling financial district as hundreds of police surrounded the site.

‘Lone wolf’
Reports said the gunman forced hostages to make videos with demands during the standoff, including that Abbott call him and that an Islamic State flag be delivered.

Monis’s former lawyer Manny Conditsis said the public could be assured it was not the work of an organised terrorist group.

“It’s not a concerted terrorism event or act. It’s a damaged­goods individual who’s done something outrageous,” he said of a man who arrived in Australia as a refugee in 1996.

Australia has been on high alert in recent months with the government raising concerns that citizens who have fought alongside Sunni jihadists in Iraq and Syria could return home radicalised and carry out “lone wolf” attacks.

The government in September raised its terror threat level and police conducted large­scale counter­terror raids across the country. Only two people were charged. – Sapa-AFP