Marikana and the brand journalist 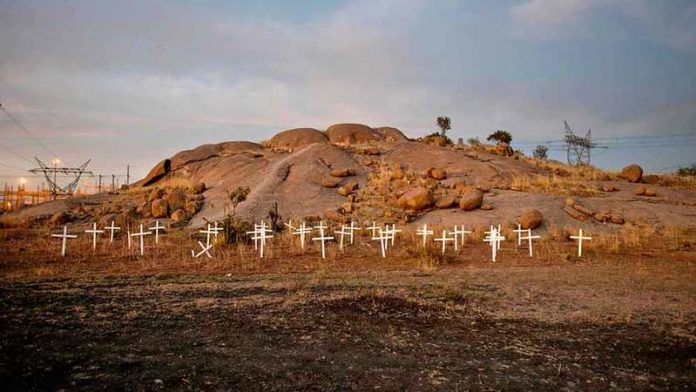 Gia Nicolaides’s Reporting from the Frontline: Untold Stories from Marikana is perhaps the single most disturbing book in the ever-growing canon that seeks to shed light on the lead-up and aftermath of the August 16 2012 massacre.

It joins another Jacana publication, View from the Mountain, by University of Johannesburg professor Peter Alexander and a collective of researchers, and We’re Going To Kill Each Other Today by Media24 journalists, along with Rehad Desai’s documentary Miners Shot Down.

But Nicolaides’s book, despite all the time she spent in the mining town, does not offer a nuanced view of the massacre or tensions between mineworkers and journalists. Instead, it leads us to ask uncomfortable but pertinent questions about the morphing relations between journalists and market forces.

This has led to the rise in journalists “brandifying themselves”, as Sunday Times books editor Ben Williams says. He is referring to journalists using their personalities to tell stories at the expense of those very stories they are trying to tell.

Nicolaides’s 220-page story starts in her suburban bedroom, somewhere in Alberton. Her recurring apocalyptic dream ends as she is about to drown in Hillbrow, her miniature dachshund Lola wagging excitedly at the edge of her bed.

That same week Nicolaides is assigned to Marikana, just a few days before the massacre. In her first few moments on the scene, she finds the miners difficult to approach; they are armed with “pangas, knives, sticks and knobkerries”.

A male colleague tells her that women are not allowed near the koppie as it will harm the effectiveness of the mineworkers’ muti.

Then, a threat of rape is issued to a female colleague by a group of mineworkers; as a black male colleague translates it, they promised “to rape her like a dog”.

The possibility of physical danger for female journalists in conflict situations is far more pronounced than it is for their male counterparts. But the problem is that Nicolaides bases her constant fear of approaching the workers on this one initial and indirect threat of rape.

Surely, Nicolaides’s fear – the rising death toll around Marikana notwithstanding – should have been tempered by at least an inkling that journalists were not mineworkers’ target. The Impala strike in Rustenburg several months before, where workers killed and injured strike breakers, should have helped to put things into perspective.

Almost from the start, Nicolaides starts to perceive her position behind the police line as “protection”. When pressed to urinate in Marikana, she gives it a miss because “I feared that pulling down one’s pants, even behind a bush, would be considered an invitation for these men”.

Female journalists interviewed by the Mail & Guardian shared difficulties around urinating but found it difficult to rationalise Nicolaides’s fear.

Athandiwe Saba of City Press said the only time she felt threatened was at Wonderkop stadium after the massacre, when the Association of Mineworkers and Construction Union president Joseph Mathunjwa told miners that some journalists were writing lies about him.

“You could feel the grumblings of the mineworkers,” says Saba. “But other than that, I went into Marikana, be it day or night, and spoke to the mineworkers.”

Madelene Cronjé, an M&G photographer, said when she was there she found that “mostly, people would point and look in your direction, or point and laugh. Once, somebody did make a throat-slitting gesture, but generally I didn’t feel more endangered than anywhere else.”

Nicolaides writes that the barrier between “me and the mineworkers was not only about language but also about my gender”. But it’s Nicolaides’s aversion to contextualising the violence that steers the book into the realm of racist stereotyping.

As one reads on and begins to know the reoccurring characters in the protagonist’s life – her dog, boyfriend Ant, editor Katy Katopodis – it becomes apparent that none of the mineworkers will be individualised and referred to by name. With the danger she ascribes to a specific group, we are forced to subscribe to a homogenous mass.

Since the reporting takes place “behind police protection” there is no surprise when she parrots the already discredited police version that the workers launched into a muti-crazed “suicidal charge” that resulted in their deaths. She does not balance this with subsequent footage shown repeatedly at the Marikana commission, which revealed that miners, corralled by barbed wire and police nyalas, were in a crouching position when they were ambushed.

Nicolaides’s publishers say they were going “the more commercial route” to allow Nicolaides to talk about her “lived experience” in that event. “We wanted to try something different because nonfiction titles in South Africa are dominated by academics,” says Jacana publicist Neilwe Mashigo. “We wanted to get a different view than having a researcher.”

Mashigo says the company had already put out View from the Mountain, a hastily assembled piece of advocacy helmed by academic Alexander.

As Gillian Schutte writes in her M&G critique of Desai’s Miners Shot Down, in which she accuses Desai of absolving white capitalist guilt by treating Deputy President Cyril Ramaphosa as the sole bogeyman: “The Marikana massacre is about real people with real families. It cannot be … sold as entertainment. It has to be handled as a textured and layered human rights issue first.”

By placing herself at the centre of the massacre and hyping her own sense of danger without interrogating it, Nicolaides seems to be pandering to a ready market that will swallow her stereotypes.

Sean Jacobs, a South African expatriate who is an assistant professor of international affairs at the New School for Public Engagement in New York and the editor of the blog Africa is a Country, says: “With the advent of social media, all publications demand that journalists brand themselves, regardless of how good the writing is. South Africa has a small market, but they’re bringing out books every week. More and more what we’re getting is not nuanced treatment of subjects, but Instabooks.”

In a recent M&G review of reporters Mandy Wiener and Barry Bateman’s book on the Oscar Pistorius murder trial, Behind the Door, Judge Dennis Davis argued that the book complicated what was a straightforward case; it was produced in “great haste” and caved into the pressures of a “prurient” market.

The book’s publisher, Terry Morris, the managing director at Pan Macmillan South Africa, says Behind the Door was meant for a “mass market” and in South Africa, publishers have to be risk averse. “We don’t have a big group of writers to draw from, so you have to go for someone well known, with a platform … I don’t necessarily see this as brand deve-lopment but about producing good books. If we had waited, would people have bought the Oscar book?”

Daily Maverick editor Branko Brkic says Poplak’s book worked because the writer was “talented and could provide a quick assessment of the moment … He would go to an event and, sometimes in two hours, sometimes in four or five, he would have put together a typical gem. The fact is that you can publish and market a book quickly but the writing still needs to be done.”

But Jacobs says it helps the Daily Maverick for Poplak to see himself as a Hunter S Thompson, “whether that is what Poplak aspires to be”.

Cultural critic and journalist Bongani Madondo, who often inserts himself as a protagonist in his stories, says the problem in Nicolaides’s book is not first-person narrative.

“That is a creative consideration any author and storyteller has to deal with. First person can either work wonders in the hands of a master, like Rian Malan, Touré at Rolling Stone or Gary Younge at the Guardian.

“Or it can just fall apart and splash an overeager amateur’s brains on the floor. The problem is this continued gazing at the other, often racial and class gazing, which most of us are guilty of.”