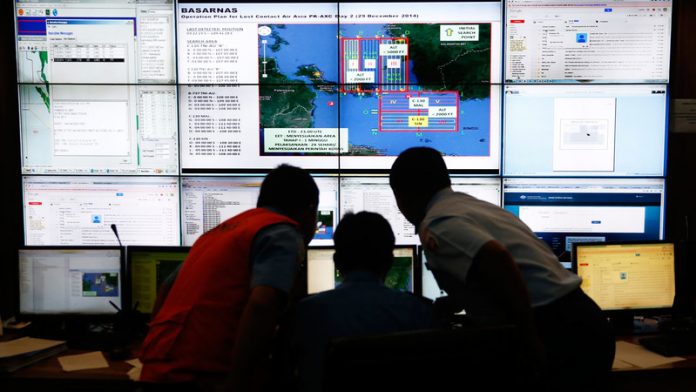 No debris from the Airbus A320-200 has so far been recovered, and Indonesia’s National Search and Rescue Agency chief Bambang Soelistyo said on Monday “the hypothesis is the plane is at the bottom of the sea”.

Following are some questions surrounding the disappearance and search, and answers by industry experts.

Q: What impact could bad weather have played on the plane’s fate?
Air traffic controllers lost contact with the twin-engine aircraft around an hour after it left Juanda International airport at Surabaya in East Java at 12.35am GMT on Sunday.

Shortly before disappearing, AirAsia said the plane had asked permission from Jakarta air traffic control to deviate from its flight plan and climb above bad weather in an area noted for severe thunderstorms.

Gerry Soejatman, a consultant with the Jakarta-based Whitesky Aviation chartered flight provider, said the verdict is still out on whether bad weather conditions was the “primary factor or just a contributory factor” for the disappearance.

“Based on the public information we have, the pilots turned to the left of its designated route, and also requested to climb to a higher altitude,” Soejatman told AFP.

“Approval was given for the left turn but there are indications the plane climbed without approval. If that is the case, the turbulence could have been severe and the pilots made a decision to save the aircraft rather than wait for approval,” he added.

Anthony Brickhouse, a member of the International Society of Air Safety Investigators, said it “is not atypical to have a pre-programmed flight path and then something happens and the pilots try to adjust it”.

“Airliners in general tend to avoid thunderstorms as much as possible to give passengers a smoother ride,” Brickhouse, an assistant professor at Embry-Riddle Aeronautical University, told AFP.

“Right now, the fact that they were trying to avoid bad weather doesn’t tell us a lot in the grand scheme of things.”

Q. Have there been other plane mysteries like this?
Malaysia Airlines Flight MH370 disappeared while flying from Kuala Lumpur to Beijing on March 8 with 239 passengers and crew.

The Boeing 777-200 aircraft is believed to have crashed in the Indian Ocean far off Australia’s west coast after diverting off course for an unknown reason and flying for several more hours over the remote waters.

An intense air and sea search failed to find any wreckage from the aircraft, while an underwater search has been underway for weeks with no result.

Air France Flight 447 crashed into the Atlantic Ocean in June 2009 while on a flight from Rio de Janeiro to Paris, killing 216 passengers and 12 crew. Debris was not found for days and it took years to locate the wreckage. Investigators eventually concluded that both technical and human error were to blame.

Adam Air Flight 574 with 102 people on board disappeared from radar in January 2007, also at its cruise phase during a domestic flight in Indonesia. Debris was found nine days later after an extensive search and it took months to recover the plane’s black box.

In the Air France Flight AF447 crash in 2009, it is believed a build-up of ice on “pitot tube” instruments caused the pilots to receive distorted data on airspeed before the aircraft went down.

“Although any attempt to explain the reason for the disappearance of the AirAsia flight is pure speculation at this time, we can’t but notice at least one apparent similarity with another famous crash: Air France 447,” wrote aviation blogger David Cenciotti on theaviationist.com

He added that low ground speed could have been caused by strong headwinds.

“If the plane happened to be going below stall speed, then well, you will fall out of the sky,” he said.

Can we rule out terrorism or a hijack attempt?
Experts say it is too early to rule out any possibility.

“As an investigator, I am trained to keep all possibilities on the table until evidence suggest otherwise,” said Brickhouse.  “Right now, I have not seen anything that could be associated with any kind of criminal act.”

Why have authorities not picked up signals?
Aircraft have an Emergency Locator Transmitter (ELT), which is designed mainly for when the plane crashes on land and pilots are still trying to control it. In the event of a major crash, it may not work.

The plane also has a “black box” consisting of the cockpit voice recorder and the flight data recorder. If immersed in water they should activate a “pinger” that can draw investigators to the location. However, the sound cannot be heard over long distances.

Soejatman said AirAsia “does not subscribe” to ACARS (Aircraft Communications Addressing and Reporting System) – which sends short messages to ground controllers – even though the Airbus A320-200 is equipped with the system.

He said authorities must move quickly to improve technology that help locate aircraft when they go missing.

“Even with MH370 the beacon did not go off. Why aren’t we getting the beacon in large-scale incidents?” he said.

“I am not saying it is a faulty system. The beacon (ELT) is the best thing we have at the moment. But we have to work on improving it,” he said.

Brickhouse said “advanced tracking technology is out there” but “financial and logistics ramifications come into play in terms of installing them”.

What are the difficulties faced by search teams?
National Search and Rescue Agency chief Bambang Soelistyo said Monday search teams are scouring an area where the sea is 40-50 metres (130-160 feet) deep.

He said Indonesia was coordinating with other countries to access any equipment that may be needed to scour the seabed.

Soejatman said despite the shallow water in the search area, “mud and hard rocks” could interfere with sonar pings emitted by the plane’s ELT.

“We have not been alerted to any South Africans on that plane,” spokesperson Clayson Monyela said. – AFP