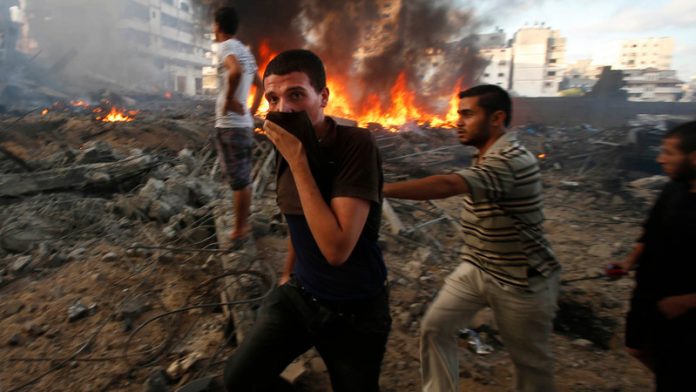 A cartoon published in the Sydney Morning Herald that linked the Jewish faith with the Israeli rocket attacks on Gaza has breached the Australian Press Council’s standards.

The cartoon by Glen Le Lievre was published in July last year alongside a column by veteran writer Mike Carlton. The reaction to the cartoon and the column resulted in Carlton’s sudden resignation.

Six months later, the press council has ruled that the cartoon caused greater offence to readers than was justifiable in the public interest.

The cartoon depicted “an elderly man with a large nose, wearing the distinctively Jewish head covering called a yarmulke, and sitting in an armchair emblazoned with the Star of David”, the council said. “He was pointing a TV remote control device at an exploding cityscape, implied to be Gaza.”

“A linkage with Israeli nationality might have been justifiable in the public interest, despite being likely to cause offence,” the ruling said. “But the same cannot be said of the implied linkage with the Jewish faith that arose from inclusion of the yarmulke and the Star of David.”

The newspaper told the council after complaints were made against the cartoon that, in hindsight, it agreed that it had placed gratuitous emphasis on the Jewishness of its subject “and in doing so, had inappropriately emphasised religious persuasion rather than Israeli nationality, thereby causing offence”.

The newspaper said in its defence that it had published a 650-word apology a week later. It stood by the column but insisted Carlton apologise to readers he had offended in emails. “The images from Gaza are searing, a gallery of death and horror,” Carlton had written. “A dishevelled Palestinian man cries out in agony, his blood-soaked little brother dead in his arms.”

After the column Carlton received a torrent of abuse on Twitter and in emails from people who were angered by his views. &ndah © Guardian News & Media 2015