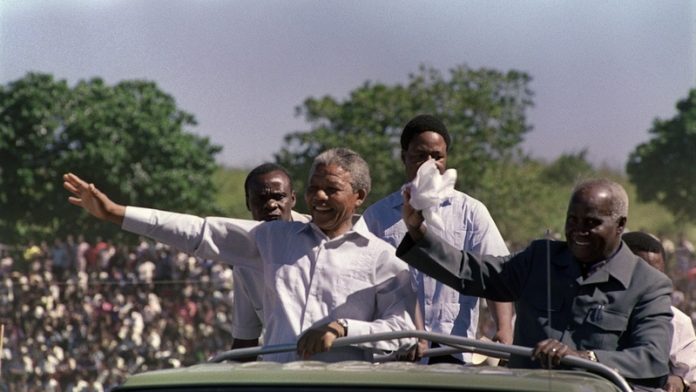 Zambia was just one of many countries my pariah passport had stamped in it as forbidden territory, so I’d flown in with some trepidation, lugging a typewriter, duty-free bottles of whisky and KWV 10-year-old I’d been told would be appreciated, along with a creased teletext from the ANC – my “visa”.

Given the multiple delegations that had beaten a path to Lusaka, customs was a breeze. My passport remained unstamped, to avoid difficult questions on my return.

No one knew when that might be. It was January 1990 and my brief was to dig in, for months if need be, to make contact with as many people as possible. On a working trip to Germany in November I’d watched the Berlin Wall coming down. Officials’ questions there led me to think FW de Klerk intended to wrong-foot the ANC by suddenly announcing its unbanning.

Stretched already by gearing for negotiations and Nelson Mandela’s release, with Oliver Tambo unwell and Soviet Union funding run dry, the ANC would face the added pressure of hundreds of exiles wanting to get home and set up legally.

An ancient Peugeot sedan – favoured by Lusaka’s taxi drivers because it could be driven on its rims when thieves stole the tyres – took me to the low tin-roofed buildings off Cairo Road, the ANC’s headquarters for all its 30 years of exile. Tom Sebina, thrust into the role of official spokesperson, added my gift of whisky to the pile of bottles in the corner of his tiny office.

Ruefully, he informed me that most of the leadership was elsewhere. From others, I learned about life in exile, the layers of secrecy and clandestine structures that meant most cadres were unaware of just how far advanced “talks about talks” were.

Thabo Mbeki was still in Stockholm on February 2, when Jeremy Cronin and Joel Netshitenzhe – then known as Peter Mayibuye – remember being among those huddled around a radio in a house in the upmarket Lusaka suburb of Roma, listening to the words that would ignite hope and fear. FW de Klerk was expected to make a big announcement when he addressed Parliament.

“We half expected the ANC’s unbanning; the big uncertainty was whether it would include the [South African Communist Party]. De Klerk had tried to exclude [Joe] Slovo from the negotiating team, and Tambo and Mandela had rejected that outright,” Cronin recalls.

“In principle, everyone was pleased. The unbanning was good. But there was also the fear that we were being led into a trap, that the regime would allow some of us to return and we would then be held hostage.”

Netshitenzhe immediately drove 15km to the house where politico-military council members, including Chris Hani, Josiah Jele and Joe Nhlanhla, were meeting, to break the news. Jele’s response was laconic: “He said: ‘Is that so?’ They then continued with the agenda of their meeting as if nothing had happened,” says Netshitenzhe.

In the days following, journalists and camera crews flocked into Lusaka from around the world to find the ANC wholly under-prepared to deal with them. Leaders were busy with the first flurry of protracted behind-the-scenes meetings to decide key questions: who’d go in to start negotiations and how to ensure their security.

“There was a sense of life opening up. We knew the struggle would have to continue, though the terrain was changing,” says Netshitenzhe.

“The ANC would have to re-establish itself in the country – how to ensure the mystique it had gained would be retained as it emerged above-ground, what structures needed to be set up, relations with … the civics, the United Democratic Front, Cosatu. We had to talk to other structures in Lusaka, the Frontline states and elsewhere in the world and manage the expectations of people wanting to return home.”

Says Cronin: “The prospect of going back was psychologically difficult for many comrades, especially those who had married partners who were not South African and had children. They survived exile better because they were more integrated. But the going back was more difficult for them.”

Elation was tempered by fear. Says Netshitenzhe: “People appreciated this was a life-changing moment but that we’d have to go through a series of hoops before things normalised. The sense of nervousness, apprehension was always there.

“Some even posed the question that if all of us went back we might face the situation of [Boer leader] Piet Retief and Dingaan [the Zulu chief who killed him], but in reverse – that we were being lured back into the country to destroy the ANC.”

In the crowded foyer of the Pamodzi Hotel, Sebina faced a torrent of abuse from a Radio France journalist; three days after De Klerk’s watershed speech, there was still no official response from the ANC. He wasn’t the only frustrated hack in the pack. In newsrooms around the world, editors were going ballistic.

An unruffled Sebina told journalists that ANC leaders were still jetting in from around the globe; the national executive committee had yet to meet. Still, the fact that no statement had been prepared indicated that the unbanning was something of a surprise for the ANC.

They were preparing to meet the enemy to talk across the table, but outside the negotiating chamber a low-intensity civil war was raging. Jacob Zuma, then head of intelligence, was debriefing Dirk Coetzee in Lusaka about police hit squads and other security force crimes.

I remember one night being seated at dinner near Coetzee as he breezily related how squad members braaied chops and wors while the bodies of the men and women they’d murdered burned to a crisp on nearby pyres. I looked at Coetzee and then at the half-eaten steak on my plate, and made it to the restaurant bathroom just in time to vomit.

Celebrations only came later. “The sense that this was real came on the day that Mandela was released,” Netshitenzhe recalls. “We spent the day at Steve Tshwete’s house, waiting and waiting for his actual release. We listened to his speech on the radio.”

Two weeks later Mandela, finally reunited with his comrades, was being fêted in Lusaka by president Kenneth Kaunda. Waiting for him, some South African journalists had talks long into the night with Mbeki, Pallo Jordan, Netshitenzhe, Tshwete, Albie Sachs and others.

For Cronin, who re-entered South Africa in May, preparations included “a lot of shredding of documents”. Babysitting his son Benjamin, he let the three-year-old assist. “He got his little finger caught, losing a joint and a half … his war wound.”

Towards the end of my stay, a group of us travelled out of the dusty capital to a popular shisa nyama. We were black, white, coloured and Indian. We ate freshly grilled meat, drank beer and danced in the afternoon sunshine. The future was uncertain, but there was, at least, a future.