Maimane to Zuma: You are not an honourable man 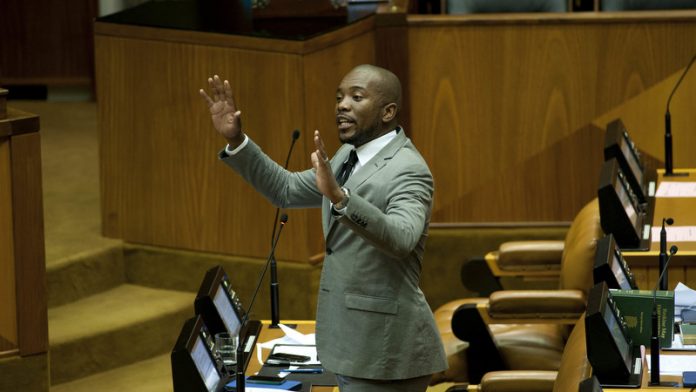 In a debate on Zuma’s State of the Nation Address, Maimane said the main cause of South Africa’s problems was that democratic institutions were undermined to protect a single man.

“This honourable man is in our presence here today,” he added. “In these chambers just five days ago, you broke Parliament.”

Maimane said he was using the term “honourable” out of respect for Parliament and warned Zuma that it did not apply to him personally. “Please don’t take it literally because you are not an honourable man. You are a broken man presiding over a broken society.”

Assault on democracy
He described the deployment of armed police to drag EFF MPs out of Thursday night’s joint sitting as an assault on the foundations of democracy, and Zuma’s chuckle after the incident as a insult to the country, reflecting the gulf between him and the nation.

“We will never ever forgive you for what you did on that day.”

Earlier on Tuesday, presiding officers Baleka Mbete and Thandi Modise defended the use of police to remove MPs from the National Assembly.

Opposition parties have condemned it as a violation of the constitutional separation of powers.

Malema cockroach insult
The parliamentary debate kicked off with the EFF complaining about their leader being called a “cockroach”.

EFF leader Julius Malema asked National Council of Provinces chairperson Thandi Modise to raise his party’s concerns with National Assembly speaker Baleka Mbete. This after she called him a cockroach at the weekend.

The matter was first raised by EFF chief whip Floyd Shivambu, after which Malema also jumped up to raise a point.

Modise asked him if he was insisting on speaking, prompting him to want to know why only he had to “insist” to get a chance to talk, causing a murmur in the National Assembly.

Modise asked members to be quiet, but called them “comrades” instead, before quickly correcting herself, saying “honourable members”.

Malema quipped: “That’s what we are dealing with here – comradeship”.

Modise asked him to withdraw.

“I did say honourable members, in South Africa we are all comrades,” she said, adding that he was her comrade not too long ago.

Raising concerns
Malema then continued to talk about his concerns that Mbete called him a cockroach. “Please take our concerns and raise them with her [Mbete],” said Malema.

Modise replied: “Do not make me preside and rule over a presiding officer. I said I would convey what the feelings of this House are around the utterances … “

“I think we must leave it at that. I will convey the message and the sentiments of the House.”

The Mail & Guardian reported that Mbete dug into the EFF during her address to the party’s North West provincial congress on Saturday, speaking in her capacity as ANC national chairperson, accusing the opposition party of working with some western countries in their quest to take over South Africa.

Mbete said that as part of her strategy to weaken the EFF, ANC deployees must work hard. “If we don’t work we will continue to have cockroaches like [Julius] Malema roaming all over the place”.