Move over, Big Brother, for a ready-made EFF soapie 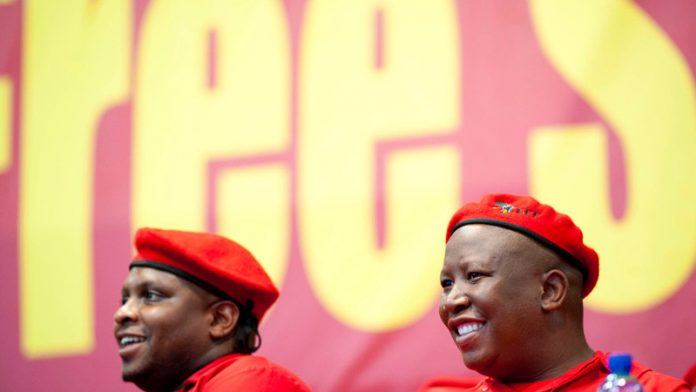 If a scriptwriter was to pitch the goings-on in the Economic Freedom Fighters (EFF) to a commissioning editor as a soap opera, it would probably be rejected as being too over the top.

There are the larger-than-life characters: Julius Malema, Floyd Shivambu and Andile Mngxitama. Then there are the claims of excessive spending, theft, spying, backstabbing, murder plots and bounties on MPs’ heads.

But what is a soapie without broken relationships and blossoming romances? In the EFF’s case, it is a flowering bromance. But that’s in a later episode of the drama.

The scene opens when two men, known for obscenely expensive tastes for Breitling watches and German luxury cars, start their crusade to make a comeback in politics after being purged from the house of their parent ANC – cue Malema and Shivambu.

They then cross paths with a charismatic character, a purist mostly, hailing from the Black Consciousness movement, Mngxitama.

Together they cook up a storm: the birth of the EFF.

Honeymoon setting
Mngxitama punches the air every time Malema shouts the charterist “Amandla!” he speaks about his “commander-in-chief” like a young, unquestioning bride about her charming spouse. Their honeymoon setting: the green benches of Parliament as red-clad opposition MPs.

But soon the space between their parliamentary seats grows – figuratively, of course. The glow starts to dim, and their ideological differences start to rear their heads. It is the beginning of the end.

When the party, now a force to be reckoned with, finally convenes its election conference, one thing is certain: there will be losers. Malema and Shivambu take up the top leadership positions and a slighted Mngxitama falls out of favour.

Fast forward to last week and the initial, subtle divisions have become a bloody battle. There was “fighter on fighter” violence at a media briefing when Mngxitama took on Malema publicly, accusing the EFF leader of corruption and graft.

“Julius wants to kill me,” Mngxitama said in an interview with the Mail & Guardian this week. “EFF leaders want to kill me. What we are saying is making them hire people to stab me.”

He claims that his commander is behind an elaborate plot to hire a hit man to annihilate him.

“I have been briefed by national intelligence. My life is in danger.”

Unconfirmed government protection
The M&G could not independently confirm whether the State Security Agency has offered him protection.

“There are people who also believe what we are saying [the allegations about some top EFF leaders]. They are paying for my security,” he said.

The same people pay for his transport – a luxurious Mercedes – though Mngxitama refused to name them.

“I am not going to tell you who they are. If I tell you, do you want EFF leaders to come and kill me? Huh?”

But why is there a bounty on his head? He claims it’s because he’s exposing wrongdoing in the EFF, particularly about financial misconduct.

But Malema seems unfazed by the claims. “If they have proof, they must go to the Hawks,” he said.

Crusade to save the EFF’s soul
Mngxitama and his three fellow EFF rebel MPs – Mpho Ramakatsa, Khanyisile Litchfield-Tshabalala and Lucky Twala – say they are on a crusade to “save the soul of the EFF” from its “Louis Vuitton” leaders, Malema and Shivambu. They are calling for the party’s national people’s assembly, its inaugural elective congress, to be nullified and for an external audit of the party’s financial books. All four have been expelled from the EFF.

Malema denied the accusations made about him by the four. “Do you think we will crook the books and give Baleka Mbete [the speaker of the Assembly] more ammunition against us?”

He denied taking a cent from party funds and said the EFF’s finances would be audited and made public after they had been submitted to Parliament.

Shivambu also denied tucking into party funds. “But, like they say, drowning three men and a woman would cling on a straw. All those things they say are lies and can be independently verified by credible institutions,” he said.

But, as the 007 creator Ian Fleming could have told you, all elaborate plots need a dubious businessperson or two lurking in the shadows. This is where the ex-convicts and former EFF supporters Gayton McKenzie and Kenny Kunene enter the fray.

The EFF leaders have claimed that the two are using Mngxitama to cause an upheaval in the party.

Soured relationships
Kunene and McKenzie were friends with Malema and Shivambu, but the relationships soured after Kunene left the EFF amid allegations of bitter disagreements.

“Those [Kunene and McKenzie] are not my friends,” Mngxitama said confidently. “They are Floyd’s friends.”

But as any soapie writer will tell you, you can’t feed viewers only a diet of violence, threats and paranoia.

Last Saturday afternoon, a relaxed Mngxitama was seen dining happily with McKenzie at an upmarket restaurant in Cape Town’s V&A Waterfront. Next to the table were Louis Vuitton shopping bags.

Mngxitama told the M&G his meeting with McKenzie had nothing to do with EFF battles. “I am interested in book publishing and Gayton published many bestselling books,” he said.

McKenzie said Mngxitama was not his friend and he had nothing to hide.

“I was friends with those two [Malema and Shivambu], who I gave money to. If you take money from me, behave like someone who took money from me. Now it is personal … When I am done with them, there will be nothing left of them,” he said.

But the EFF leaders are not buying Mngxitama’s explanation about the blossoming bromance. They have vowed to remove him from the party.

But he said he would cling on. His mission remained to “save the soul of the EFF”, even if it meant “going into exile”.