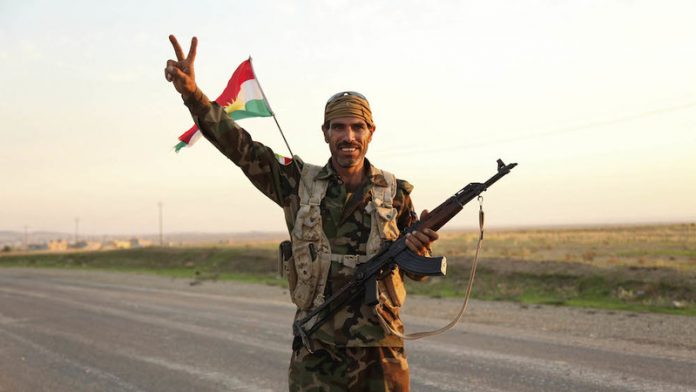 When Shvan, who is a Kurd, returned home to Zumar in northwest Iraq and saw his property had been reduced to rubble, he found an empty house belonging to an Arab and moved his family in.

Now, life is gradually returning to the town, which was seized by the Islamic State (Isis) in August 2014 and then captured by Kurdish forces with coalition air cover in October.

A schoolgirl walks home past shattered buildings while men sell food by the roadside. There are plans to restore water and electricity.

But it will prove harder to repair relations between Kurds and Arabs in what was once a mixed town. Zumar shows how the demography of northern Iraq is changing in the aftermath of the Isis incursion and Kurdish and Shia counterattacks, turning neighbour against neighbour and redrawing the map.

Zumar is located in the disputed territories to which both the Kurds and the Iraqi government in Baghdad lay claim. Before Isis came, the town was under the control of Iraqi federal authorities.

Now the Kurds are in charge and they have no intention of letting go. Since the militants left, shopfronts and garden walls have been daubed with graffiti that reads: “Reserved for Kurds”, “Kurdish house”, “Kamal Kurdish” and “Mohammad Kurdish”.

Only Kurdish residents are returning to the town and, like Shvan, those whose homes were destroyed are taking the houses of Arabs they accuse of helping Isis to overrun it. Shvan said the house he now lives in belonged to an Arab who joined the militants and went with them to their self-proclaimed caliphate when he was forced to flee.

When the Kurdish peshmerga forces advanced on Zumar in mid-October, the entire Arab population left for areas under Isis control, including Mosul.

‘No trust between us anymore’
“Whether the Arabs should come back or not is up to Kurdish authorities, but I personally don’t want them to return,” said Kurdish resident Mohammad Abdulrahman. “There is no trust between us any more. They took our belongings, plundered our homes and destroyed them.”

Kamal Majid’s telephone number is written on the façades of two houses in Zumar. He said his two sisters, both married to Arabs, had lived there and he tagged them because he worried they would be looted by fellow Kurds.

Majid, who is married to an Arab woman himself, said he hoped Arabs who did not side with Isis would come back and be compensated to avoid further problems with Kurds in the town.

“While there were some problems in the past between Arabs and Kurds, they lived together in relative harmony,” he said.

Elsewhere in Iraq, entire towns and villages are being abandoned by their Sunni Arab residents as Shia militias retake them from Isis. When the United States assistant secretary of state for human rights, Tom Malinowski, visited Iraq earlier this month, he highlighted the issue of revenge attacks by the Shia militia and Kurdish peshmerga forces and told the authorities these attacks were unacceptable.

In a recent report, Human Rights Watch condemned the abuses by Shia militia who were forcing Sunni Arabs to abandon their towns and villages, leading to huge demographic changes in Diyala and Salahaddin provinces.

“Iraqi civilians are being hammered by Isis and then by pro-government militias in areas they seize from Isis. With the government responding to those they deem terrorists with arbitrary arrests and executions, residents have nowhere to turn for protection,” the report said.

When Kurdish forces captured Zumar and its surrounding area from Isis in October, they flattened some villages they accused of co-operating with the militants and turned others into ghost towns. Villages where the residents did not assist Isis appear to have been left untouched.

Although thousands of Kurds fled Zumar as Isis approached, many Arab residents stayed – some because they sympathised with the Sunni Islamist militants and others because they were not a target or had nowhere to go.

Sunni Arab Salem Ahmed, who served in the Iraqi army, was one of those who left. He fled his village of Abuni, outside Zumar, as Isis – known locally as Daesh – made its advance, and returned with the other residents after peshmerga forces took Zumar and its surrounding settlements.

‘They are criminals’
“Daesh doesn’t represent us; they are criminals,” said Ahmed, surrounded by his mother and several children while a group of peshmerga removed about a dozen improvised explosive devices left by the militants in an outhouse. “God bless the peshmerga; they treat us with respect.”

West of Zumar is Sinjar, where Isis is said to have massacred thousands of Yazidis and enslaved about 5 000 girls and women.

Mass graves are being discovered by members of the minority who are returning to the area after Kurdish forces drove out Isis in December.

Angered by these gruesome discoveries, some Yazidis are taking revenge on Arab neighbours they accuse of collaborating with Isis. Last month, a group of Yazidi militiamen entered two Sunni Arab villages near the Syrian border and massacred more than 20 people, with 17 still unaccounted for.

When a Yazidi militia attacked the Sunni Arab residents of Sibaya, near the Syrian border, Salah Mohammad, a farmer, asked one of the men why they were attacking his village. The militiaman replied: “You started it.” – © Guardian News and Media 2015

Islamic State (Isis) militants have kidnapped more than 200 Christians in northeast Syria as the jihadis retreated in the face of a Kurdish counteroffensive, a monitoring group has said.

The reported kidnappings are the latest blow to the Christian presence in the region, heightening insecurity after a video was released by militants claiming allegiance to Isis that purported to show the beheading of 21 Egyptian Copts in Libya.

The Syrian Observatory for Human Rights said the Assyrian Christians were kidnapped by Isis near Tal Tamr. There was heavy fighting in the area between the militants and the People’s Protection Units (YPG), the Kurdish militia that, backed by a United States-led coalition, beat back an advance on the border town of Kobani last month.

The YPG has launched a counteroffensive to retake villages in the northeastern Syrian countryside.

The observatory said its sources on the ground had overheard Isis militants on radios refer to the captives as “crusaders”, the same term used by militants to describe the Egyptian Copts apparently killed in Libya.

Isis militants have often singled out Christians and minorities for persecution. Thousands of Christians fled Iraq’s Mosul and Nineveh after its lightning advance last year, fleeing their ancestral homelands amid reports of forced conversions.

Many took refuge in Kurdish-held territories or in Lebanon. The Isis rampage through Iraq’s Nineveh plains cleared Chaldean Christians and other minorities from areas in which they had coexisted for more than 2 000 years.

The jihadi group was especially brutal towards the Yazidi minority in Iraq, attempting to starve thousands who were stranded on Mount Sinjar. It also sold Yazidi women into slavery.

Coalition air strikes had earlier targeted Isis fighters near the Syrian Kurdish stronghold of Qamishli on the Turkish border.

More than 1 600 people, mostly from Isis, have been killed by the US-led coalition air strikes in Syria, according to the observatory.

Many of the jihadi casualties – an estimated 1 400 – took place in the Kurdish town of Kobani on the Turkish border. – ©?Guardian News and Media 2015