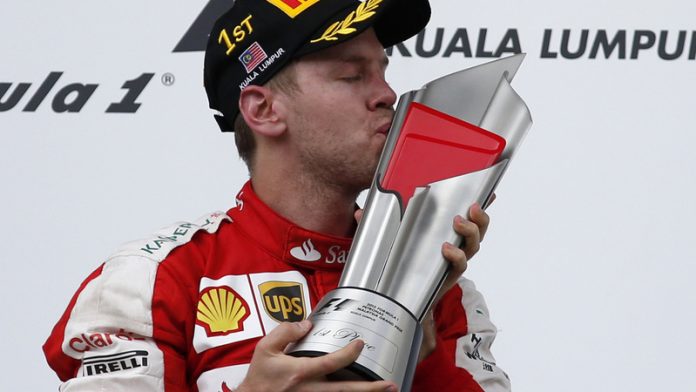 Sebastian Vettel made appropriate amends by breathing life into a season, which after only one race had appeared in danger of becoming moribund.

Vettel’s victory in Sunday’s Malaysian Grand Prix, his first since the last race of the 2013 season and the 40th of his career, did more than that; it proved that, even though F1’s business plan is in more bits than you will find in the Manor garage, it will survive, not only through the essential strength of its brand but because of its curious ability to produce rare excitement even when none is expected, or even deserved.

Most wise judges had already awarded the 2015 season to the hitherto dominant Mercedes team and the drivers’ title to the sensational Lewis Hamilton, who frankly has his team-mate Nico Rosberg in his zipped pocket.

That assessment is still likely to be borne out. But in a resonate statement of intent Ferrari, the biggest and most glamorous of all F1 teams, cleared their throat and announced their long overdue return to meaningful motor racing. And Formula One with Ferrari doing well – if not quite as well as they did in the early years of this century – transforms the sport.

Last season, when they achieved only two podium positions and failed to win a race, was their worst for 21 years. Their last win was in the 2013 Spanish Grand Prix on 12 May of that year. And Vettel, the champion of the previous four campaigns, appeared to be a celebrity travelling in bashful incognito in 2014, his final season with Red Bull.

So the German’s deserved victory here came as an adrenalin rush for him, Ferrari and F1, and even the vanquished Mercedes will benefit from it.

The triumph of Ferrari and their new leading light was merely the highlight of a thoroughly entertaining race. Pit stops were suddenly back in fashion in the searing heat – the temperature on the track was 61C when the race started – and there were more passing moves than you could shake a flag at.

And even those British fans disappointed by Hamilton’s defeat, and by Jenson Button’s slightly less surprising retirement, could still divine vicarious delight from the rare exuberance of Ferrari’s quite exceptional technical director James Allison. For Allison, now of Maranello and the man who made the black horse prance once more, comes from Lincolnshire. And he loves cricket.

At the end of the race, when Vettel’s tears streamed down his face, Allison’s less publicised emotions were just as moving. “I just wanted to dance around and scream and shout and hug all my friends and colleagues who I’ve have gone through this journey together with,” he said. “Our mood is so linked to how that bit of rubber and plastic and metal does on the track. And when you have a day like today it’s electrifying.”

Allison had five years with the Scuderia earlier in his career, and after leaving witnessed the team’s decline into mediocrity. He rejoined Ferrari in the summer of 2013, and had little to do with the preparation of last year’s car. But the 2014 model bears his stamp.

He added: “It’s good to win in anything but there is something absolutely fantastic about this team. At Ferrari, we work especially hard, but we also have the history and tradition of the team bearing down on our shoulders.

“Everywhere you go in the factory, there is the past evidence of their massive success and anyone who works there when it is not successful is cowed by that. But there is also the weight of expectation of an entire nation.

“Those things are pressures that we soak up and when the pressure is released by a day like this, boy, does that feel good. Everybody here won’t be able to find proper words to express what they feel.” He did well enough.

Ferrari’s two-stop strategy was a winner when some cars were required to come in four times for fresh rubber. Hamilton and Rosberg, who finished second and third respectively, each came into the pits three times.

It was also a triumph of sorts for Vettel’s team-mate, Kimi Raikkonen. Despite starting in 11th place, and then having a puncture which put him to the back of the field, he managed to finish fourth, ahead of the Williams pair Felipe Massa and Valtteri Bottas.

The race took its vividly exciting shape as early as the fourth lap, when the safety car came out following Marcus Ericsson’s spin-off into the gravel on turn one. Hamilton and Rosberg came straight in to fit the hard tyre; Vettel stayed out until lap 17 and throughout the race benefited from his car’s better use of the rubber, preferring the softer medium tyre.

When Hamilton made his third and final pit stop on lap 38 he was 14 seconds behind Vettel and, although the world champion was able to claw back some of the time, he never threatened to change the destiny of the race.

For some time it was an encouraging display by McLaren, especially in the context of their recent travails. Fernando Alonso was ninth when he had to retire, giving plenty of time to contemplate his decision to quit Ferrari, while Button was as high as 10th before turbo problems finished his afternoon.

Apart from Vettel and Raikkonen, the happiest man of the afternoon was, perhaps, Max Verstappen, the 17-year-old in a Toro Rosso, whose team-mate Carlos Sainz finished immediately behind, both ahead of their Red Bull seniors.

But the day belonged to Ferrari, and in particular Vettel.

On Friday, Ecclestone, praising Hamilton’s ability to represent his sport, added: “I told Sebastian ‘you should be doing what he’s doing.’ ”

Vettel took Ecclestone’s words quite literally, winning a race with some of Hamilton’s brio and in so doing lifting the sport out of its introspective doldrums. – © Guardian News and Media 2015