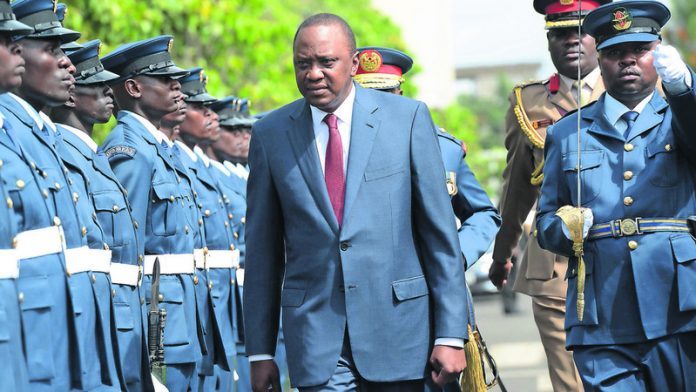 Kenyatta said “no one would stand between Kenyans and what is right in the fight against corruption”.

Also named on the “list of shame” are principal secretaries who are the chief accounting officers in the ministries of transport, defence, and water and irrigation. The 175 were named in a report by the country’s Ethics and Anti-Corruption Commission, Kenya’s graft agency.

After the list was made public this week, some of Kenyatta’s allies claimed they were being “targeted unfairly”. Lands secretary Ngilu said her constitutional right to be presumed innocent until proven guilty had been violated. She is accused of inflating the price of a piece of land in return for a KSh65-million (about R8.4-million) kickback. Koskei allegedly allocated permits to some businesspeople to import sugar without following an open tender process, thus violating procurement laws.

The report has given a rare insight into the depth of corruption in Kenya, where the scourge is rarely addressed by the state. Government data estimates that Kenya loses more than KSh300-billion (R39-billion) in corruption every year – a third of its annual budget.

Public pressure
By Wednesday, in an unprecedented move, government officials and politicians continued to step aside – but not down – from their offices as public pressure piled on the anti-graft agency to take to court all those named after the expiry of a 60-day investigations window.

Ironically, the opposition Orange Democratic Party (ODM), which had strongly criticised the government for failing to tackle graft, has condemned the report, saying the list did not include deputy president William Ruto, whom it labelled the “high priest” of corruption.

Mention of former lands minister James Orengo, a trusted ally of opposition leader Raila Odinga, and the Nairobi governor, Evans Kidero, who is also from the opposition, are understood to be behind the opposition’s change of heart.

Orengo was linked to an irregular disposal of public land in Nairobi’s Westlands by a private developer. The transaction was allegedly done at Orengo’s office and the anticorruption watchdog says he received a KSh5-million (R657 353) bribe.

The country was especially shocked by the inclusion on the list of Kenya’s auditor general Edward Ouko, who is accused of defrauding the World Bank by more than doubling the budget to KSh500-million (R65.7-million). His office is also accused of paying KSh100-million (R13-million) in advance for Audit Vault, a security product, sourcing only one quotation.

The purge’s biggest challenge is that it is spearheaded by a government whose top leadership has remained in office despite having faced charges for crimes against humanity at the International Criminal Court (ICC).

No moral authority
Kenyatta remained in office as he fought the charges in The Hague, but now calls on public officers to step aside. The ICC withdrew charges against Kenyatta last year for lack of evidence. The opposition has said Kenyatta’s deputy, Ruto, has no moral authority to speak on the fight against corruption as he is still fighting charges at the ICC.

Two parliamentary committees are facing dissolution after they were also linked to the corruption saga.

Regional governors, through their chairperson Isaac Ruto, Bomet’s governor, have dismissed the purge, saying the president has no legal mandate to ask elected leaders to step aside.

The Constitution says impeachment, death or incapacity are the only reasons a governor can be removed from office.

At least 13 governors, including Ruto, Evans Kidero (Nairobi), Alfred Mutua (Machakos) and Samuel Tunai (Narok), were named in the report.

This has given ammunition to critics of Kenya’s devolution system who say the governors have extended corruption to the grass roots.

Some of those named have been the most vocal defenders of devolution. Ruto, a fierce critic of the Kenyatta government as the chairperson of the council of governors, is fighting corruption allegations. He is accused of irregularities in hiring ambulances from Kenya’s Red Cross Society at a monthly cost of KSh650?000 (R85?455), on a tender that was based on only one quotation.