Attacks on Satawu leaders could be due to infighting 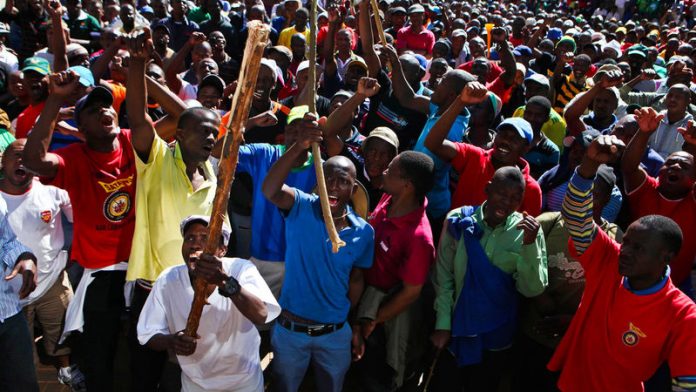 Fingers are being pointed to internal hostility and divisive leadership battles in the South African Transport and Allied Workers Union (Satawu) as it reels from the assassination of its provincial secretary and an attack on its president in one night.

Other leaders are now fearing for their lives as police investigate the separate incidents.

At close to midnight on Monday, Satawu President June Dube was asleep in his Vosloorus home in the East Rand with his wife and three children when his home was petrol bombed.

Unknown men threw a petrol bomb into his lounge, shattering the window and setting the room alight.

A four year old child was in the house.

When police arrived to investigate and take down statements, Dube’s phone rang.

He was told of the news that Satawu provincial secretary in Gauteng Chris Nkosi was gunned down near Germiston.

Nkosi was driving home after dropping off his body guard in downtown Johannesburg, when he was shot five times through the door of his car.

“It was only then that I heard about Chris. I don’t know what to make of it yet,” Dube told the Mail & Guardian.

Death threats
He said he fears for his life as the union beefed up all leaders security.

“We want the police to tell us what is the cause of these things,” Dube said while admitting that he and other Satawu leaders have been receiving death threats.

Satawu has shown signs of fragmentation in recent months with the union facing serious money problems.

Last month staff members were not paid on time.

Satawu general secretary Zenzo Mahlangu said in a statement that they urge anyone with information about the incidents to come forward.

“We want the law to take its course and for a thorough investigation so the perpetrators are brought to book.”

Acting general secretary of Cosatu, Bheki Nshalintshali called for calmness within the union and within the trade union federation.

“We cannot afford to lose any of our leaders or to have their houses bombed at a time when we are preparing for an open war against capital,” he said.

Cosatu itself is in internal turmoil as it faces unprecedented divisions sparked by the expulsion of its former general secretary Zwelinzima Vavi.

Seven affiliated unions are to decide whether they would remain in the trade union federation or leave in protest.

Losi’s on a mission to rebuild Cosatu