Several dead as xenophobic violence boils over in Durban 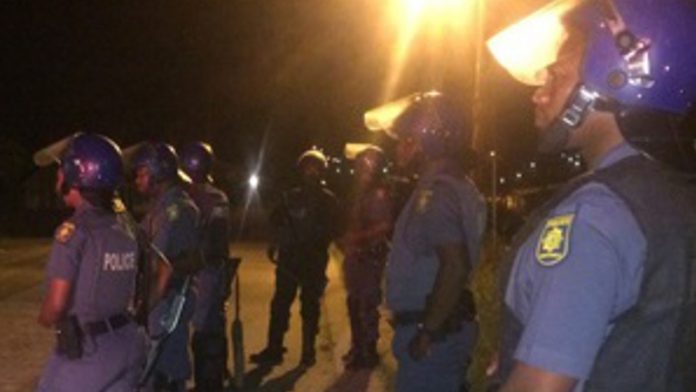 Several people have been killed and thousands more displaced as the violent attacks on the basis of ethnicity continued unabated.

On Monday night, KwaMashu was electric as gangs moved from shop to shop.

To date, the sporadic violence had only been seen in Durban’s southern basin.

Hundreds of police officers, deployed to the city from all corners of KwaZulu-Natal, were stretched thin as thousands of people descended on foreign owned shops.

As officers battled to protect foreign nationals who desperately tried to salvage what was left of their belongings, locals forced their way into shops and made off with food and goods before setting the shops ablaze.

Overrun
Officers from the Public Order Policing Unit, specially trained to disperse and disarm violent crowds using non-lethal methods, were overrun as shops were looted in several sections of both Umlazi and KwaMashu at the same time.

The police officers, clad in full riot gear and armed with shotguns, raced from section to section and waged bitter battles against looters who retaliated with bottles and rocks.

The eThekwini Metro fire department is understood to have deployed several engines to KwaMashu alone, as looters torched shops and homes that belong to foreign nationals.

Tear gas, stun grenades
This came after a team of police officers were deployed to the city centre to disperse a group of men – several hundred strong – who had gathered at the Dalton Men’s Hostel.

The group was prevented from damaging shop fronts when they were rebuffed by officers using tear gas, stun grenades and a water cannon.

The upsurge in violence and criminality follows an effort from local and provincial government to reintegrate thousands of displaced foreign nationals back into their communities by encouraging them to return to their homes.

The latest attacks are part of a tide of anti-foreigner sentiment, which has spread to Durban’s largest townships.

The spate of xenophobic violence, which has left four people dead and thousands displaced, follows reported remarks by Zulu King Goodwill Zwelithini that foreigners should “pack their bags and go home”.

The onslaught of xenophobia is reminiscent of similar attacks in 2008 which left over 60 people dead and scores wounded.

Running for our lives
A Somali shopkeeper, protected by heavily armed riot police, loaded what remained of his stock into a bakkie in Lindelani, near KwaMashu, on Monday night.

Bashir Mahmoud (27) said he had not slept for six days fearing he may be killed and his general dealer – his entire livelihood – plundered.

About 200 people stood at a distance, kept at bay by police. The locals laughed and jeered as Mahmoud loaded what he could into the bakkie.

They eventually broke into another shop abandoned by its former owner. Two children struggled under the weight of a washing machine which they pulled from the shop, and disappeared into the night.

Outcasts
“I have not been able to sleep. First I worried that they might kill me and now I find myself here, where I am trying to close my store because they will take everything,” Mahmoud said.

“The government says that we are welcome here, but that is not the truth. These people will take everything and take your life. We are outcasts.”

The shopkeeper, who has plied his trade in Syria, said South Africa had become hell on earth.

“This is what we have been reduced to … running for our lives. We are trying desperately to leave, but all the trucks are busy. All the brothers are trying to flee.”

Earlier in the night, another Somali-owned shop in a shipping container was doused in paraffin, but police chased the vandals away before they could set it alight.

In Lindelani, police rushing to the scene of a shooting happened upon a shop where the owners were clearing out their stock. Police had seen a group of South Africans closing in and warned them off, only to be pelted with rocks and stones. – News24.com