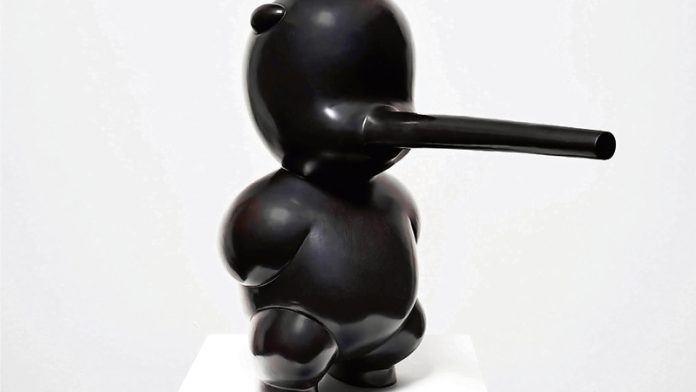 Okay, so maybe Brett Murray’s new exhibition, Again Again, has a few suggestive protuberances. Some are merely belly buttons, but one is definitely a tottie as they say in Afrikaans. But comrades fearing the slings and arrows of Murray’s outrageous sense of humour need not worry.

There are no gratuitous sexual appendages added to his swollen animal bronzes and steel reliefs depicting comic book characters. And definitely none in his outsize figure paintings of dead tyrants. Nothing in fact that is likely to require a rent-a-crowd outside the premises of the Goodman Gallery in Woodstock, Cape Town.

This begs a question. Has Murray, a self-described “Che Guevara of the suburbs”, been chastened by his experience following the uproar over his 2012 painting depicting President Jacob Zuma with his penis exposed? The short answer: maybe.

Where his previous two shows, both titled Hail to the Thief, shot satirical arrows at the ruling party, Murray’s latest solo sees him return to a more generic brand of political satire.

Take his gold leaf encrusted steel relief Masked, which shows a naked cherub bearing a panga and sporting a thief’s mask. Who is this boy with the small penis? He could be anyone who has ever illicitly dipped a hand in the honeypot for personal gain, be it a politician, a tenderpreneur, a benefits cheat, or even a pavement hoodlum using a xenophobic chant to excuse brazen theft.

Ditto Murray’s anthropomorphic bronze depicting a cartoon pig with Pinocchio-length nose. He, or for that matter she (I checked, no penis), could be anyone who has ever told a lie. This sculpture is also a nifty update of Porky Pig, a pop icon birthed in Depression-era America.

In a show that sees Murray revisit his love of comic book iconography, the meaning of both these works is, however, not entirely generic. Political power, and its “venal abuse” as Murray put it during a speech at his book launch last year, lingers like an eMalahleni smog over his show.

Seductive bronze pieces
Our collective passivity in the face of this perceived abuse is also noticeably skewered. Entering Again Again, one encounters Somnambulance: Harry, a steel relief depicting a bespectacled zombie figure, his arms outstretched in classic B-movie style. Is he a citizen? A voter?

Upstairs, there are seven more of Harry’s friends, adult zombies representing both genders. And much more. Like the first iteration of Hail to the Thief, Again Again includes a number of Murray’s formalist bronzes, seductive pieces that loop back to his late-1980s graduate work at the University of Cape Town.

They include a Janus-faced pig with two of the same face, a dwarf gorilla with its face planted in the wall, and a pair of bulls standing back-to-back, belly buttons protruding.

Speaking at the launch of his self-titled monograph early last year, Murray admitted that his infamous “dick joke” prompted some “prevarication” afterwards. Was he racist? Was he an arrogant white? Were his jokes no funnier than Leon Schuster’s?

Ritual noise and political irresolution
Conundrums matched but lots of double guessing. During his talk Murray also remarked: “It’s just a pity that all the work I have produced up to The Spear, and all the work I will make going forward will always be seen in relation to this event.”

At its core, the debacle around The Spear replayed what are now defining features of contemporary South African politics: ritual noise and political irresolution. In a departure from his usual media, Murray essays this impasse, and the substantial noise it continues to generate, in a sober two-channel video work.

Triumph, as it is titled, shows two male actors – one is black, the other white – interpreting the same political script. Wearing exactly the same suit, they gesticulate and raise their voices.

Making political art
“Long live the nation!” they chime as this nearly seven-minute work reaches its shouted crescendo. “The Party is me! I am the nation, just as you are the nation. And together we are the chosen people!”

Sure it’s unfunny and didactic, but the punchline is easily comprehended. Much like in another work, Call and Response, where Murray lays bare his current temperament. “I must not make political art,” reads a mantra-like sentence on black panel. The sentence is repeated row after row.

Like Bart Simpson, who forever writes out his punishment at the start of The Simpsons, Murray is a refusenik. The corresponding panel to his mantra contains only one sentence: “You are a corrupt fuck!”