When the long wait for treatment turns deadly

Johannes Mnguni sits slumped over the kitchen table in his home in Siyabuswa, Mpumalanga. At one end of the sparsely ­furnished room is a plastic tub containing a child’s bicycle with training wheels. The voices of children playing can be heard outside. But these are not his children.

“They are the neighbour’s children. They used to play with my daughter – they do not understand that their friend has left.”

Mnguni sent his 14-year-old daughter and five-year-old son to live with relatives in a nearby village after his wife died nearly three months ago. And now, for the first time in 22 years, the 51-year-old is living by himself.

“My children have never lived with anyone but me and their mother. So it is not well with my heart,” he says. “Whenever I see other children I wonder if mine are alright. When I hear a child crying to their parents I wonder who my children turn to. I am the one they are supposed to turn to, but I’m all the way out here.”

However, Mnguni says he knows that his concerns are unwarranted because his children are with family and visit him every weekend. “I’m the one who is struggling because they’ve never lived with anybody but me.”

But he has made up his mind that for the rest of this year he will do all he can to make sure that the nurses he believes are responsible for the deterioration of his wife’s health are held accountable.

“I only sent them there so that I can deal with the mistake of their mother’s death.” 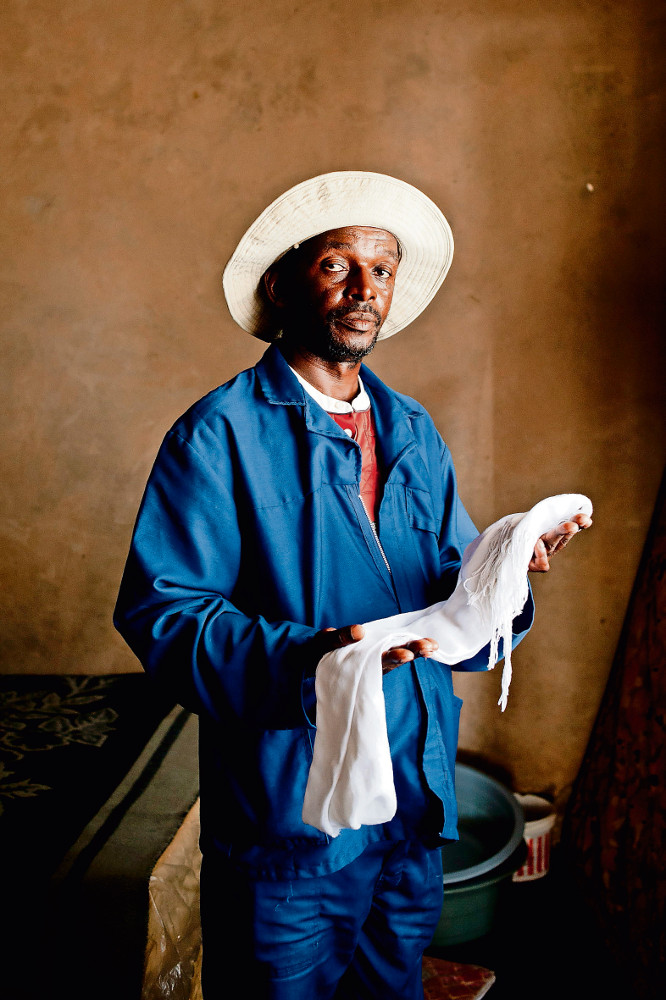 Bereft: Johannes Mnguni holds a scarf belonging to his late wife. He says clinic staff sent him from pillar to post when he sought medication

No treatment
For the past five years Mnguni’s wife, Ntombi Mthimunye, had been treated as an outpatient at the Steve Biko Academic Hospital in Pretoria. She had a condition called myasthenia gravis, an auto­immune disorder caused by an abnormal response of a person’s immune system against components of their body.

Franclo Henning, a neurologist at the University of Stellenbosch, says that, in the case of myasthenia gravis: “The person’s immune system produces antibodies against receptors on muscle cells. These antibodies block the receptors and prevent signals from the nerves getting through to the muscles.

“Patients develop weakness of different muscle groups. Very mild cases will have weakness of only the eyelids and muscles that move the eyes, leading to drooping eyelids and double vision. More severe cases may [result in] weakness of swallowing, chewing and the limb muscles,” says Henning.

“The most severe cases may develop weakness of respiratory muscles, leading to shortness of breath and sometimes to admission to ICU [an intensive care unit] for respiratory support [this is called a myasthenic crisis].”

In October 2014, Ntombi’s treatment was transferred from Steve Biko Hospital to the Siyabuswa Community Health Centre, which is only a few blocks from her home.

In a letter seen by the Mail & Guardian, the neurologist who had been treating Ntombi at the hospital wrote down all the medication that she would need from the Siyabuswa Community Health Centre.

In the letter, the specialist wrote a six-month prescription and said that he would follow up every six months. But this never happened because she died four months after the letter was written.

Although myasthenia gravis is not curable, it is controllable. Henning says that patients receiving treatment may in some cases no longer show symptoms and, in most cases, patients’ symptoms improve substantially.

“Treatment consists of medication to enhance neuromuscular transmission and suppression of the immune ­system by immunosuppressive medication. If the thymus gland is enlarged or if there is a tumour in the gland, it has to be removed. We also remove the gland if there is a poor response to treatment or if the patient experiences intolerable side effects.”

If treated correctly, Henning says, and the patient takes the prescribed treatment, they can have a normal life expectancy.

Ntombi’s treatment included azathioprine, an immunosuppressant; mestinon, which helps strengthen muscles weakened by the condition; calcium gluconate, which is used to treat low blood calcium levels; and tramadol and salve for the pain. 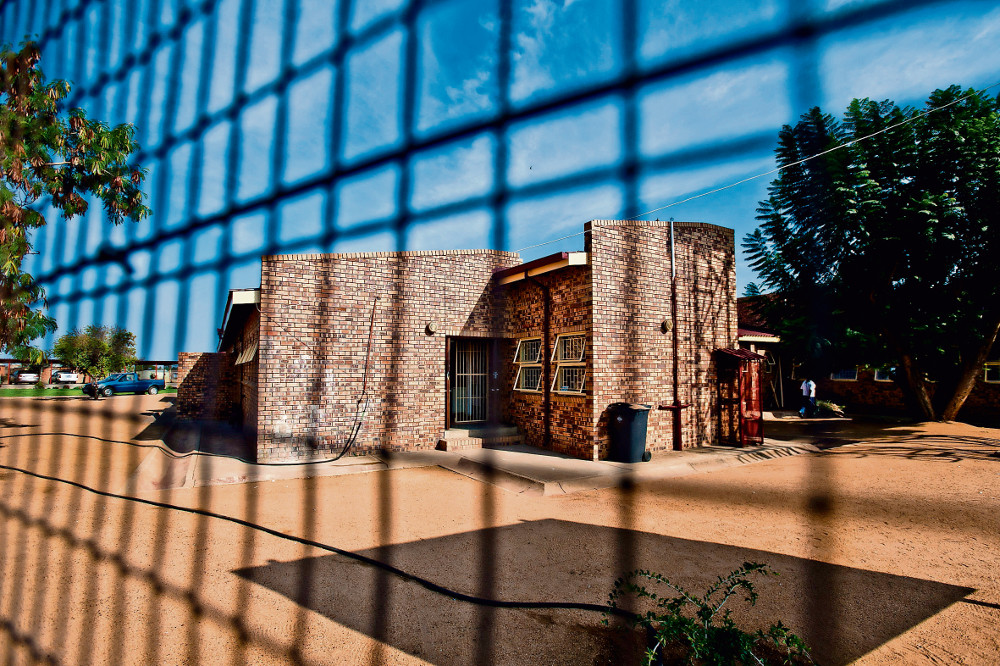 Fateful move: Johannes Mnguni says that his wife stopped receiving the medication she needed to manage her illness after she was referred to the Siyabuswa Community Health Centre for treatment

Pillar to post
Counting off on his fingers, Mnguni says: “She was transferred last year on October 5. November, December, January – for almost four months she didn’t get her medication. Every time I went to the clinic [to fetch her treatment] they’d tell me: ‘Come back next week, you’ll get the medication.’ Then I’d go back and they would tell me to come back the following week.”

Alarmed by the rapid deterioration of his wife’s health, Mnguni went to the Nkangala district health office in November last year, after his wife had not received treatment for a month. But he was told that he had to speak to the management at the clinic first and only approach the district if the facility management failed to address his complaint.

“I wasn’t aware of their protocols. My problem was that my wife was not getting the treatment she was meant to be getting from the clinic,” he says. “I told the nurse at the district office that, with all this protocol, by the time I got to her my wife would be long dead.”

The day after he had been to the district office, Mnguni went back to the clinic.

“When I got there I met sister Ntuli, the head nurse at the clinic. She made a phone call to Mmametlhake Hospital [to order the medication] and told me to come back the following week and I will get all the medication.”

But he had been hearing that for the past few weeks to no avail.

“I had already taken my wife to Mmametlhake Hospital for a blood transfusion on the advice of a private doctor who had seen her. I was worried that, if she didn’t get her medication, she would need another transfusion.”

Mnguni went to the clinic again on Christmas Eve.

“When I got to the dispensary I was immediately told that sister Ntuli was not there. I told them that I was not there to see her but to collect my wife’s treatment. They said to me: ‘We said sister Ntuli is not here. You can come back on January 24 when she is back from leave.’ I went to the clinic on January 25 and found her.”

He was told that the clinic would send a nurse to his house to give Ntombi her treatment as she was too ill to come to the clinic at that point.

On the morning of January 28, Mnguni woke his wife up early to get her ready.

By 6am he had bathed and fed her. An hour later Mnguni went outside to wait for the nurse. As he was sitting under the big avocado tree in his yard, Mnguni saw a white sedan with a department of health sticker on the door drive past on the tar road behind his house.

“I walked out into the road and I could see the car parked a few blocks away. I tried to go after the car but it drove even further away. I came back home thinking that maybe it wasn’t the car that was supposed to come.”

Hours later the same car pulled up in front of his gate.

“I said to him [the nurse]: ‘Come on in because my wife has not received any treatment in a long time’.”

When Mnguni got into his house, he realised that the nurse was still sitting in the car in front of the gate.

“He was just sitting in the car doing nothing. It was after he had been sitting there for a long time that I went out again to call him. I was impatient because I was under the impression that he had the medication. That is all I wanted. But then I realised that he was stalling because he didn’t have the medication with him – he only had two small containers of salve.

“After four months of not getting any treatment, that is all he had brought for my wife,” says Mnguni, his voice thick with emotion.

“We took her to the clinic around 11am. The ambulance only came to take her to the hospital around 4pm.”

Ntombi died in hospital a week later on February 3.

Mnguni doesn’t know for certain what his wife died of because nobody from the hospital explained the cause of her death to him. The hospital had notified Mnguni’s brother-in-law, who called him a day later.

Henning says: “Untreated myasthenic crisis is fatal. Furthermore, if a patient ­develops a myasthenic crisis and is admitted to ICU, they are prone to complications that may arise in ICU, such as infections, organ failure or a pulmonary embolism [blood clot in the lungs].”

Henning estimates that 10% of people with myasthenia gravis “have a tumour of the thymus, of which some are malignant. It is standard practice to screen all patients diagnosed with ­myasthenia gravis for a tumour or enlargement of the gland by means of a CT scan of the chest. “

In documents seen by the M&G it is written that Ntombi was a known breast cancer patient. But Mnguni didn’t know this and also didn’t know the exact condition his wife suffered from.

But he is adamant that his wife’s death was premature and could have been prevented had she received the prescribed treatment.

“She was fine for years when she was being treated at Steve Biko [Hospital]. She ended up in hospital because she hadn’t been getting her treatment. If the clinic didn’t have the medication, why didn’t they refer her to a place that could help her?”

After repeated requests for comment over a period of three weeks the Mpumalanga health department did not respond to questions posed by the M&G.

Mnguni is adamant: “The clinic is not sorry about anything. They don’t care.”