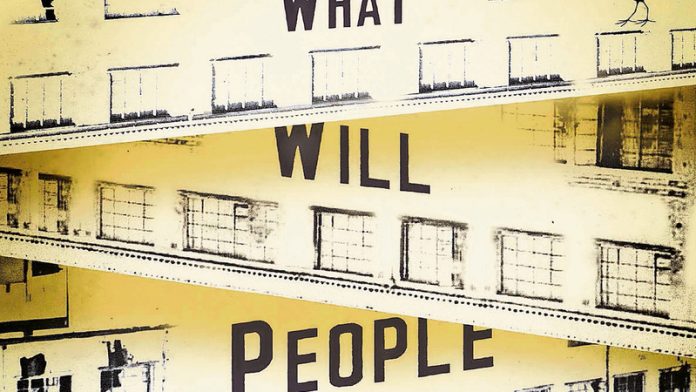 WHAT WILL PEOPLE SAY?
by Rehana Rossouw (Jacana)

Though fearlessly straightforward and in-your-face, this novel is not nearly as dire as its opening sentence might suggest: “The South-Easter lifted the smell of pig manure spread across farms in Philippi, crossed Lansdowne Road and dumped it like wet poep over Hanover Park.” But you could read this as a warning.

It’s 1986 when we first meet the Fouries, who live in a flat in one of the many rows of three-storey blocks that are a feature of Hanover Park. They seem ultra-respectable – their three teenage children are at school, both parents have good jobs. But even so, decent folk that they are, their lives are affected by the gangs, drugs and other madnesses of the Cape Flats.

In the 2006 movie, Babel (Alejandro González Iñárritu), the four interlinking stories of families on three different continents showed how even the best of parents cannot always protect their children. They may not even know what is happening to them, a scenario that scares the hell out of parents everywhere.

In the Fourie household, Magda, wife and mother, calls the shots. She’s a factory manager in the clothing industry – an essential part of the Cape Town economy – and also a strict and staunch member of the congregation of the Church of the Eternal Redemption. Her children start telling her little fibs to avoid her vigilance; for her eldest daughter this leads to escape and success, but for her darling only son, Anthony, it leads to a situation he does not have the resources to control.

“There was nothing better than a skyf while he was hanging out at the shebeen with Ougat’s ouens. He was learning to sabela, to speak prison slang. The dagga loosened the ouens’ tongues and the stories they told were bemoer.”

What happens to Anthony is a heartbreaking read and not for the faint-hearted, but far worse befalls an innocent schoolgirl friend. A minor theme, subtly laced into the story, is the position of women in the community, on the streets and taxi ranks, in their homes. In the Fourie home, there is respect, but elsewhere some gross and habitual abuse.

Rossouw has her finger on the complexities of Hanover Park. She shows us the activities of the newly formed neighbourhood watch, trying to counteract the gangs. Neville, the father, goes out on patrol armed with no more than a torch. The middle daughter, Nicky, aspiring to be the first lawyer from Hanover Park, is drawn into student politics at the time of the 10th anniversary of the 1976 Soweto Uprising, when youngsters are boycotting school, their leaders are arrested and detained, troops in armoured vehicles are patrolling the townships.

Rossouw’s plain but pacey narrative style is spiced up with Cape Flats slang, lots of “bemoer” and “befokte”. But a few lapses into the poetic reveal a great love for her hometown, such as when she says of the southeaster, “The wind had gone off to make some other place miserable” and, of an aspiring model, “an outrageous mixture of beauty from round the world” and that she had “green eyes flecked with fynbos”.

She deals compassionately with the often conflicted and confused lives she describes.

Despite her unsparingly hard look at the reality of life – how siblings fail each other, how a wife drives her loving husband away, how gossip becomes “fact” – where she describes violence and rape there is not a shred of pleasure taken in it.

It’s a riveting read, and will lie close to the hearts of many readers, while others will learn much they could not imagine for themselves.

Rehana Rossouw will be part of the M&G Literary Festival session, South Africa at a Fork in the Road, with Steven Friedman, Louis Picard and John Saul and chaired by Adam Habib, on Saturday August 1 at 1.30pm