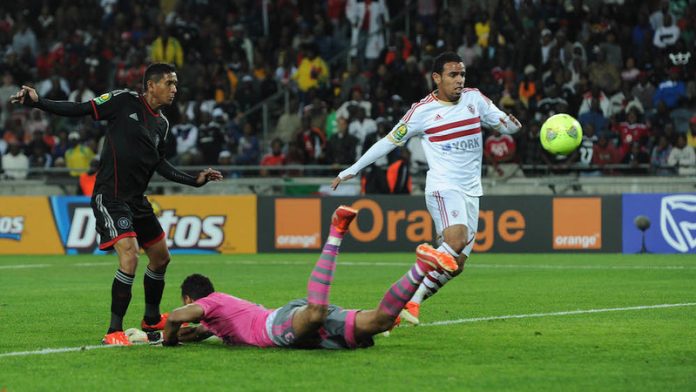 The White Knights come striding into town for what has the potential to be an epic battle against Orlando Pirates in their CAF Confederation Cup Group B clash in Mpumalanga on Saturday afternoon.

Egypt’s giants Zamalek have found success hard to come by over the past decade as they lie low in the shadow of their bitter rivals Al-Ahli, but are now on the brink of winning their domestic league for the first time since 2004.

They hold a six-point lead over Ahli with a game in hand and face the delicious prospect of winning the title at their city rivals on July 21. But before then they are up against another side riding the crest of a winning wave in Pirates, with the Soweto side cementing their reputation as comfortably the country’s greatest export to African club competition.

The 1-0 victory over Congolese club AC Leopards in Dolisie a fortnight ago got their pool stage campaign off to a superb start and, if they can follow that up with a home win over Zamalek, they would have a few toes in the semifinals. And they do have recent history to point to for some comfort.

These two sides met in the group stages of the 2013 African Champions League when Pirates ran out 4-1 winners in their home fixture, though they would go on to lose 2-1 away. Pirates coach Eric Tinkler was assistant to Roger de Sá during that magical Champions League campaign when Pirates beat the odds, and some of the continent’s best, to reach the final before falling short against Ahli.

Arduous campaign
That experience has hardened them and they have built on the lessons learnt from what was an arduous campaign. But Tinkler warns that their opponents will also have gained much knowledge from their previous defeat.

“I don’t think Zamalek will make the same mistake they made two years ago when they played an open game and we beat them 4-1 at Orlando Stadium in the Champions League,” Tinkler said this week. “I think they will have learned their lesson from that game. They’ll pack their defence and try to hit us on the counterattack.”

Tinkler acknowledges the strength of the Cairo club but he has also identified a suspect defence. “I have watched their recent domestic matches, including their 1-0 win over Sfaxien [in the Confederation Cup]. They are tactically very strong and a top side,” he said. “They have certain weaknesses in defence which we can exploit. That is where my attack has to be on the ball.”

Tinkler believes three wins will be enough to get his side into the semifinals and, having gained one of those already on the road, they can take themselves to the brink of that on Saturday. “I reckon nine points will be enough to get through. But it is vital to win our home games and try to sneak in points away from home, like we did against Leopards, and we’ll be home and dry.”

Pirates have taken 34 players, including two trialists, to Mbombela City for a pre-season camp that also serves as a build-up to this match. Only those 30 registered for the Confederation Cup can play and Tinkler has a near full selection to choose from, bar key defender Siyabonga Sangweni, who has been given compassionate leave after a family bereavement.

Zamalek have much more serious selection issues, with six of their players on the casualty list. They also received a huge scare on Monday when captain Hazem Emam picked up a knee injury in their 3-0 league success over Ismaily.

Major doubt
He is a major doubt for the Pirates game, but there was some luck when Burkina Faso defender Mohamed Koffi survived a car accident on his way back from that fixture with only a few scratches. He has travelled to South Africa for the game and will be available for selection.

But Zamalek coach Jesualdo Ferreira, who recently had his contract extended by a month to the end of July, believes he has found a new gem in Nigeria striker Maarouf Yussuf. Yussuf starred in the win at Ismaily when Ferreira admitted his side flagged in the second half, which will not have gone unnoticed by Tinkler.

“I have confidence in Maarouf. He is a good player and his outstanding performance was a good thing,” Ferreira said. “We played against a strong and respectable team and we managed to score two early goals to end the game early. We suffered from fatigue in the second half and that allowed them to shine but finally we scored the third to ensure our victory.”

Aside from their fixture two years ago, Zamalek also met Kaizer Chiefs in the second round of the Champions Cup in 1993, losing 2-1 in Soweto but claiming a 1-0 success at home to advance on the away goals rule.