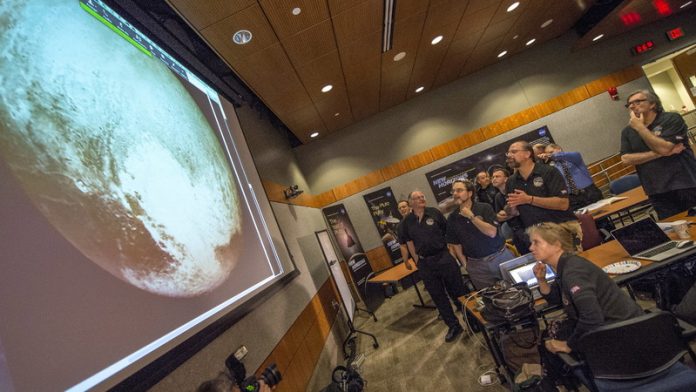 Nasa’s New Horizons spacecraft passed by the ice-and-rock planetoid and its entourage of five moons at 7:49 EDT (11:49 GMT). The event culminated an initiative to survey the solar system that the space agency embarked on more than 50 years ago.

Pluto just had its first visitor! Thanks @NASA – it’s a great day for discovery and American leadership. pic.twitter.com/FfztBSMbK0

About 13 hours after its closest approach to Pluto, the last major unexplored body in the solar system, New Horizons phoned home, signalling that it had survived its 49 000km/h blitz through the Pluto system.

Managers had estimated that there was a one in 10 000 chance a debris strike could destroy New Horizons as it soared just 12 472km – about the distance from New York to Mumbai – from Pluto.

But right on time, New Horizons made radio contact with flight controllers at the Johns Hopkins University Applied Physics Lab outside Baltimore, sparking a wave of shouts and applause from an overflow crowd that had gathered to watch the drama unfold.

With 99% of the data gathered during the encounter still on the spaceship, the survival of New Horizons was critical to the mission.

“This is a tremendous moment in human history,” said Nasa associate administrator for the science mission directorate John Grunsfeld.

Looking back
New Horizons spent more than eight hours after its closest approach looking back at Pluto for a series of experiments to study the planet’s atmosphere and photograph its night side using light reflected off its primary moon, Charon.

Sending back its first post-flyby signal took another four-and-a-half hours, the time it takes radio signals, travelling at light speed, to travel the 4.88-billion km back to Earth.

Already, the trickle of images and measurements relayed from New Horizons before Tuesday’s pass by Pluto has changed scientists’ understanding of this diminutive world, which is smaller than Earth’s moon.

Once considered an icy, dead world, the planetoid has yielded signs of geological activity, with evidence of past and possibly present-day tectonics or movements of its crust.

“This is clearly a world where both geology and atmosphere climatology play a role,” said Alan Stern, New Horizons lead scientist with the Southwest Research Institute in Boulder, Colorado. He said it appears that nitrogen and methane snow fall on Pluto.

Radical changes
Pluto circles the sun every 248 years in a highly tilted orbit that creates radical changes from season to season. Pluto travels closer to the sun than the orbit of Neptune before it cycles back into the solar system’s deep freeze more than 40 times farther away than Earth.

Scientists have many questions about Pluto, which was still considered the solar system’s ninth planet when Nasa launched New Horizons in 2006. Pluto was reclassified as a “dwarf planet” after the discovery of other Pluto-like spheres orbiting in the Kuiper Belt, the region beyond eighth planet Neptune. The objects are believed to be remnants from the formation of the solar system 4.6-billion years ago.

“Now the solar system will be further opened up to us, revealing the secrets of distant Pluto,” British cosmologist Stephen Hawking said in a message broadcast on Nasa TV.

“We explore because we are human and we want to know. I hope that Pluto will help us on that journey,” Hawking said.

It will take about 16 months for New Horizons to transmit back all the thousands of images and measurements taken during its pass by Pluto. By then, the spacecraft will have travelled even deeper into the Kuiper Belt, heading for a possible follow-on mission to one of Pluto’s cousins. – AFP

Worship during lockdown – in a different way

The bishop uses WhatsApp to share scripture readings, and prayers and comments with all his congregants during the lockdown
Read more
Business

Wearing a face mask? Get a free orange

Soweto based young professional, Nhlanhla Mohlauli has decided to plough back into his community by helping entrepreneurs in the informal economy
Read more
National

You know, this coronavirus thing, I just feel, if South Africans can stick together, we’ll get through this
Read more
Opinion