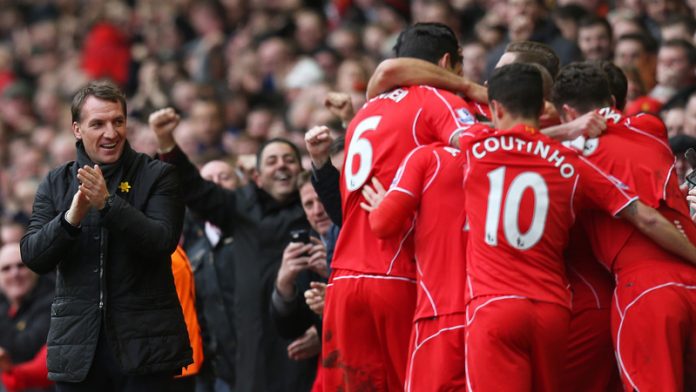 Brendan Rodgers’ reaction to the release of the 2015-16 Premier League fixtures in mid-June would have made for an interesting sight. Up first for Liverpool: a trip to Stoke. Not what any club would want, but ever the optimist Rodgers may well have greeted the news with a smile. Here, after all, was the chance to make an immediate amends for arguably the lowest moment of his managerial career, to quickly right an almighty wrong.

To many Liverpool supporters it is now simply known as “the 6-1”. That scarcely believable afternoon last May when their team were humiliated at the Britannia Stadium. It was a rotten way to end what had been a rotten season and a wretched denouement to Steven Gerrard’s 17-year association with his boyhood club. Afterwards, with Liverpool having finished sixth in the Premier League and 25 points behind the champions, Chelsea, Rodgers accepted his job was on the line. “I’ve always said if the owners want me to go, then I’ll go,” he said.

But Rodgers survived and is poised to begin a fourth season in the Anfield hot seat. He is under pressure like never before and that is why a return to Stoke exactly 11 weeks after Liverpool’s biggest thumping in more than half a century may just be what the team and their manager needs. Ghosts can be laid.

Rodgers is a polarising figure and what is dividing many before the new season is the Northern Irishman’s credentials as a top-level manager. His backers will point to the 2013-14 campaign as proof that he is a forward-thinking, inspirational leader, capable of amalgamating players of varying talent and temperament into one of the most breathtaking teams English football has seen, and one that came agonisingly close to winning the club’s first league title in 24 years.

Rodgers’ critics, on the other hand, will shift attention to last season when Liverpool looked devoid of ideas and character on numerous occasions, failing to make any sort of impact in the title race as well as meekly surrendering to Aston Villa in the FA Cup semifinal and exiting the Champions League at the group stages.

The truth lies somewhere in the middle. Rodgers is neither the second coming nor the emperor’s new clothes. What he must prove, however, is that the 2013-14 campaign was not a flash in the pan and that, under his charge, Liverpool can reestablish themselves as a genuine force in English football. At the very least, they need to be contending for a top-four finish until the very last stages of the season.

What doesn’t help the manager’s cause is a second successive summer in which he has lost a key player. Raheem Sterling may not be Luis Suárez but he was an important element of Rodgers’s plans. Aged 20 and having been at the club since he was 15, Sterling was meant to be Anfield for some time. Instead he moved to Manchester City   amid much acrimony.

Losing a player of Sterling’s quality and potential was a blow for Liverpool and the fear for many of their fans has been that the £49-million City paid for him would not be reinvested wisely. After all, when Suárez moved to Barcelona last summer, Liverpool’s transfer committee, of which Rodgers is a part, took the £75-million they has got for the Uruguayan and, alongside another £31-million, signed nine players who largely ranged from the unproven to the unremarkable in order to beef up the squad and fit in line with the strategy of the owner, Fenway Sports Group, to get “maximum value for what is spent”.

A sensible long-term approach but in the short term the result was disastrous. Liverpool endured their worst start to a league campaign in 22 years, and although Suárez’s absence was an obvious factor, as was the long-term loss through injury of Daniel Sturridge, it was also the case that the vast majority of those who arrived in the summer simply did not come to the fore. Indeed the only one who can be deemed to have had a good season was the Germany Under-21 international Emre Can.

A lack of goals was Liverpool’s biggest problem, with the two forwards they brought in, Mario Balotelli and Rickie Lambert, scoring just three between them in the league. The team simply cannot afford to be so blunt again if they are to progress, and in that regard Sturridge’s absence until October after hip surgery and the departure of Liverpool’s two leading scorers from last season, Gerrard and Sterling, are unhelpful to say the least.

However, the purchases of Roberto Firmino and Christian Benteke suggest Rodgers and his fellow committee members have this time made the right moves to ensure the team are not short of firepower.

Firmino built a reputation during his four and a half years at Hoffenheim as being a tactically intelligent forward with an unrelenting work ethic. Remind you of anyone? OK, he’s no Suárez either, but for £29m Liverpool appear to have signed a player who, unlike Lambert and Balotelli, suits their style of play under Rodgers. And although the 23-year-old Brazil international is not a prolific goalscorer – he got just seven in 33 appearances for Hoffenheim last season – he knows how to provide opportunities for others. Indeed, no player created more goalscoring chances in the Bundesliga during the past two years (138) than Liverpool’s new No11.

If Firmino’s job is to supply the ammunition then Benteke’s is to fire the bullets, and a record of 49 goals in 101 games for Aston Villa shows the 24-year-old can do just that. Despite this, the Belgian’s arrival has not gone down well with all Liverpool fans, with his £30m-plus fee and sizeable frame bringing about Andy Carroll flashbacks.

Such comparisons are somewhat unfair – Benteke is a far more mobile player than Carroll, able to drive into space and directly at opposition defenders, with and without the ball. Yes, the £32.5-million fee is high, but unlike with Carroll in 2011, and indeed with Balotelli last summer, Liverpool did not make their move in a blind panic – Benteke was a long-standing Rodgers target. “He’ll fit our tactical idea of the game and he can be a huge player for us,” said the manager.

Two other forwards have arrived: Danny Ings from Burnley and Divock Origi, from Lille, who was actually one of the nine players purchased last summer but remained with the French club for an extra season. Both are raw but also have the attributes to fit into Rodgers’ style of play.

Some would suggest the signings of Firmino, Benteke and Ings, alongside those of James Milner, Nathaniel Clyne, Joe Gomez and Adam Bogdan, show that for a second successive summer Liverpool have pursued a quantity-over-proven-quality transfer strategy, but the club were simply not in a position to shop at the top end of the market having failed to qualify for the Champions League, and what they can at least be praised for is acting quickly and decisively in regards to their transfer business.

And no deal was done quicker than that for Milner, with the midfielder signing on a free transfer from Manchester City just 11 days after the end of the previous season. Aged 29 and with two Premier League titles to his name, the England international provides Liverpool with a level of experience and winning knowhow it requires in the post-Gerrard era. His appears a shrewd move.

Rodgers’ task is to fit his players into a functioning, coherent unit, something Liverpool often did not appear to be last season when the manager took his reputation for tactical flexibility to bewildering extremes. A host of different formations were deployed, sometimes in a single match, with players regularly used out of position. It all came to a head during the “battering at the Britannia” when Liverpool looked lost at sea.

What seems certain is that Rodgers will go with a four-man defence, having deployed a three centre-back system for a period last season, with Milner and the new captain, Jordan Henderson, his midfield bedrock. The top end of the pitch is less easy to call with a host of players vying for first-team places, including 19-year-old winger Jordon Ibe, who caught the eye during Liverpool’s recent tour of Australia and Asia. But one thing is for sure: the team’s attacking shape should centre around Philippe Coutinho. The Brazilian was Liverpool’s one real shining light last season and has what it takes to dazzle for years to come.

It is perhaps unfair that there is so much scrutiny on Rodgers following last season’s failings. After all, he was not wholly responsible for the players who arrived post-Suárez and the players themselves must take their share of blame for how the team performed. But as is the nature of football, it is the manager who carries the greatest burden for failure and, having kept his job while two of his backroom allies in Colin Pascoe and Mike Marsh lost theirs, Rodgers must now prove he was the right man all along.

It will not be easy given the loss of Sterling, the task of bedding in another batch of recruits and juggling a domestic campaign with the gruelling rigours of the Europa League. That’s not to mention a start to the Premier League season in which, post-Stoke, Liverpool travel to Arsenal, Manchester United, Everton, Tottenham, Chelsea and Manchester City before the end of November. But Rodgers has no choice but to rise to the challenge. His job, almost certainly, depends on it.

“I promise I’ll fight for my life and the people in this city,” Rodgers said upon becoming Liverpool manager in June 2012. Now is the time to come out swinging. – © Guardian News and Media 2015

Sachin Nakrani
Sachin Nakrani works from London. Writer & Editor for @guardian_sport I Talk football on @RadioCityTalk every Friday I Man behind @WEULFCbook I Tweeter of random thoughts Sachin Nakrani has over 25765 followers on Twitter.
Facebook
Twitter
WhatsApp
Linkedin
Email
Telegram