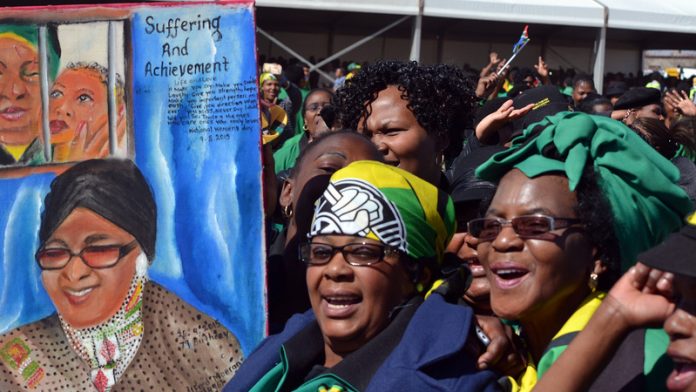 [When] you strike the women, you strike a rock, you will be crushed [you will die]!

In 1913, the first attempt to make black women in South Africa carry passes was made in the Orange Free State; black men had already been forced to carry reference documents for some decades. Passes were a symbol of back South African’s lack of freedom of movement and inability of its non-white citizens to reside and work where they wished.

In March 1912, the Bantu Women’s League’s handed a petition with more than 5 000 signatures to Prime Minister Louis Botha. When Botha didn’t respond, a group of six women went to Cape Town to present their case to a sympathetic Henry Burton, Minister of Native Affairs, but a year later there was still no response.

On May 28 1913, hundreds of women marched to the centre of Bloemfontein and demanded to speak to the mayor, who said his hands were tied. The next day the women marched into town again and protested by tearing up and burning their passes. During the two marches, 80 women were arrested and 34 of them served two months in prison.

Protests spread into other areas in the Orange Free State including Winburg, Jagersfontein and Fauresmith, and many women were arrested, but they had by then captured the attention of the national media.

The protest against passes spread so vehemently through the Orange Free State that when World War 1 began, the authorities agreed to relax the rule, only to try and reinstate it when the war was over.

Again, opposition took hold and built, and the Bantu Women’s League formed, which became the ANC Woman’s League in 1948, a few years after membership of the ANC was opened to women.

Its first president Charlotte Maxeke received a BSc from Wilberforce University in the United States in the early 1900s, becoming the first black South African woman to obtain a degree. She co-ordinated further passive resistance during 1918 and 1919, but only in 1922 did the South African government agree that women should not be obliged to carry passes.

However, in 1923 the government introduced the Native (Black) Urban Areas Act No 21, curtailing the rights of women and extending the existing pass system so that the only black women allowed to live in urban areas were domestic workers.

In 1952, Act No 67 was introduced by government to amend pass laws, requiring all black men and over the age of 16 to carry their pass books at all times — an act that extended across the entire country.

This endeavour to enforce influx control from the homelands also required blacks to obtain certification of tax payments, authorisation to be within specific areas and an employer’s signature, to be renewed monthly.

The 1950s saw Helen Joseph, Albertina Sisulu, Sophie Williams-De Bruyn and Lillian Ngoyi, among others, forming the Federation of South African Women to addressing the sexism that existed within various anti-apartheid groups, including the ANC. However their focus soon changed and, collaborating with the ANC Woman’s League, they began demonstrating against the pass laws.

On August 9 1956 over 20 000 women of all races, led by Rahima Moosa, Ngoya, Williams-de Bruyn and Joseph, marched through the streets of Pretoria to the Union Buildings to hand over bundles of petitions with more than 100 000 signatures against the new pass laws and the Group Areas Act to then South African prime minister, JG Strijdom, who had arranged to be elsewhere. The petition was eventually accepted by his secretary.

Said President Jacob Zuma in his address at the Free State Woman’s Day rally on 9 August, 2015: “This historic march will forever remain etched in the annals of the history of our country as a major demonstration by women of their determination to crush apartheid [and] colonialism.

“In 1957, women in Zeerust revolted against passes in the villages of Dinokana, Lekgopung, and Motswedi. They refused to collect their passbooks from mobile units. We also salute the women of Gopane village in Zeerust, who organised a march against pass laws, also in 1957.

“Much earlier than that, women had already been playing a visible role in [the] affairs of many clans. We can count women matriarchs like Mantantisi of the Batlokwa, Mkabayi ka Jama of amaZulu and Mantsopa of the Basotho.”

The attitude of trying to ignore the passive resistance in the fifties was pervasive in the government. Protests culminated in the Sharpville Massacre in March 1960, but it took until 1986 for the hated pass laws to be repealed.