Passion for justice shines through 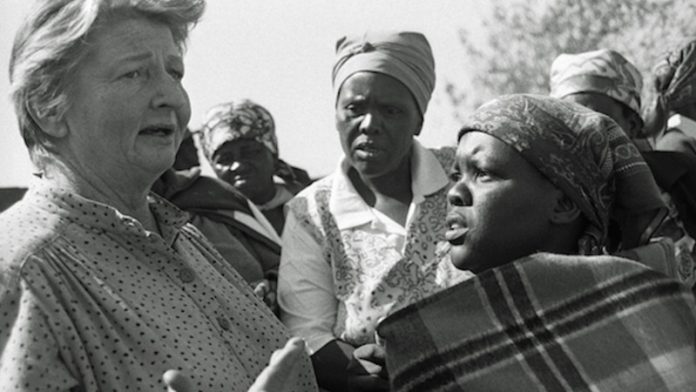 “I think Sheena Duncan    made God proud. God was glad that God had created someone like her — God rubbed God’s hands, said ‘Now this is quite something’.” So writes Archbishop Desmond Tutu (signing himself Arch) in the introduction to Annemarie Hendrikz’s eponymous biography.

Duncan, best known for her leadership of the Black Sash, to which she succeeded after the retirement of her mother, Jean Sinclair, was one among a band of truly extraordinary South African women, as this rich, warm and multi-layered biography makes clear.

In her Author’s Notes, Hendrikz quotes Virginia Woolf: “It is no use trying to sum people up. One must follow hints, not exactly what is said, nor yet entirely what is done”, expressing the hope that “the hints I followed and the fragments I chose will honour Sheena and, with her, some of the other brave women and men of her time who touched her life”. In that she has certainly succeeded.

Along with Duncan’s intellectual brilliance, the qualities that emerge from these pages are her passion for justice, her integrity, compassion, energy and capacity for sheer hard work, her determination, her remarkable talent for leadership and her ability to inspire everyone she worked with — young and old.

With only a domestic science diploma to her name by way of post-school education, Duncan trained herself to become an expert in the intricacies of the legal system, particularly the apartheid legal system. This enabled her to do everything from drafting affidavits for Black Sash Advice Office clients seeking to challenge the Urban Areas Act to analysing complex legislation, homing in on loopholes and weaknesses that could be challenged, while remaining — always — within the law.

“Sheena absorbed information like a sponge, retained it as knowledge and shared it broadly,” writes Hendrikz.

Geoff Budlender, one of the founders of the Legal Resources Centre, who worked with Duncan on the seminal Rikhoto case, which resulted in a judgement allowing migrant workers to acquire residential rights in urban areas, describes her as “one of the most intelligent people I have ever known. She had an enormous amount of knowledge and factual information, and she understood it and could apply it … she learned that formal education has little connection with intelligence. Her ability to identify and articulate essentials … came from working daily with people who didn’t speak the same language”.

Duncan’s role in the Black Sash was by no means the only one she played. Deeply Christian, though never saintly or prescriptive, she was active both in her own congregation and as a lay canon of the Diocese of Johannesburg.

She became a vice-president of the South African Council of Churches along with Thudiso Virginia Gcabashe and, in 1992, the Anglican Bishops of South Africa made her a member of the Order of Simon of Cyrene, the highest accolade that could be given to an Anglican layperson in South Africa.

Among the other issues she was to take up along with her daily work as a counsellor in the Johannesburg Advice Office in the apartheid era were forced removals and the abolition of the death penalty.

In addition, her abhorrence of killing, “through war or any other means”, led her to challenge conscription and she is described by Laurie Nathan, national organiser of the End Conscription Campaign, as one of its “fore-parents”.

Unlike many others, Sheena Duncan did not allow the dawn of the “New South Africa” to put an end to her battle for a better country and a better world. With apartheid put to rest, in name at least, she turned to other issues, among them the fight against the proliferation of guns. She involved herself in the formation of a new network called the Gun Control Alliance and was patron and, later, chairperson of Gun Free South Africa.

What emerges from this extensively researched and deeply considered book is a portrait of a fiercely intelligent, hard-working, dedicated and committed woman who put her all into every cause she espoused and every job she undertook. Along with those qualities came a wonderful sense of humour, a throaty, infectious laugh and a love of life. Duncan was a magnet for friends and family.

She was passionate about the wildness of the bush and the organised peace of her garden. She did exquisite embroidery, cooked wonderful meals and read and wrote voraciously. Homemaker, loving wife, caring mother, loyal friend, few things gave her more pleasure than relaxing on her expansive stoep, cigarette in one hand, glass of something alcoholic in the other, talking, listening, sometimes raging about the topic of the day.

Children are the losers in parental alienation