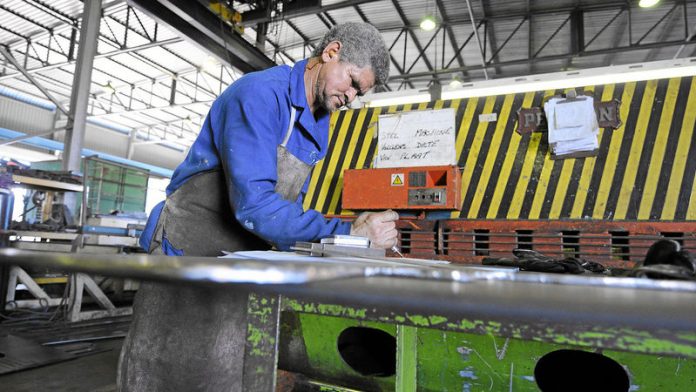 But South African manufacturing is in a perilous state. Manufacturing’s contribution to South Africa’s gross domestic product (GDP) has fallen from 24% in the early 1980s to 13% today, and the number of people employed in the sector has declined by more than 25% over the same period, according to Statistics South Africa’s quarterly employment statistics.

Various dynamics have contributed to South Africa’s deindustrialisation. This goes back almost a century, when the country adopted a policy of import substitution as a vehicle for economic development in the 1920s. Complicated tariff structures, high tariff walls, duties and quantitative restrictions were enacted to protect and nurture domestic industries, according to the International Trade Administration Commission.

Our isolation under apartheid made things worse and, by the end of the 1980s, according to nonprofit research body Trade and Industrial Policy Strategies, South Africa had the most tariff rates, the widest range of tariffs and the second-highest level of tariff dispersion among a range of developing countries.

Decades-long trade protectionism left many companies bloated and inefficient. Post-apartheid trade liberalisation exposed these inadequacies as businesses found it hard to adjust to a more open economy. Since the 1990s, the performance of manufacturers has been cyclical and patchy, subject to the whims of exchange rates, commodity prices and foreign demand.

A confluence of long-standing and recent challenges has made the past few years particularly painful. Unfolding against a backdrop of already weak infrastructure spending, these issues reinforce themselves through a negative feedback loop.

There is no easy cure for South Africa’s manufacturing sector woes. Some issues will ebb and flow; some are permanent. For example, real electricity price increases will remain higher than their historical averages for a long time. It is equally difficult to imagine wages rising by less than inflation. Manufacturers seem to agree. Where labour can be substituted with capital, one response has been to accelerate the rate of mechanisation to do more with fewer workers.

Across the board, from steel to packaging, employee numbers in listed manufacturing businesses have fallen, often by more than 30%, over the past few years. According to Hosken Consolidated Investments, low-return manufacturing businesses are closing down and major parts of certain industries are disappearing altogether. More than 80 000 jobs have been lost in the clothing and textile industries alone since 2002.

The desire of South African businesses to grow offshore is more fervent than ever. From the smallest manufacturers to industrial giants, capital is being redirected to other parts of the world. Our outward-bound foreign direct investment grew 17% in 2014, but foreign investment into South Africa is falling by 23% a year. Foreign direct investment into developing economies rose by 4% in 2014, as shown by Reserve Bank data, indicating we are batting well below the average.

These trends do not bode well. South Africa needs an environment that will facilitate more capital investment. We need to increase our investment in fixed or productive assets such as factories, infrastructure and agriculture to remain globally relevant.

Improving our infrastructure would be one way to start breaking the vicious cycle that plagues South African manufacturing. The sector is important, given its upstream links to mining and downstream links to the infrastructure, construction and automotive sectors. Innovation that reduces cost and improves efficiency is inevitable, but can be complementary with labour employment. South Africa needs both.

Simon Raubenheimer is a portfolio manager and a director of Allan Gray Investment Services.