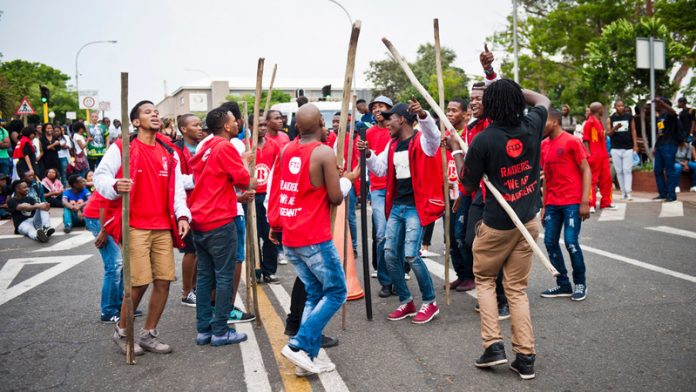 Protesting Wits University students intensified their action on Thursday, marching in formidable numbers on campus most of the day.

The march spilled on to the streets of Braamfontein surrounding the university’s main campus. They took to Jan Smuts Avenue and turned on to Jorissen Street, forcing traffic to come to a brief standstill until the crowd re-entered campus at the gate on Yale Street.

A lone Johannesburg Metro Police Department officer tried to control traffic, while the students largely controlled their march. At one time, the officer told a group: “Don’t close the entire road. Don’t forget you’re Wits students and this is a public road.”

A throng of students at Wits embarked on a protest on Wednesday over what they maintain are exorbitant tuition and residence fee increases for 2016.

In addition to the fervent marches characterised by struggle songs, students blocked entrance and exit gates again on Thursday.

“It’s a complete shutdown,” student leader Mcebo Freedom Dlamini told the Mail & Guardian at the protest. “In the morning we started at medical school, mobilised there and shut the campsus down.

“We then went to education campus and shut it down. Here [Braamfontein] foot soldiers had already shut the gates at 6am. By noon the university had come to a standstill.”

Dlamini said taking the march on to Jan Smuts and Jorissen was necessary. “We’re members of society before we’re students.

“The reality of the matter is that [university vice-chancellor] Adam Habib doesn’t address us as students, but rather he addresses the media and the public.

“So what we wanted is the public to see and hear our cries. That’s the point of demonstrating just outside the university. To our parents, we’re sorry that we’re doing this, but we had to do it because our mothers cannot afford to bring us here next year.”

Robyn Morgan, a white student from the institution’s education campus, hoisted a placard with a message meant to rally the rich.

Her placard read: “Let’s continue to stand up for those who are vulnerable to being left out or marginalised … even if we aren’t ourselves!!! #StandUpForWhatIsRight #Ubuntu.”

Morgan told the M&G she believed the protest was necessary to safeguard the future of poor students at the university and ensure they were not excluded.

“I just think whether you are white, black, coloured or Indian there’s a common goal for this. We are fighting for poor people to be able to study here, too. Our voices will be heard.

“Right now it’s a matter of how much money you have, not about your marks. But what’s the key out of poverty? Isn’t it education for poor people as well?”

Student Sibusiso Kumkani told the M&G Wits fees were spiralling out of control to the point that they threatened access of incoming black students.

But management insisted on Wednesday it had no choice but to implement student fee increments because state funding to universities was declining.

“The subsidy increase from government is expected to come in at around 5% and the net effect is that we have to make up our income to cover our expenditure in order to remain sustainable,” said Wits chief financial officer Linda Jarvis.

“If we do not do so, we put the quality of our academic project at risk. These increases are unfortunately unavoidable but we are doing all that we can, especially at the national level, to look at long-term solutions to resolve the issue of student funding.”

Jarvis added that following extensive consultations with the SRC and other university structures, management reduced the increase in average tuition fee for 2016 from 11% to 10.5% and the upfront fee increase from 10% to 6%.

“We are mindful of the current economic climate and the financial strain on students and families. Even though two-thirds (about 20 000) of our students are on bursaries, scholarships and financial aid, we are cognisant of the pressure that this places on parents and caregivers of those who have to pay their own way.”

Andrew Crouch, who is acting as Wits’ vice-chancellor while Habib is in Durban to attend a summit hosted by the higher education and training department, apologised to non-protesting students and staff for the effect the protest had on them.

“We have received criticism from many quarters and especially from staff who were prevented from leaving,” Crouch said in a communiqué he sent to the university.

“I would like to personally apologise to each and every one who was affected by the protest. The illegal protest was a violation of your rights as staff members of the University and as citizens of this country. Your safety and security is paramount and we will do whatever is in our power to ensure that you remain safe and sound.”