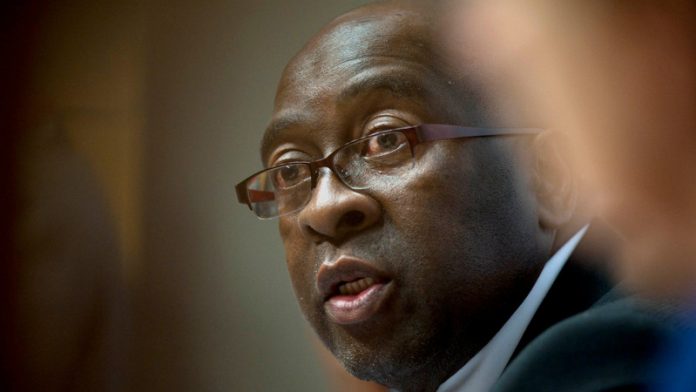 Tough times are indeed ahead but a better future can be created within an “affordable” budget framework, Finance Minister Nhlanhla Nene assured South Africans during his mini-budget speech.

To hammer the point home, Nene punctuated his medium-term budget policy statement speech, presented in Parliament on Wednesday, with one refrain: without economic growth, there is not revenue growth, and without revenue growth, expenditure cannot increase and the nation cannot develop and succeed.

The economic outlook remains miserable. Much lower than February’s economic growth expectations of 2% for 2015 and 2.4% for 2016, the treasury now expects growth of just 1.5% for this year and 1.7% for the next. “Electricity supply constraints, falling commodity prices and lower confidence levels have resulted in our growth forecasts being revised lower,” Nene said.

Government debt has ballooned from 26% to 47% of gross domestic product (GDP) since the 2008 global economic recession, when South Africa instituted countercyclical measures to combat the downturn. That debt remains under control is a key concern for international ratings agencies but the policy statement indicated that, owing to weaker economic performance, projections of the debt level had been revised marginally higher and there was some slippage in the budget deficit compared with 2015 budget projections. “Our projection is that debt will rise by a further R600-billion over the next three years, while stabilising as a percentage of GDP,” said Nene.

The minister gave little away as to what tax reform might be on the horizon for February’s budget, but the policy statement noted that while proposals for additional tax were essential to government’s policy agenda, they would be approached with caution. Under consideration, Nene said, were reforms related to profit-shifting and transfer pricing misuse, mining taxation, small business taxation and value added tax and estate duty. The minister said he had asked for further advice on wealth taxes and said there would be further opportunity for debate on a carbon tax.

Positively, exports have grown faster than imports since 2012, helping narrow the current account deficit, although the gap was still “sizable” at 4.1% of GDP, Nene said. The budget deficit had, in fact, narrowed slightly and was expected to come in at 3.8% of GDP this year and 3% over the medium term.

The economy experienced some respite in the form of lower than expected inflation, which in part as a result of a low international oil price was expected to come in at 4.8% for the year. But a weak rand was expected to contribute to it rebounding in the medium-term, according to the minister.

Nene made note of progress in labour relations, which led to amicable settlements in a number of sectors this year. The policy statement said there were 176 000 workdays lost to industrial action in the first half of the year, down from 7.5-million in the first half of 2014. Further, strikes were relatively short-lived, primarily affecting individual firms rather than entire subsectors.

The minister made clear that the public sector wage settlement had a significant impact on the budget. “The agreement provides for additional costs of 10.1% this year [in wage increases and benefits] and improvements that will be at least two percentage points higher than consumer inflation in the next two years,” Nene said. He explained that treasury’s contingency reserve accommodated the shortfall in compensation budgets, but said departments would still need to shift funding from other priorities to foot the bill. Nene said there would now be no room to expand government employment in the medium term.

“This is not a sustainable situation,” he said. “We need to recognise the need to improve the negotiating process and reform public sector remuneration.”

There is little room for new spending priorities over the next three years, the policy statement said. Nevertheless, government proposed to allocate additional resources to core areas of need, including projects that address urgent social priorities. These included expanding social welfare to accommodate a growing number of applicants.

Nene announced on Wednesday that old age, war veterans, disability and care dependency grants had been increased by R10, effective this month, to bring the annual increase in line with long-term inflation. Over the next three years, the social assistance budget was expected to grow by R13-billion.

But the minister tip-toed around the issue of fee increases at universities, which has seen protests erupt countrywide this week, and no adjustments were made to budget estimates for higher education and training. “It needs to be said that disruption of learning is not constructive,” Nene said. “But Minister [Blade] Nzimande has rightly indicated the need to strengthen student financing further and to find solutions where current arrangements are inadequate.”

Nene acknowledged the dire state of many of South Africa’s state-owned enterprises. “Financing of state-owned companies that are responsible for growth-enhancing infrastructure investments is one thing,” he said. “Relief for entities that should be self-sustaining or that have mismanaged their commercial activities is quite another. This remains a serious risk to the medium-term fiscal outlook.” Nene said work had begun on a legislative framework to regulate state-owned companies and address their governance challenges.

Two substantial allocations not provided for in the budget were funded through the sale of government’s shareholding in Vodacom. Of this, R23-billion went to Eskom and R2-billion was allocated to the New Development Bank, in which the Brazil, Russia, India, China and South Africa (Brics) grouping were to inject capital.

Reforming supply chain management was key and Nene highlighted achievements such as the central supplier database that aim to make the procurement process more efficient and transparent.

Cost containment within government departments had been progressing and numbers showed that, in one year, national and provincial departments cut spending on consultants by 3%, on travel and subsistence by 6% and on catering, entertainment and events by 47%. A further reduction in expenditure in these categories was expected.

Slower growth and volatility would remain features of the world economy for some time to come, said Nene. But within the medium-term budget framework, “government has adapted to this turbulent environment through measures to maintain the health of public finances and support social and economic transformation South Africa needs,” he said.