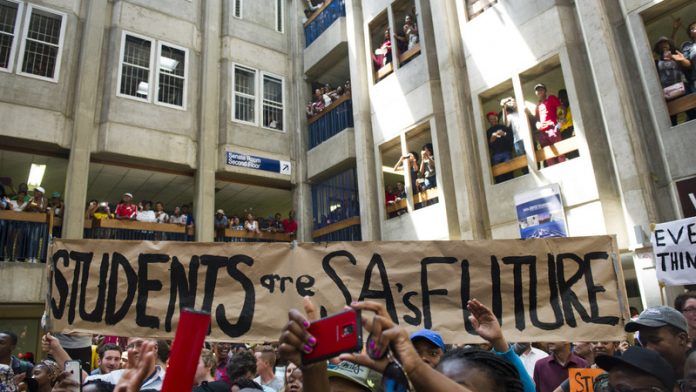 It was a ticking time bomb that “exploded right next to Parliament”, academic Nico Cloete quips about the student fees protests that spilled on to the streets of Cape Town this week.

Cloete, the director of the Centre for Higher Education Transformation, has researched the funding of local universities and has concluded that the government has been critically underfunding institutions and students for years.

“It’s been ticking and who’s been sleeping on it? Both the government and university vice-chancellors have been sitting on it,” he told the Mail & Guardian.

“The vice-chancellors have been sleeping on it because they don’t want to antagonise government on [the] one hand and because they are divided on the other hand.

Although the government’s subsidies to the 26 public universities have increased in monetary terms to the current R26.2?bilion, the allocation is not enough for the institutions to cover their operational costs.

State funding counts for just 40% of universities’ budgets, down from 49% in 2000. South Africa spends just 0.7% of its gross domestic product on higher education, said Cloete.

This is low, even when compared with the likes of Ghana and Senegal. But “instead of confronting government about that, what [universities] do is get the money out of student fees”, Cloete said.

Each year, the country’s universities increase student fees by double-digit percentages, outstripping general inflation. Statistics South Africa’s most recent consumer price index revealed that the cost of tertiary education rose by 9.3% in March 2015, compared with March 2014. This was 5.3 percentage points more than headline inflation of 4%.

University of the Witwatersrand students sparked the current wave of nationwide fee protests in resistance against a 10.5% tuition fee increase and a further 6% hike in registration costs. The university’s council wants to push the upfront fee payable to just under R10 000 next year, a figure protesters say will see many of them excluded.

Between 2000 and 2012, student fees across the country’s universities doubled from R7.8-billion to R15.5-billion – meaning that, “over 12 years, students had to find R7.7-billion more for the loss of government contribution”, said Cloete.

“The universities are not without blame; they should have been putting pressure on government to help sort out the student debt and to give them more money, as costs in universities increase.”

But Universities South Africa, an association of vice-chancellors, said it has made enough noise to the government about funding shortfalls. Spokesperson Mateboho Green gave the M&G a copy of its submission to the National Assembly’s portfolio committee on higher education and training last year.

The document decried the fact that higher education expenditure has been declining alarmingly in both real and student per capita terms, a trend that has “left institutions in increasingly worsening financial positions”. Said Green: “The views hold valid in 2015 still.”

The higher education and training department admits it is underfunding universities, but blames this on unfavourable economic conditions. Spokesperson Khaye Nkwanyana told the M&G the cash crunch that hit the government in 2008 continues to affect the national fiscus.

“As a result of that, the allocation that we get from treasury as a department to subsidise universities has not been growing over the past five years or so,” he said.

“The government is making a contribution, but it is not enough. That’s why even the calls for free education are not going to be realisable in the current financial environment.

“But we’re saying that universities also have a responsibility to raise money. Some of them are sitting on top of reserves. We want them to use those reserves to lower the cost of higher education.”

Students protesting at Wits also held this view that the institution has enough reserve funds to avoid fee increases. Student leader Vuyani Pambo told the M&G: “We know that the university is sitting pretty. There’s no need for them to raise fees.”

But the university’s chief financial officer, Linda Jarvis, said Wits “does not have any reserve operational funds”. Inadequate state subsidies had informed the university council’s decision to increase fees by 10.5%, said Jarvis. “In recent years, the government has not been able to provide inflation-linked increases in funding – and expenditure, which is not within our control, is escalating at rates higher than inflation.”

Money for food goes to fees

Sakhile Dlame (25)
First Year
Bachelor of Pharmacy
Part of Sakhile Dlame wants to join in the protesting Wits students – it feels like history is being made. Another part thinks about the exams he needs to study for as he might not have time over the weekend to study, because he also has to work and find a way to cover R47 967.26 in fees he still owes Wits for his first year.

After completing matric in 2013, Dlame worked for a year at Truworths as a floor consultant. His plan was to save money for varsity, but he didn’t count on having to support his two younger sisters, who were still in high school.

“I had to be the parent last year because my dad fell ill.”

He still works, and is paid R320 for two days, as he can only work on weekends. His salary does not make a dent in his varsity fees as it mostly goes towards his R1 600 rent for his Hillbrow flat.

“When I came to Wits I thought I would get NSFAS [National Students Financial Aid Scheme]. But they said that my application was dated to get funding in 2014, not 2015. I asked them if they couldn’t fix the date and they said it was too late for that.

“I feel heavily burdened because the only thing I paid towards for my studies was my registration fee in the beginning of the year and the money from my municipality at home in KwaZulu-Natal was only able to cover that amount for me to get in, at least.

“This is how I’ve been able to study for this long. I know I will pass but I’m not sure if Wits will release my results.” – Mosibudi Ratlebjane

Lindo Lubisi (19)
First Year
Bachelor of Pharmacy
“Our parents are struggling at home,” says Lindo Lubisi. “I am from Mpumalanga. My mother is a teacher and with that salary she takes care of me and my siblings. She also takes care of my aunt and her children.

“When they put these fee increments, they don’t think of us. We are already struggling. It means the money we would otherwise use for food has to go to fees.”

Lubisi says he supports the call by the Wits student leaders to join in the march in solidarity with the #FeesMustFall protest. He says there is no point in students coming to university only to struggle financially, to the extent that they lose their confidence.

Lubisi agrees with former Wits SRC president Mcebo Dlamini’s sentiments that, even if poor students work hard, get As and qualify for NFSAS aid, come January there will be no money, nothing. – Thuletho Zwane