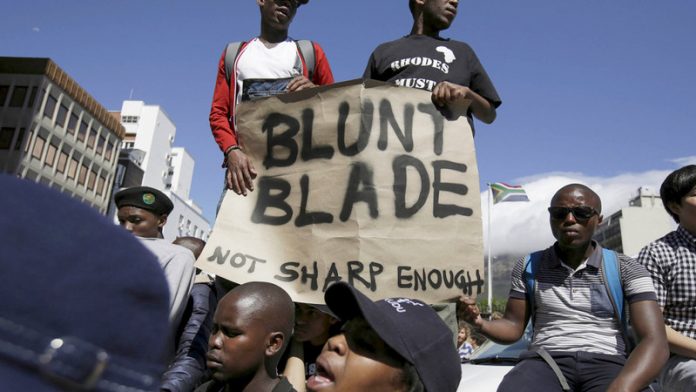 The Mail & Guardian can reveal that a government study – which Higher Education and Training Minister Blade Nzimande has been sitting with for three years – found that introduction of free university education for the poor in South Africa was feasible.

Nzimande has never released the study, despite public calls this year for him to do so. He received it in December 2012 from a working group he appointed in 2010. Chaired by Derrick Swartz, the vice-chancellor of the Nelson Mandela Metropolitan University, the team investigated the best model for free varsity education.

The government now says the unfavourable economic climate is tying its hands when it comes to introducing free tertiary education for the poor.

But Salim Vally, a University of Johannesburg associate professor who was in the working group, says he doesn’t understand why the report has not been released to the public.

“In the light of people currently looking for concrete solutions, it would add to the debate and discussion. It would assist people. The purpose [should be] to enable informed choices and possibilities,” said Vally.

“We took a long time [in the working group] to number-crunch and come up with a model that is realistic and feasible.”

He told the M&G about the recommendations that the working group handed to Nzimande in a draft three years ago. The team reached consensus that “free university education for the poor in South Africa is feasible”.

It would be implemented in a model similar to the National Student Financial Aid Scheme (NSFAS): applicants would have to prove they could not afford fees.

Not only would tuition be paid for, “but the full cost of study necessary for success at university, including registration and tuition fees, meals and accommodation, books and travel”, the working group further proposed to Nzimande.

Vally still maintains that free higher education for poor students is feasible and necessary. He says the definition of “poor” should be extended to include children of professionals such as nurses and police who currently do not qualify for NSFAS loans. The government could also introduce an education tax “on the very wealthy” to achieve free education, said Vally.

“Corporate taxation has not increased, you know. I’m not convinced that we don’t have money.

“It’s been done in other countries. It’s not that we’re inventing completely unrealistic or completely radical measures. These things are necessary if we’re serious about transforming our society.”

Khaye Nkwanyana, the higher education spokesperson, said when Nzimande received the report in 2012, he passed it on to the treasury for “costing, basically to say: ‘Can you fund this model?’

“Treasury officials, under Pravin Gordhan, did the costing and concluded it [was] too costly, [that] government can’t afford [it] and its implementation might mean government would have to compromise on social grants, on housing and other things. So we can’t [implement the report], and the best option is to continue expanding NSFAS in the mean- time,” he told the M&G.

“The government doesn’t have money that can fund free education at the moment. If Nzimande can get money today, he would implement free education tomorrow.”

Nkwanyana said he could actually release the report any time. “I want to release it so that we [address] all these [criticisms]. The moment they say I must release it, I’ll release it.”

The department released a report on university funding in 2013, based on the work of a committee led by Deputy President Cyril Ramaphosa.

The treasury did not deny that Nzimande had previously asked for increased student funding. Nzimande said in response to a parliamentary question earlier this year that he had requested enabling funding “in line with the recommendations of the departmental working group on fee-free education”.

“This pressure on the fiscus notwithstanding, government has over the years drastically increased its funding to NSFAS.”

Vally said because the working group had thoroughly probed a viable free education model, the study is better off released for public debate.

“It’s not up to treasury to say there’s no money. It should be a transparent process that we could debate.”

Protests that have hit the country’s public universities have gone beyond campaigning for institutions not to increase fees for 2016 to demanding free education.

Vuyani Pambo, one of the student leaders at the forefront of protests at the University of the Witwatersrand, criticised Nzimande for not implementing the 2012 report.