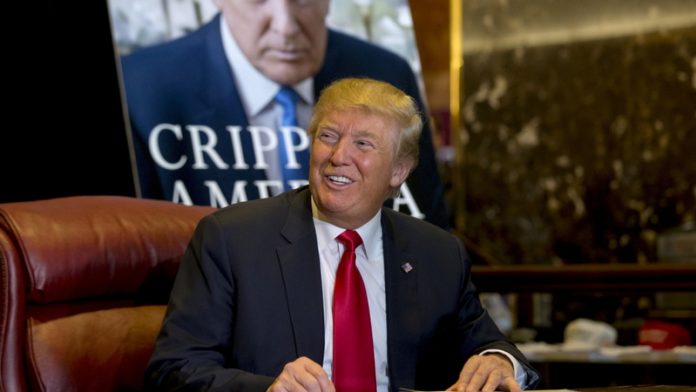 Love him or hate him, US entrepreneur and politician Donald Trump knows how to grab the public’s attention. According to NBC figures, Trump’s recent guest appearance on US comedy show Saturday Night Live on November 7 raised the show’s household rating to 6.6.

These ratings lifted the program to its top overnight household score in nearly four years, Variety reported. The last top ratings for the show were from an episode hosted by Charles Barkley with a guest appearance by singer Kelly Clarkson in 2012.

Trump’s episode had guest appearances by comedian and actor Larry Davis and singer Sia. But according to the New York Times,  SNL “chased ratings by casting the controversial candidate and stuck with obvious, anaemic political riffs and apolitical sketches that were cringe worthy all around”. Trump, who acted in some of the sketches, failed to bring enough humour to the show.

In October 2015 the National Hispanic Leadership Agenda (NHLA) expressed their disapproval of SNL’s choice to allow Trump to host the show because of his hateful speech that includes accusing Mexicans of bringing crime and drugs into the United States. SNL however, went ahead with their choice, which brought in the numbers but not the praises.

US singers and The Voice judges Gwen Stefani and Blake Shelton set tongues wagging after they were spotted in each other’s arms at singer Adam Levine’s recent Halloween party in California.

According to E!Online Stefani and Shelton were photographed for the first time as an official couple, showing PDA at a 2015 CMA Awards after party on November 4. For a while there had been speculations of the newly divorced singers being a couple but the lovebirds both kept mum on the rumours. Now Stefani, who filed for divorce from Gavin Rossdale in August 2015 after 13 years of marriage, has finally spoken out about her relationship with Shelton.  She recently spoke about her new relationship in an interview with Dallas/Fort Worth radio station 103.7 KVIL.

“He’s a pretty rad guy, I have to say that,” Stefani told radio hosts Leigh Ann and Courtney in the interview, Entertainment Tonight reported. Stefani, who has three sons with Rossdale, added that Shelton helped her through her divorce. When asked about announcing their relationship, she responded: “We didn’t! Like, somebody did. That’s what’s so crazy like, who announces that? Why would I do that?”

Less than a month after Stefani filed for her divorce, Shelton, who is a country singer, filed papers to end his four-year marriage to Miranda Lambert, a fellow country star, E!Online reported.

Stefani, who’s a pop star and Shelton, who’s a country singer, have been called an odd couple. But judging from their chemistry on singing show television show, The Voice, they just might work.

Television personality Lungile Radu married executive television producer and mother of his son Bobo Mokgoro over the weekend in Stellenbosch. Their guest list included actor Thapelo Mokoena, singer Nomsa Mazwai and Dj Dimplez, who was also one of Radu’s groomsmen.

Radu and Mokgoro opted for a fun-filled wedding that was nothing short of entertaining, with comedian and groomsman Thomas Gumede bringing humour to the wedding and dance routines to Beyonce’s hit song Party and TKZee’s classic song Mambotjie by the bridal party. Radu is best known for his role as Sbu on ETV soapie Rhythm City and for starring and producing the reality show, Forever Young.

Trevor Noah back on air after surgery

The Daily Show host and comedian Trevor Noah is back on air after recently undergoing an emergency appendectomy surgery. He returned to the show a day after surgery. Noah used the opportunity to share the experience he had in the emergency room and the shortcomings of the US health care.

“It was an interesting experience going to the emergency room. Although I don’t know if emergency room is the right term because they make you wait,” he said on the show. “I feel like there should be two rooms: a room for emergencies and a room for people who can fill out forms.”

He mentioned how the nurse wanted him to fill in some forms while he was in pain. Noah also poked fun at television host Jimmy Fallon’s injured hand after Fallon wished him a speedy recovery.

“Hey Jimmy. The hospital people said to tell you ‘wrong finger, come back’?” Noah tweeted. “Not sure what that means.”