Do our hopes lie with the private sector? 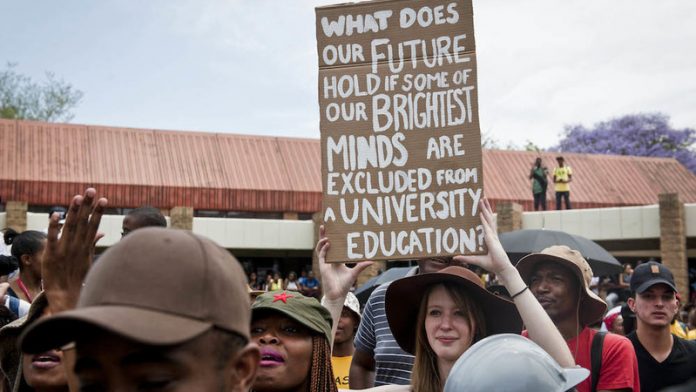 Globally, public higher education is in the throes of a crisis. The demand for places in these institutions will have expanded from 97-million students in 2000 to more than 262-million by 2025.

The South African situation is no exception. Although the budget for overall education in South Africa has progressively improved, the critical challenges of equality and access have lagged.

Since 1994, the question of access to tertiary education has become ensconced in the lives of thousands of young hopefuls. We hear of the multitude of matriculants who are denied access to our universities and the mismatch between demand and supply for places in these institutions – a situation the National Development Plan acknowledges.

Evidence suggests our universities are bursting at their seams, and that school-leavers have a one-in-eight chance of studying further at one of them. Through the media we become witnesses to heart-wrenching stories of people who cannot study because there is no place or funding to educate their aspiring minds – a tragedy, especially when one realises the importance of skills required in the development of the country.

The recent fees must fall student protests add further testimony to this sad dilemma. Although the state has agreed not to increase fees for 2016, this will not address the problem of the university aspirants.

The problems of access and affordability will instead be compounded and the backlog will build up, leading the country from crisis to crisis – the new normal.

Government officials continue punting the same response: “If you are not successful at university entry, then try technical and vocational education and training colleges.”

In contrast to this dismal news, Maurits van Rooijen, the rector of the London School of Business and Finance, says changes in the higher education sector introduced by the British government in 2011 have had some profound effects on the question of access.

In particular, he asserts that “educating students at a university level is not exclusively the public sector’s role; private provision can make an equally positive contribution”.

Quoting from the National Audit Office Report of 2014, Van Rooijen further argues that, “when private colleges give mature students from disadvantaged backgrounds the opportunity to return to education, a completion rate of over 80% is surely a positive outcome”.

“This stands in comparison with other publicly funded London institutions where the non-continuation rate in similar courses can be up to 24.5%.”

In an article titled Higher Education: Learn from Brazil and Let the Private Sector Play its Part, Ann Bernstein of the Centre for Development and Enterprise expresses similar sentiments. She states that, despite the government’s major spending on upgrading of higher education institutions, the demand for university places will outstrip the supply.

She believes South Africa can learn from other emerging economies that have expanded access to higher education by creating public-private partnerships. In particular, she quotes the case of Brazil. Bernstein says that after the Brazilian government improved its regulatory environment the private sector helped increase access and students’ success.

Evidence from other emerging economies further suggests that there is much to gain and little to fear from making the tertiary education environment accessible to private providers.

Even the World Bank has made comparable observations about the dilemmas of public higher education in emerging economies and suggests that the sector needs to reinvent itself. It has recommended that the public sector should not only continue its role as a provider of tertiary studies but also make access an important priority of its higher education agenda.

The concept of public-private partnerships, the bank further contends, recognises the existence of alternative options in the provision of tertiary education.

The dilemmas of higher education are not unique to South Africa. Governments throughout the world are increasingly admitting that they simply cannot provide it on their own, and they are progressively looking at the private sector to help solve or alleviate the problem.

More importantly, the conceptual model of a public-private partnership recognises the existence of an alternative option for providing higher education services.

Public-private partnership models are underpinned by an agreement according to which the private sector delivers a specified educational service of a predetermined quantity and quality at an agreed price for a specific time period. Furthermore, these contracts contain rewards for good service and sanctions for non-performance, and include conditions that make the private sector share the financial risk in the delivery of educational services.

The time is now ripe for a new nexus of relationships to emerge to tackle the dramatic expansion of students demanding access to higher education in South Africa.

The crisis of the mismatch between demand and supply requires a new approach to our critical understanding of the complexity of the question of access in this country. It should persuade us to explore new and innovative solutions to address the problem and, in this respect, public-private partnerships in higher education become crucial.

We would like to recommend that South Africa invokes the principal of a social contract in the constructs of a development state. The success of this compact will depend on the active involvement of all stakeholders – a strong emphasis on building a broad front and partnership between the government, the private sector and civil society.

The opportunity to partner with established private providers is a progressive win-win solution – an alternative to the state’s proposal to burden the taxpayer with a new wealth tax. If anything, including private providers is a way towards inclusive growth that could contribute to stimulating the economy rather than stunting it. Collectively, we can resolve the crisis of access to higher education in this country.

Global verification confirms that the responsibility of providing higher education is too large and complex for any government to do adequately. It is important for governments, especially in emerging economies, to explore innovative ways of financing and providing education services that would widen the scope for access to higher education.

The time has come to confront an inconvenient truth. We need to traverse new terrains boldly and establish public-private partnerships to provide access to higher education. It may prove to be the most plausible resolution to an incommodious problem.

We sincerely hope that our thesis will engender debate about the question of public-private partnerships in higher education and the role they could play in successfully addressing the issues of access, equality and finance. We owe it to the future.

Anis Karodia is a senior faculty member and researcher at the Regent Business School and Ahmed Shaikh is the managing director and a senior academic; Paresh Soni is the manager for institutional research at the Management College of South Africa and Zaheer Hamid is the director of the college’s graduate school of business

Universities to be made more affordable