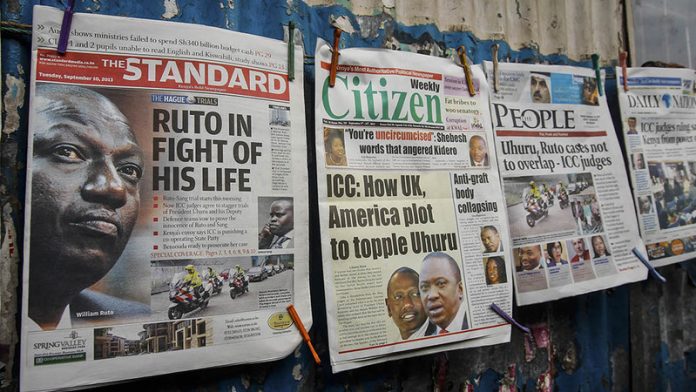 This week, 123 countries that have signed up to the International Criminal Court (ICC) started their annual meeting in The Hague in the Netherlands amid concerns of waning support for international justice from some African states.

Tensions are particularly high, with the governments of Kenya and South Africa threatening to withdraw from the ICC’s Statute and pursuing ­initiatives that threaten the independence of the court.

Despite widespread impunity for crimes committed during the 2007-2008 post-election violence, the ­government of Kenya is pursuing political efforts to interfere in, and stop, the trial of its deputy president, William Ruto.

South Africa seeks to politically overrule an ICC decision that it should have arrested Sudanese President Omar al-Bashir during his trip to the country earlier this year.

South Africa and Kenya are not alone in seeking to politicise the work of the ICC. Some members of the United Nations Security Council are more intent on advancing their own interests than supporting the court as an effective tool to ensure ­justice. Russia notably vetoed a ­resolution referring the situation in Syria to the ICC.

But they are not the only ones blocking access to justice for victims. Only two weeks ago, New Zealand circulated a draft resolution at the Security Council seeking to rule out access to the court for Israeli and Palestinian victims.

In addition, the UN general assembly refuses to provide the court with sufficient resources to keep pace with the large number of emerging cases it should deal with. This could potentially force the ICC to make difficult choices on where it seeks to deliver justice.

Somehow, in spite of these serious political challenges, a way must be found to strengthen and not weaken the ICC. As the only credible avenue of justice for so many victims in many different countries, it is simply too important to fail.

From the outset, when the ICC was established 13 years ago, it was clear that challenging the entrenched global culture of impunity and reluctance to prosecute powerful figures would never be easy.

At the time, South Africa commented wisely that “it is our actions and not just commitments that will earn us the privilege to be associated with the establishment of this court”.

Impunity exists because, more often than not, the crimes are committed under the direction of those in power against the vulnerable and the marginalised in society.

Victims’ lack of political power means that, having failed to protect them, governments often ignore their demands for justice, truth and reparation in order to protect those in power and their interests.

During the 2014 conflict in Gaza, for example, residential homes were targeted by Israeli forces and rocket attacks by Hamas. Neither side to this conflict has been willing or able to investigate the crimes and prosecute suspected perpetrators, leaving the ICC as the only possible avenue for the victims of these crimes to obtain justice.

The court has the potential to play an important role in ending such injustice. With its mandate to step in when national authorities refuse or are unable to act, the ICC can prosecute a few key cases and deliver some measure of justice to victims and thus press national authorities to fulfil their responsibilities.

In its first case, the ICC listened directly to the stories of child soldiers who had been abused and forced to commit terrible acts. Having convicted Thomas Lubanga from the Democratic Republic of Congo and sent a strong message to recruiters of child soldiers around the world, the court is now developing a reparation order to help the victims.

More than 10?000 victims have engaged in the ICC’s proceedings so far and victims in many other countries are now looking to the court to ensure that they receive justice.

Of course, it must be recognised that the ICC is not a perfect institution. It has failed to ensure access to justice for victims in many situations outside Africa and to fully respect the rights of the accused, victims and witnesses in some cases. Its decision that Abdullah al-Senussi could be tried in Libya despite serious human rights concerns is troubling.

However, these weaknesses highlight the need for constructive engagement rather than attacks.

In light of the ever-increasing number of crimes being committed around the world, it is essential that all governments, including those of Kenya and South Africa, remain strongly engaged in supporting international justice.

The capacity of the ICC must be increased so that it can respond to crimes wherever they are committed and efforts that threaten the independence of the court, or its ability to deliver justice for victims, must

Impunity is a global epidemic. We need the ICC and the support of all the world’s states to combat it.