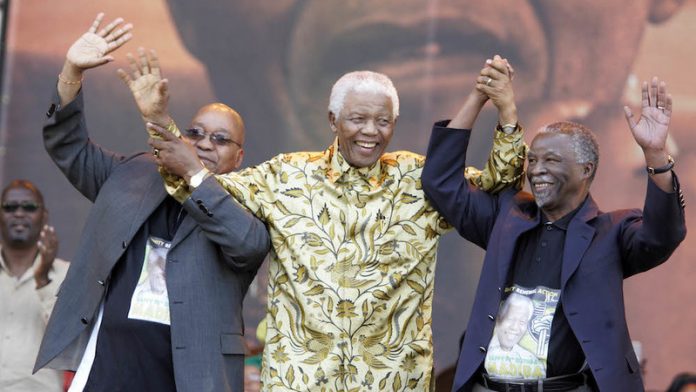 As a young, so-called born-free black person living in South Africa, it breaks my heart to see how the once glorious ANC has degenerated into what it is today, beset with scandals and mediocre government officials.

With local elections taking place this year, 2016 will certainly be a game-changer in South African politics and a year in which the ANC will have to do a lot of soul searching if it wants to remain in power.

This year, all eyes are on the ANC, with the #FeesMustFall movement seeking to continue with protests, the #ZumaMustFall movement seeking to break more ground and opposition parties pushing for more accountability as well exposing the shortcomings of the governing party. The succession debate as to who will take over from President Jacob Zuma will also be a focus point but, overall, the ANC will have to use this year to regain the trust of many South Africans.

The former liberation movement, like many others, has reached a point at which it sees itself as being bigger than the country. It’s now time for it to decide whether its loyalty lies with the people of South Africa, the head of state and his cronies, or with white capital.

Like most liberation movements, the ANC has to understand that it is not guaranteed a permanent position and that it will have to undergo a major generational mix, a change of culture in the organisation and, fundamentally, a major reform in its politics and ideology.

Who could ever have thought that the beloved ANC could one day find itself in such a crisis, with people showing their grievances all over the country and on social media. It’s now do or die for the ANC.

South Africans are beginning to see the light and are starting to realise that they have been sold a very expensive wet dream and, once they collectively wake up as a country, all hell will break loose.

Although the ANC-led governments of former presidents Nelson Mandela and Thabo Mbeki had their own problems, they were certainly far better than this ANC led by Zuma.

The ANC Youth League, which is supposed to be the brain behind the mother body, is totally dysfunctional, the ANC Women’s League is dead, the Umkhonto weSizwe Military Veterans’ Association is irrelevant and the ANC’s alliance partners are confused.

If the ANC does not robustly engage in serious introspection, it will become irrelevant and lose the hearts and votes of many South Africans. – Modibe Modiba

Zuma gets away with corruption because of apartheid

South Africans are, generally speaking, not a submissive people – in many cases, we are the very opposite.

Why is it then that we are passive and quiet in the face of the corrupt abuse of our country by President Jacob Zuma and his government?

Zuma blames the legacy of apartheid at every turn for his government’s failures (mostly caused by corruption and delinquency). One thing, I believe, he can justifiably blame the old regime for, is a submissive acceptance of profound evil. In the days of grand apartheid, black people feared authority for good reason – dissent was met with instant retribution. White people well knew that if they “stood up to be counted” in their rejection of the brutal regime, they would be taken out.

Attitudes that became ingrained in our national psyche during the apartheid era explain the public’s passivity and acquiescence in the face of the current government’s corrupt practices and shockingly poor levels of governance. The public’s attitude is clearly a hangover from the time when the Security Police and Bureau for State Security ruthlessly punished and/or “eliminated” those they regarded as inimical to their cause.

It is indeed ironic that attitudes stemming from the dark days of apartheid allow Zuma and his coterie to continue with their selfish destruction of the economic fabric of our nation. – Sandy Johnston

Aaron Motsoaledi, as minister of health, you are in a unique position in the Cabinet: you preside over a portfolio that is not completely broken, mismanaged and corrupt. Therefore, you have an ideal opportunity to engage in some lateral thinking.

The private health sector is as good as it gets – a beacon in a litany of horror stories. So, why break something that is working? It would surely make more sense to strive to achieve its standards of excellence in the state sector.

This can be done, I suspect, to a great extent with the budget currently at your disposal. All that you have to do is transcend the rot that pervades the administration of most government departments.

This leads to another facet of the equation that must have crossed your mind: finances. South Africa has a population of about 51-million people. Of these, 3.3-million pay 99% of the tax revenue and 2.3-million pay 93% of it. To ask them to pay more and to filch their contributions to the commendable (and cleanly audited) medical aid schemes is nefarious.

Financially, the proposal is untenable, and I suspect that when you discuss it with Finance Minister Pravin Gordhan he will find it hard to suppress his incredulity.

Should you decide to not let sanity prevail, then discard any illusion that you might have of inheriting functioning and well-equipped private hospitals.

If the shareholders and stakeholders believe that the National Health Insurance scheme will put them out of business, then there will be no more sustaining, maintaining and renewing of equipment and facilities. Hospitals will be converted into hotels, gyms and casinos. Medical professionals will pack for Perth, and South Africa will have a health sector with which you will not want to be associated. – James Hunt

This can be done by making the project’s 30% of the budget for local broad-based black economic empowerment a separate budget to break the feedback loop that greases the wheels of patronage.
Read more
Coronavirus