It’s only 32km to the state clinic, but for the poor that’s a world away

Sarah Mthimunye, 75, shuffles slowly on two swollen feet. She uses a green plastic chair for support as she climbs step by step down the stairs from her kitchen door. Several metres from the house, her daughter and husband sit under the shade of the lean-to in front of a corrugated iron shack.

She puts the chair down and takes a seat in front of her husband Aaron. Mthimunye can’t remember her husband’s age, but he looks older than she does. He is hard of hearing and smiles blindly into the sweltering heat of the midday sun. “Umkhulu [the old man] is very sick,” Mthimunye explains. Her husband is shakily leaning on the cane in his hands. He feebly moves his chair out of the encroaching glare of the sun, deeper into the refuge of the shade.

The Mthimunye’s home is a few houses from the main road that runs through the small settlement of Charl Cilliers in Mpumalanga’s Gert Sibande district. Here, Mthimunye lives with her ailing husband, her daughters and grandchildren.

Charl Cilliers is 32km north of Standerton. It is surrounded by farms and has no hospital or clinic. A mobile clinic visits once a month for two days. Mthimunye collects her diabetes and hypertension medication from here. But when her husband fell ill two years ago, she couldn’t risk waiting for another month for the mobile clinic to return. “He was sick for a long time and we went to many different doctors but none of them could tell us what was wrong. Eventually I took him to this doctor who diagnosed him with diabetes and gave us a prescription to take to the clinic.”

Mthimunye points towards a small white building down the road from her home. It’s the rooms of a private doctor who charges for his services – something many residents in this community simply cannot afford. 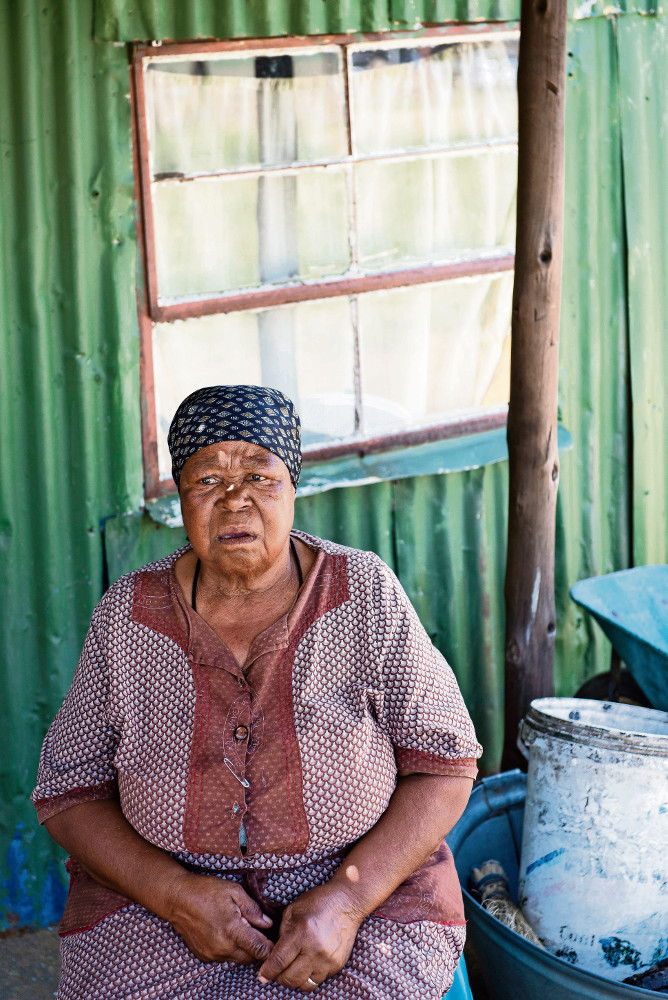 Luxury
About a kilometre from the Mthimunye home, Sonto Masombuka* sits at the table in her kitchen watching television.

“The clinic parks right there,” she says, pointing out of her window at a big tree in the yard next door.

Although the doctor’s office is a few houses from her home, using his services is not an option for her. “I can’t spend the little money we have on a doctor, no matter how low his price is. So when my child is sick in the middle of the month we have to hitchhike to get to Standerton or Embalenhle [18km away],” explains Masombuka.

Charl Cilliers has no public transport so residents mostly hike. Those who can afford it hire a car to get to neighbouring towns for healthcare or to buy groceries.

Masombuka adds: “A lot of people in this area who do attend a clinic go to Standerton because the nurses in Embalenhle turn us back. They tell us to wait for the mobile clinic to come here. Those who have money just go to the doctor.”

“I opened this medical practice by default at Charl Cilliers in November last year,” Sithole explains.

He first came across Charl Cilliers while driving from Secunda to Standerton and noticed that there was no doctor in the area, let alone a clinic in the village. The building he now works in was dilapidated when he arrived. But it wasn’t until his practice was up and running that he realised just how desperately people needed a doctor.

Sithole says the patients in Charl Cilliers present with the same conditions, such as HIV and diabetes, as other patients he has seen while working in a government facility in Emalahleni (Witbank). But because most of the residents in Charl Cilliers are unemployed, they tend to present late or in the advanced stages of their illness “because they stay home hoping to get better. So this does create more of a challenge.”

Sithole says the biggest problem of working in an area that is so isolated is a lack of a support system. “As a doctor you can only do so much, but some conditions need further investigation like blood tests or X-rays. Because there’s no clinic and the transport system is poor, this creates a major barrier for the patient to get access to such services.

“There is a mobile clinic that comes monthly, but patients say it’s not sufficiently equipped for their needs. For example, it experiences shortage of medicines and some months it doesn’t come.” 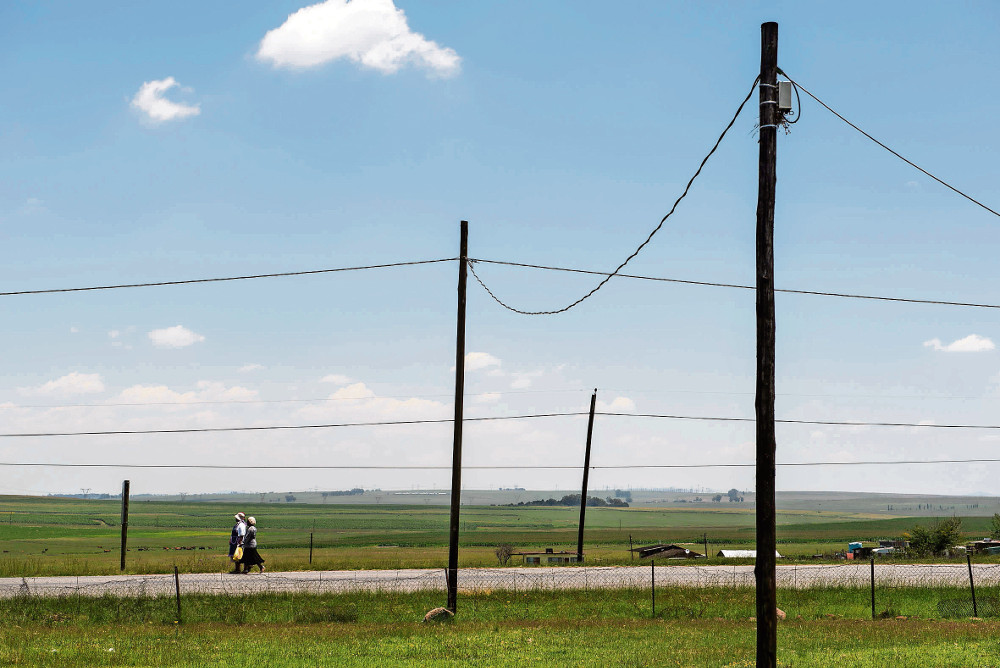 With no public transport in sight, Charl Cilliers residents have to hitchhike to get to a clinic

No healthcare
Access to healthcare in the Gert Sibande district is a serious problem, according to the Treatment Action Campaign. The group’s chairperson in Mpumalanga, Belinda Setshogelo, says that even condoms aren’t widely available because the clinics are so far away. “Young people have to spend money to catch a taxi just to go and get free condoms.”

The 2015 District Health Barometer lists HIV infection as one of the leading causes of death in the district, and Mpumalanga is one of two provinces where the rate of teenage pregnancy did not decrease in 2014-2015.

A 2012 national health department survey of pregnant women attending government clinics for the first time found that “the only two districts out of the 52 that have recorded HIV prevalence rates of more than 40% in South Africa are uMgungundlovu (40.7%) in KwaZulu-Natal and Gert Sibande (40.5%)”.

Both these districts are National Health Insurance (NHI) pilot districts. 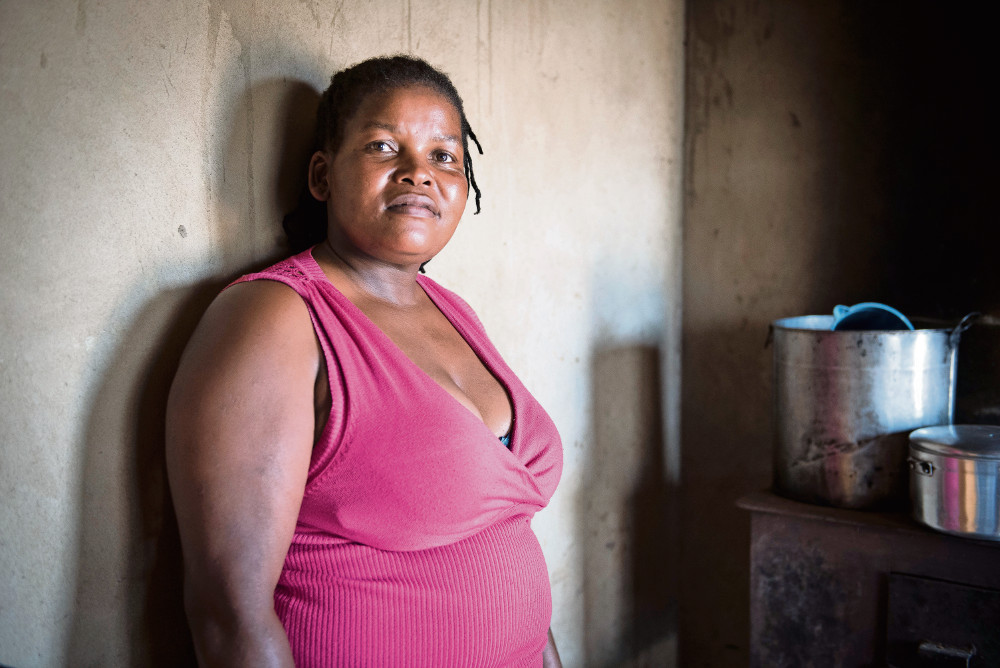 In eMahlabathini, a village about 10km from the Oshoek-Swaziland border, a little boy squeals as his friend roars after him. Nomvula Ngwenya laughs as she tries to stop them from running in the room.

“If I find someone who is very ill, I will bathe them, change their diapers, feed and give them their medication. I do this three times a day,” she says.

Ngwenya’s sitting in her neighbour’s one-room house along with some of the patients she takes care of. She is a home-based care-worker with a local organisation and has seen first-hand the struggles people in remote towns and villages have with access to care.

“The closest clinic is in Amsterdam [10km from the village]. It costs R10 to go there, but a lot of my patients cannot afford that. I often use my own money to go to Amsterdam to collect their medication.”

Ngwenya, who lives with her husband and three-year-old son, earns only R1 000 a month.

“Some of my patients are young people who are suffering from these common diseases. Some have tuberculosis, others have HIV. They delay initiating treatment and many end up dying, because they only start antiretroviral [ARV] medication when they are terminally ill.”

According to the District Health Barometer, HIV accounts for 40.7% of deaths of women between the ages of 15 and 24 in Gert Sibande district. The comparative figure for males is about 16%.

“There is a mobile clinic that comes once a month, but it doesn’t have ARVs. Most of its service is based on immunisation for the children. Those on ARVs have to go to Amsterdam,” Ngwenya explains.

Cost of care
Zodwa Zulu*, 24, lives with her mother and son. She is one of the residents who cannot afford the R10 transport costs to the clinic. She borrows money every time she has to fetch her four-year-old son’s medicine from the clinic.

“My child is on antiretroviral treatment, but sometimes I don’t have money to go to town to fetch the medication,” she says, looking over her shoulder at the boys.

Zulu and her son don’t have identity documents, so she cannot find a job or even apply for a government childcare grant. “We live with my mom and she does everything for my son, because his father wants nothing to do with him.”

Khanyisile Khumalo and her five-year-old child are both HIV positive. “I don’t work. I rely on this lady,” she says, pointing at Ngwenya. “She fetches treatment for me and my child from the clinic. I only go to the clinic when they tell her that we have to be there. Then she has to try and give me money to go.”

Khumalo fights back the tears.

“Aunty [Ngwenya] even shares her food with me and my daughter,” she says softly. “I also don’t have an ID and my child doesn’t have a birth certificate. But Aunty is working very hard to solve my problems.”