Disputing the book as the almighty source of knowledge 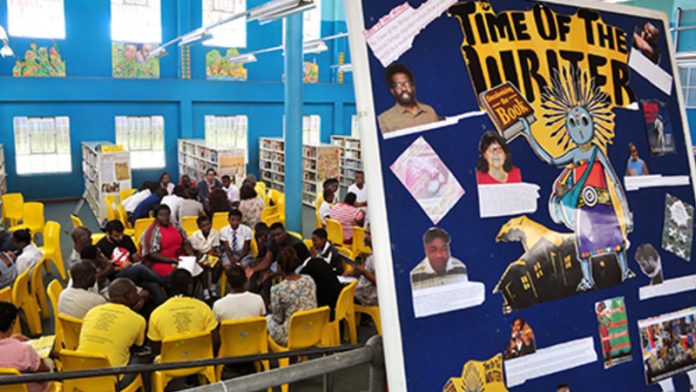 If you had come to Time of the Writer session ‘The Book and Knowledge Production’ (held at KwaMashu Library) and expected panelists with folded arms and unassailable wisdom, you may have left disappointed. But if you had come seeking a disruption of this format, you would have glimpsed the first, blurry visages of what the act of decolonising the book looks like.

The first day-time panel of Time of the Writer in Durban presented all the discomforts one might expect when people attempt to chart a path into the unknown. Writers such as Nakanjani Sibiya, TO Molefe, Percy Zvomuya, Niq Mhlongo, Azad Essa, Monica Seeber and moderator Zukiswa Wanner interacted with learners from schools such as Zeph Dlomo Secondary, Zakhe High School, KweSethu High School and Dr John Langalibalele Dube High School.

From the start, evidence of how ground breaking this format could be were in evidence. There was the Shona-speaking Panashe Chigumadzi, reading her introduction in isiZulu from a script that had possibly been handed to her by Niq Mhlongo, who was seated besides her. Percy Zvomuya did the same, attempting isiZulu via its proximity to isiNdebele (he also speaks Shona) until it became untenable. This exercise suggested that language will no longer be taken for granted. Language is often the elephant in the room when writers who write in English speak to people of various mother tongues who may or may not be readers of these authors’ books.

The format for the session involved eight participating writers being split into four groups, from where discussions around the ownership of and access to knowledge took place.

“For me this is my first book festival so it feels like this is how it should always be,” said Panashe Chigumadzi, author of Sweet Medicine. “The importance is lost on me like a child who goes to a model C school not knowing what her parents’ generation went through for her to have that. The foregrounding of language is important but for me (this being my first festival) this feels banal and ordinary that it is strange that that is not the standard.”

As host Pam Dlungwana described the format, and how the crowd was solicited, it was in the form of isicoco, an isiZulu term that describes circular headgear worn by men of a certain social standing. The headgear could also denote honourary status conferred on a male for attaining specific knowledge. How these men would actually attain that knowledge, Dlungwana says, was by inviting people who were keen to know what they knew. In this way, they themselves got to learn more about the subject they were experts in. In short, the attempt here was to subvert the hierarchies of dispensing knowledge.

While there was a clear degree of mobilisation, there was still a degree of reliance of school children as the audiences for the day sessions. From observing some of the interactions, there is a hint that teachers are perhaps not doing enough to promote the culture of reading for leisure at schools and thus, the impact of events such as this on schoolchildren cannot be underestimated.

Senzo Ngema, a grade eleven pupil at KweSethu High School, said while he read for academic purposes at school, he read novels at home because he had inherited his sisters’ books. Asked for his final thoughts, he quipped: “People out here generally read to study, but if you dig deeper you will realise from reading the right books that we should fight for our culture because whites have conquered it.”

The writer’s accommodation and travel costs were covered by the Centre for Creative Arts.