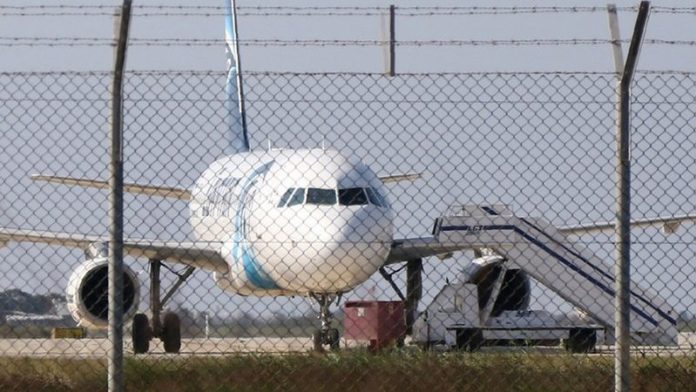 A Cyprus government official has confirmed that the hijacker who had seized an EgyptAir plane on Tuesday and diverted it to to Larnaca airport in Cyprus had demanded to see his estranged Cypriot wife.

Meanwhile, Cyprus president Nicos Anastasiades said that the EgyptAir hijacking was “not terrorism-related”.

At least five more people have been released from the hijacked plane. The five, wearing what appeared to be crew uniforms, could be seen descending from the aircraft.

The hijacker seized the airliner on Tuesday and diverted it to Cyprus, before releasing all the passengers except four foreigners and the crew, officials and the airline said.

The man, who is not Egyptian, asked for a translator to press his demand, it added, without providing further details.

Egyptian civil aviation said the hijacker had threatened to detonate an explosives belt on the EgyptAir flight which was diverted to Cyprus’s southern coastal city of Larnaca.

EgyptAir said on Twitter that “negotiations with the hijacker” had resulted in “the release of all the passengers, except the crew and four foreigners.”

Negotiations with the Hijacker result in the release of all the passengers, except the crew and four foreigners.

The identities of the foreigners was not immediately clear.

Cyprus police said the hijacker had contacted the control tower earlier in the day and the plane was given permission to land.

A crisis team was deployed to the airport, the main entry point for tourists to the Mediterranean resort island.

The plane was parked on the tarmac away from the new terminal building but just 200 metres from a beach where dozens of foreign tourists were out.

The aircraft was cordoned off by armed police.

The airport was closed during the crisis with incoming flights diverted to Paphos on the island’s western edge.

The EgyptAir plane was headed from the Mediterranean coastal city of Alexandria to Cairo with 81 passengers on board when it was seized, Egyptian civil aviation said.

The airline tweeted: “Our Flight MS181 is officially hijacked.”

The Cyprus foreign ministry confirmed in a statement that the flight “was hijacked and diverted to Larnaca international airport”.

It said “crisis management plans” had been put in place and that the country’s National Crisis Centre had been in contact with Egyptian authorities.

The incident came after a Russian airliner was downed on October 31 over the Sinai Peninsula, killing all 224 people on board. The Islamic State group claimed to have smuggled a bomb on board the plane.

Larnaca is no stranger to hostage crises. Several hijacked planes were diverted to the airport in the 1970s and 1980s.

In 1988, a Kuwait Airways flight hijacked en route from Bangkok to Kuwait was diverted to Mashhad and later to Larnaca, where hijackers killed two Kuwaiti passengers and dumped their bodies on the tarmac.

In February 1978, an Egyptian commando unit stormed a hijacked Cyprus Airways DC-8 at Larnaca airport, where 15 passengers were being held hostage. Some 15 Egyptian soldiers were killed and 15 wounded. All the hostages were freed and the hijackers arrested. – AFP