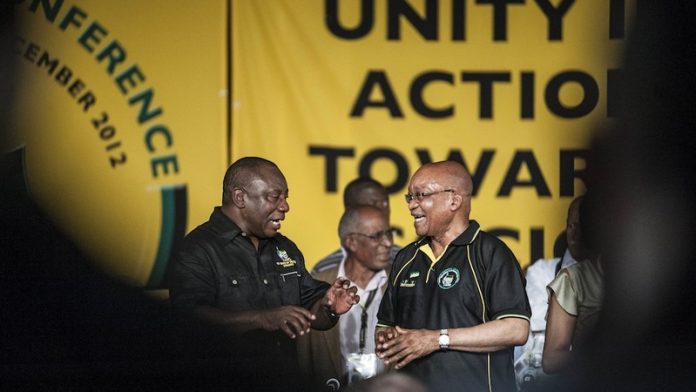 Call him a “yellow communist”, as Julius Malema and others have done, or the man who turned the South African Communist Party into a conveyor belt for the ANC. But you have to give credit to Blade Nzimande, the SACP boss and minister of higher education and training, for his ability to coin powerful phrases that have been used in the proxy leadership battles at successive ANC elective conferences.

It was Nzimande who launched a spirited campaign against what he and other communist leaders termed “the 1996 class project”, an attack on the neoliberal policies of the ANC government under former president Thabo Mbeki. He helped convince ANC members to vote Mbeki out of the ANC presidency in 2007 so that the party could pursue pro-poor and pro-worker policies neglected by Mbeki. Yet most of the radical resolutions adopted at the party’s 2007 elective conference were never implemented. Only those that benefited Jacob Zuma, the ANC’s new president, were put into action, such as the closure of the Scorpions, the crime- busting agency, for instance.

In 2012, Nzimande coined a new term – “tenderpreneurs” – to delegitimise an ANC faction led by the then leader of the youth league, Malema, among others, which supported former deputy president Kgalema Motlanthe’s campaign to replace Zuma as ANC president.

“Tenderpreneurs” refers to ANC cadres and government officials who abuse their political power and influence to secure government tenders. At the time, Malema (now leader of the Economic Freedom Fighters) was facing corruption allegations, which were later dropped

Now, with only months to go until the ANC’s 2017 elective conference, Nzimande and other tripartite alliance leaders, including ANC secretary general Gwede Mantashe and Deputy President Cyril Ramaphosa, have launched a new campaign against what is called “corporate capture of the state”. This is mainly targeted at Zuma’s family friends, the Guptas, who are accused of influencing key Cabinet appointments and links to multimillion-rand government tenders.

The campaign against state capture should be welcomed, but it would be naive not to see it as a proxy for the leadership battle taking place between ANC factions. Top ANC leaders are pulling in different directions as the search to find Zuma’s successor gains momentum.

Officially, the process to nominate candidates to succeed the current leadership has not started, but recent events suggest otherwise. Contradictory messages from Zuma and Ramaphosa over the past

week on the issue of state capture and the influence of the Guptas, shows up cracks in the ANC leadership bloc.

Zuma publicly defended the Guptas; Ramaphosa spoke out strongly against them and state capture in general. Addressing the ANC’s professional and academic volunteers’s summit in Sandton last week, he said to loud applause: “The ANC is not for sale. And what we will also say is that the ANC refuses to be captured. Those who want to capture the ANC and make it their own and influence it to advance personal or corporate interest, you have come to the wrong address. Try next door.”

Ramaphosa’s remarks were seen by his supporters as a departure from his hitherto uncritical approach towards Zuma, and an indication that he was ready to stand as a candidate to succeed him in 2017. Ramaphosa’s supporters came out of the ANC’s national executive committee meeting last week more confident that the former trade unionist was slowly winning support from some NEC members previously known to be loyal to Zuma.

They pointed to a number of issues demonstrating that the Zuma faction was no longer in total control of the NEC, including the committee’s rejection of the proposal to remove KwaZulu-Natal Premier Senzo Mchunu from his position and replace him with the province’s ANC chairperson, Sihle Zikalala, who is seen as a Zuma supporter.

The NEC also decided to allow ANC regional executive committees to select mayoral candidates for the big metros. Zuma supporters such as Nomvula Mokonyane, the

water affairs minister, wanted the NEC to second some of its members to take over as mayors in some of the big metros that are under

Ramaphosa’s supporters were also happy that the NEC mandated Mantashe to deal with the Gupta issue. Damaging revelations by the deputy finance minister, Mcebisi Jonas, and former ANC MP Vytjie Mentor, to the effect that they were offered ministerial positions by the Gupta family, and former government spin doctor Themba Maseko’s claim that Zuma instructed him to meet the Gupta family to discuss business opportunities, have raised the stakes.

The Ramaphosa faction will surely use the allegations against the Guptas to win support from the public and ANC branches. But the Zuma faction, which is in control of the Free State, North West, Mpumalanga, KwaZulu-Natal, and the party’s youth and women’s leagues, is expected to put up a spirited fight to ensure that its preferred candidate emerges victorious in the 2017 electoral stakes.

Matuma Letsoalo is the political ­editor of the Mail & Guardian

High stakes: Cyril Ramaphosa (left) has publicly lashed out at the Gupta family, saying ‘the ANC is not for sale’. His remarks put him on a collision course with President Jacob Zuma (right). Photo: Madelene Cronjé