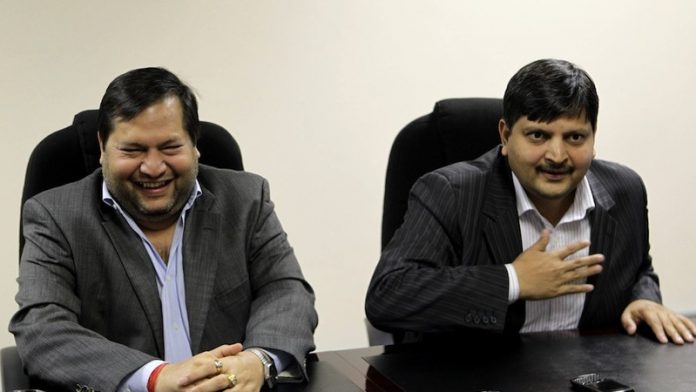 The Gupta family have announced that they will be resigning from all executive and non-executive positions held in Oakbay Investments, while Duduzane Zuma, the president’s son, will exit all his positions held the Oakbay group.

The announcement was made on Friday afternoon in two separate statements from the company.

Oakbay Investments is the holding company for the family’s business interests in South Africa, which include the listed mining company Oakbay Resources and Energy, Sahara Computers and media firms The New Age newspaper and broadcast ANN7.

The news came after a series of large financial services firms ditched the Gupta family and the Oakbay group of companies – the latest being First National Bank, which announced on Wednesday that it had given notice to close the accounts of all entities associated with Oakbay Investments.

“It is with deep regret and a heavy heart, that following a period of sustained political attack on our family and our businesses, we took the decision yesterday to resign all executive and non-executive positions held in Oakbay Investments, by Gupta family members,” the statement said.

“Oakbay’s executive committee and the CEOs of each of the businesses will continue to oversee the management and running of the business and all portfolio companies going forward.”

The family said it hoped that by stepping down from these positions it would help save “tens of thousands” of jobs.

In a separate statement issued through Oakbay, Duduzane Zuma said he would be relinquishing all positions held at Oakbay companies and would be “exiting investments to preserve the jobs of Oakbay’s thousands of employees and to de-politicise my participation in business.”

The close relationship between the Zuma family and the Gupta’s had in recent months been in spotlight leading to accusations of “state capture”.

Prior to FNB’s announcement this week, Oakbay’s auditors KPMG, as well as its JSE sponsor Sasfin have in recently terminated their services to Oakbay companies.

These events have followed allegations that Gupta family members offered deputy finance minister Mcebisi Jonas, the role of finance minister before Nhlanhla Nene was axed from the post in December last year.

In an apparent Oakbay Investments memo to employees – apparently leaked on social media by TimesLive – the company said that the closure of its bank accounts had made it “virtually impossible to continue to do business in South Africa”. As a result, it said that this may make the company unable to pay staff.

Oakbay said it was in talks with the ministries of finance, labour, mineral resources and the office of the president to “express deep disappointment over the decisions of our banking partners and to make it very clear that livelihoods are at risk if we are unable to restore these important banking relationships”.

The family have consistently denied the allegations against them and argued that the steady isolation of their business interest is due to a political campaign against them.

“We find it totally unacceptable that several thousand direct employees and tens of thousands of their dependents will have to suffer as a result of the campaign against Oakbay and the Gupta family,” the family said on Friday.

In his announcement Duduzane Zuma said that the economy was skewed against black people, forming the basis of the struggle for political and economic emancipation.

Nevertheless, Zuma said despite his efforts to “participate meaningfully in the economy, aspersions were cast on me and my family.”