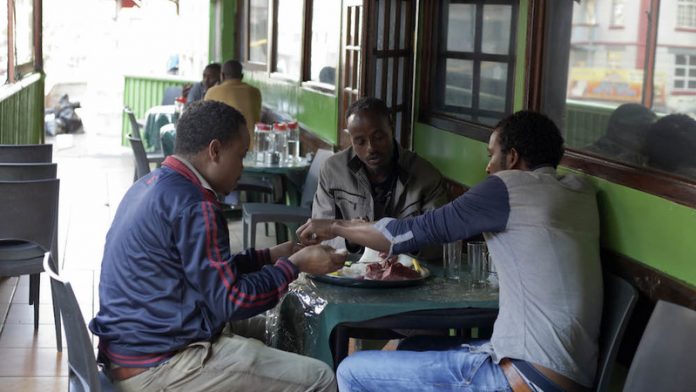 Late afternoon on a Saturday and Johannesburg’s Jeppe Street is throbbing. Teeming with hawkers and commuters, hustlers and pickpockets, immigrants and locals; people either rushing earnestly to somewhere, or moving with nowhere to be.

Propped up against a shop wall, a bellicose man sits chewing chaat, the herb popular in East Africa for its kick that is located somewhere between the highs of marijuana and cocaine.

He occasionally spits into the human swirl moving along the pavement in front of him. A large 10x15m plastic banner three-storeys above his head shows images of a Brahman Bull, a sheep, and several hunks of red, raw meat. The writing, in Amharic, is advertising one of several Ethiopian eateries that are secreted away in the maze of passageways found in many of the buildings in this part of downtown Johannesburg.

“This is like Addis Ababa,” says Sabir Abdulwhaab, an Ethiopian who works as a waiter at the nearby Elsa Restaurant on Jeppe Street, “Maybe 80% of the people living here are Ethiopian.”

“Here” is the four blocks along Jeppe Street that starts at Mooi Street in the east and ends at Klein Street to the west. It is Johannesburg’s Ethiopian quarter in which restaurants jostle alongside shops selling cheap Chinese-made goods unravelling on the hangers and others importing cloth, coffee and sturdier handmade goods from Ethiopia.

Anything further east of this rectangle is “full of tsotsis. We don’t walk past Mooi Street,” says Seyfa, another Ethiopian, who declined to give his surname. “The tsotsis are always mugging us. They think people who look like us have money, but me, I am just a waiter, boss, I am not a rich man.”

We are sitting on the balcony of Be-Ersufekad, a restaurant on the first floor of the old Medical Arts building on Jeppe Street.

Inside, the place is like any other neighbourhood local in Johannesburg on a Saturday afternoon: men are crammed around tables staring at an English Premier League football match on the television. Some are wearing the colours of Arsenal, the London-based football club popular in African countries partially because their success in the late 1990s and early 2000s – at a time when they fielded several players from Africa or of African descent – coincided with the expansion of satellite television on the continent.

There is a universalism in the Arsenal fans’ experience: they have been long-suffering and wryly defeatist over the past 10 years as their team has self-imploded in the league with a regularity that would make a bran cereal manufacturer proud. But today, this lot are smiling, their team is 4-0 up, and the beer is flowing.

But the beer isn’t your usual SAB fare. Its Ethiopian. St George’s lager. And instead of a South African rugby jersey hanging on the wall, there is a huge flank of cow ageing slowly. The meat is lopped up and served raw to customers with injera and a chilli and mustard sauce in a dish called awaze.

The food certainly isn’t your regular stodgy pub grub, but rather large platters of spongy injera topped with little mounds of spiced minced meat, vegetables, home-made cheese and dollops of shiro (a powdered broad bean or chickpea-based stew). The dishes are aromatic and people are tucking in with their fingers – finger-licking good in a way that doesn’t include deep-fried chicken and MSG overdoses. And it comes in at between R40 and R60 for a platter that easily fills three or four people.

“When we go out to a restaurant to eat, we want to experience many flavours,” Abdulwhaab says, explaining the variety of choices on the injera platters. “To taste just one flavour is boring. At home we don’t eat as many different types of food at one meal, maybe just two or three different flavours.”

I can’t help but snort up some kitfo (ground beef cooked with butter, chilli and Ethiopian spices) at his suggestion that Ethiopians are gastronomically boring at home. Abdulwhaab says while he enjoys South African cuisine (pap and braai meat, sigh) he, and many other Ethiopians need to reconnect with their homeland through the food they eat and its taste sensations.

I tell him that former Durbanites have a similar addiction to the “Durban curry” cooked in a combination of spices that South and North Indian restaurants in South Africa cannot replicate, and culminating in a ferocity that induces a sweat just under the skull – especially when suffering a hangover. At times, one’s tongue feels a particular questioning on its sides, that is only about home. Abdulwhaab nods knowingly. For a moment, we both appear to have a Remembrance of Things Past moment, staring into the middle-distance and salivating over something much spicier than brioche.

I chat a while with Abdulwhaab, Seyfa and Teddy, who grew up together in Merkato, a suburb in Addis renowned for its huge marketplace, and with an exotic glint in the eye, wonder why they left Ethiopia for the grime and crime of Johannesburg. It is the usual story; an unknown future in a South Africa that routinely breaks out in xenophobic violence is still preferable to a life “under a dictatorship where you are not free to think what you want, to say what you want and to do what you want,” says Seyfa.

I live in Johannesburg, in the old central business district. I try not to venture north of Empire Road. After that boundary, the city becomes flat with anodyne suburbs; its streets filled with monochrome people, ideas and paranoias.

This is the only intolerance I allow myself. One that is rationally unjustifiable, yet, sweetly allowed.

For there is an easy cosmopolitanism of the working class – from Pakistan, Bangladesh, the Democratic Republic of Congo, Ethiopia, Somalia, Mozambique, Zimbabwe and Nigeria – on the streets of the city, whether in Fordsburg, or in Yeoville, or in Kensington, that one never feels in Rosebank or Sandton or Parkhurst.

These are people usually fleeing war, persecution, genocide, economic stagnation. And they see Johannesburg, as people have done for generations, as Egoli: that place of riches promised and dreams shattered.

South of Empire Road, one understands the Johannesburg that nourishes its residents as often as it feeds on them.

It is a place where one can travel back to the worlds that others have left behind – with them: at Ming Woo on Commissioner Street, where the proprietors speak almost no English, Saturday mornings are filled with Chinese families chomping on prawn har gow, lotus paste buns, crispy pork pies, flavorous tripe, spicy chicken feet and their duck specialties. At a third of the price of a mediocre Asian restaurant in Rosebank.

Some of the dishes to be enjoyed at the Ming Woo Chinese Restaurant. (Oupa Nkosi, M&G)

In Fordsburg during a weekday lunchtime one can head to Student’s Briyani and sit shoulder to shoulder with Pakistani and Bangladeshi men who work in the nearby barber shops, kitchens and paan shops, who tuck into plates of curry and rice or bread for R20 a plate. They will return to their work sucking the flavour between their teeth, and their beds at night, bemoaning why it is so hard to find love in South Africa.

This is a Johannesburg that will feed life into its people, or with all its caprice, suck it out. It is an intoxicating, dynamic city of immigrants that is changing – as it always will. But my downtown is not what it was – it never is.

The incursions of places like Maboneng is changing Johannesburg in a manner that makes my boundaries smaller. Every day, one feels more like Florent in Emile Zola’s The Belly of Paris, the bourgeois flats emerging right on my doorstep, the widening gap between Zola’s “fat and thin” obvious as one compares prices of coconut juice in Market on Main to those on the streets of Fordsburg. Or simple Ethiopian food.

The tensions between rich and poor in a city always on the edge is evident as one moves a block away from the “Place of Light” – the suggestion is, towards “a dark Africa”, unpoliced by private security guards on street corners. A Johannesburg where people eat, live, and love, yet remains invisible to the middle-class eye.

Ethiopia gets its injera back

What? You can’t cook doro wot?

Just because you build it, it doesn't mean they will come. But Arts on Main in downtown Jo'burg is drawing the crowds every weekend.
Read more
Advertising
Continue to the category
Politics