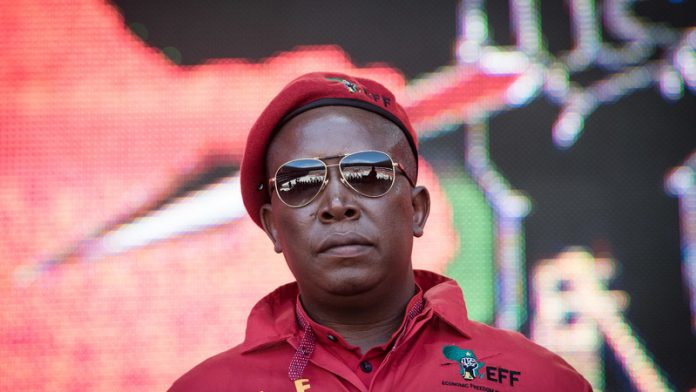 Economic Freedom Fighters Members of Parliament were forcibly removed from the National Assembly today after a violent confrontation saw MPs punching one another during a session.

MPs were debating President Jacob Zuma’s budget vote in the National Assembly on Wednesday when the incident took place.

This is the first time Zuma is speaking Parliament since the landmark Constitutional Court ruling regarding his Nkandla estate.

The EFF MPs objected to Zuma addressing the House in the light of the Concourt ruling, which found he had violated the Constitution by not following the directives of public protector Thuli Madonsela to pay back the money spent on his Nkandla homestead.

Speaker Baleka Mbete ruled EFF MPs out of order and asked them to sit down as they jumped up one after the other demanding Zuma be prevented from taking the podium. “Leave the chamber, Honourable Ndlozi,” Mbete eventually said to EFF MP Mbuyiseni Ndlozi. Ndlozi shouted at Mbete: “Have I broken my oath of office? A person breaks the oath of office, you don’t order him to leave the House.”

Shortly thereafter, EFF MPs were removed from Parliament by protection services following a violent scuffle in the Assembly, according to News24’s live feed at the session.

eNCA reporter Lester Kiewit tweeted video footage of the violent exchange, which included some people throwing punches at one another.

The EFF has subsequently said the party is going to open a criminal case for being physically removed from Parliament, according to News24.

This follows EFF leader Julius Malema’s vow in March this year that he would not allow the president to speak in Parliament again, and that EFF would physically stop Zuma from speaking.

“Zuma must step down because he is no longer the president of this country‚” Malema said in the wake of the Constitutional Court judgment on the public protector’s report on Nkandla.

“If Zuma is continuing to stay in office‚ he leaves us no choice but to use practical ways to remove him‚” Malema said at the time. – Additional reporting by African News Agency (ANA)