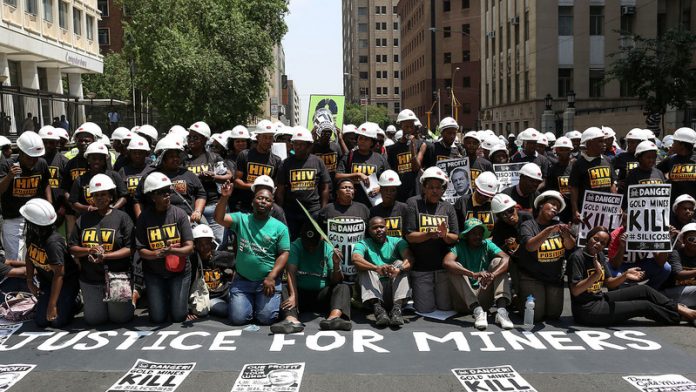 Lawyers acting for the mineworkers who filed the biggest class action in South Africa’s history, resumed their negotiations with the 32 gold mining companies on Tuesday. Last Friday’s ruling has given thousands of sick and elderly miners and their families the chance to hold the mining giants accountable. Their lawyer, Richard Spoor, and Section27 senior researcher John Stephens spoke to the Mail & Guardian.

What is the next step?
Spoor: I’m assuming there won’t be any appeal. If that is so, we will deliver the summons on the mining companies and they will be obliged to set out their defence.

How will each settlement be calculated?
Spoor: Once the liability of the mining company has been established, the individuals will make their claims; their compensation will then be determined by the court. On a case this size, [the process] will invariably result in some kind of agreement about how to calculate the scale of damages according to age, degree of sickness, where you served and how long you served. It will be a complex case and one size won’t fit all.

There’s also a second process, which involves a negotiation between the legal representatives for the miners and the mining companies. This has already been running for more than a year.

If the mining companies were already negotiating, why do you think they fought in court for so long?
Stephens: The mining companies didn’t want this judgment [to become a class action] because they knew that individual mineworkers are too poor, too sick and don’t have access to legal resources to sue individually. They wanted to make sure that people couldn’t sue and that’s why they vigorously fought this class action.

Can any other former mineworkers join the class action?
Stephens: The case goes in two phases. There will be the big hearing on common issues and everyone who fits the class criteria ,as set out by the judgment, is now part of the class. If you don’t want to be part of it, you can opt out.

There will be notices posted in all labour providing areas – from Malawi, Mozambique, Eastern Cape and Lesotho. They will say that if you meet this criterion you are part of this class – but you can opt out.

Have the mining companies said how they would like to resolve this?
Spoor: Besides the ongoing negotiations and the meeting this week, we think the pressure will be felt from shareholders. Now that the class action has been certified, it raises the ante considerably.

Shareholders will say that this doesn’t look promising because the mining houses had claimed that there was no case, but now the court has ruled otherwise.

What is the best case scenario?
Spoor: It’s a complex interaction because if we wanted a quick negotiated settlement, the industry would want a compromise from us. On the other hand, we are dealing with a very large class of people, many of them elderly and sick.

The longer the litigation goes on, the stronger we are legally. But the price would not only be our clients potentially dying, but also the risk that any of these companies could go insolvent or wind up. There is considerable uncertainty and we need to strike the right balance.

How many claimants have died waiting for this judgment?
Spoor: Though we don’t have exact figures, we estimate that 4% of our clients die every year – that’s at least 5 000 people who have died during the past five years [during which] we’ve been fighting this case.

The rate at which they die is significant. We have a client base of about 30 000 individuals; we expect about 1 000 to die every year.

The judgment stated that the dependents of miners who have died as a result of silicosis and/or tuberculosis (TB) can form part of the class action. How will these dependents prove the cause of death?
Spoor: Proving the cause of death is very difficult and we have a couple of ideas about it but you can imagine the situation for people who live in rural areas who might not have a death certificate that says “this person died of silicosis or TB” or its consequences.

We’ve been playing with ideas such as verbal autopsies based on a balance of probabilities, taking statements from people who cared for the worker before they died and their medical history.

With upwards of an estimated 500 000 claimants, what is your view on the mines’ lawyers surmising that such a class action would be unmanageable?
Stephens: What those lawyers failed to recognise is that the alternative is 500 000 cases of the same complexity argued on a case-by-case basis. Now that is far more unmanageable.  Of course, a case of this magnitude is going to require a lot of work but that is what courts and lawyers are for.

We can’t say that it’s too much work and there is no alternative. We need to find the best way to do it.

What will happen in cases where the mine companies have been dissolved or are no longer operating?
Stephens: There is a bunch of corporate arrangements that the companies have tried to argue would insulate them against accountability. But the court dealt with this; the parent company can still be held liable. So if the company is gone, we can’t hold it accountable. But if it’s just a matter of it having been sold and they still operate under whatever name; the idea is for them to still be held accountable for what they did.

How much could this settlement be worth?
Spoor: That’s a very difficult number to put together. It’s not a good idea to guess what it could be – it still needs to be determined.

We can, however, draw a picture of the average living claimant who is in his late 50s or early 60s. He probably worked for 17 years on the mine, was retrenched in his late 40s and has been unemployed for eight to 10 years. He can no longer work, because his health isn’t good, and he is a burden on his family. His disease is progressing very slowly.

The average value of a claim in this instance, based on loss of income, pain and suffering and routine medical costs, would be somewhere between R100 000 and R300 000.

What effect does this ruling have on other cases where mining companies have neglected their workers’ health or failed to put safety measures in place?
Stephens: This case is a game-changer for vulnerable and poor people who have tried to take on power and hold it to account.

The class action mechanism is a powerful tool for the poor to hold those in power to account. It’s underdeveloped in South Africa. It hasn’t been used very much – this case has set a path that others can follow.

Mokgadi Mabela is the bee lady whose love for good honey has blossomed into a business. She tells us about her genius dad and her late introduction to bees