Water-fed gardens in Malawi ward off starvation – for now 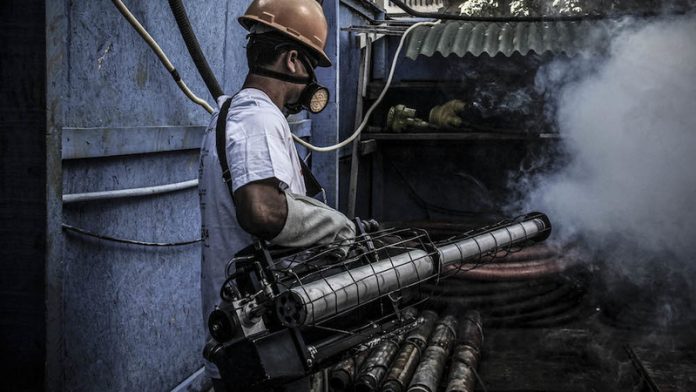 Esnat Witinesi’s house is surrounded by fruit trees. Some bear mangoes, others papaya, bananas, avocado pears. She also has a vegetable garden where maize, leaf vegetables, onions, tomatoes and sweet potatoes flourish. Chickens scratch the ground in the yard and she keeps goats.

It’s hard to believe she is in the middle of the worst drought Malawi has seen in a decade. “It has rained only four times since December,” Witinesi (32) says. Even then it would only be a splattering of drops, hardly enough to bring relief from the heat.

The parched fields and scorched plants around her village of Matowe, in the Chiradzulu district, bear testimony to the devastation wrought by the strongest El Niño since 1982.  In April, Malawian President Peter Mutharika declared a national disaster, warning that the number of people who had already been rendered food insecure (around 2.8-million) would increase and that more aid would be needed.

But 18 households in this village have been able to escape the worst effects of the drought and can feed their families.

The irrigation group
They are members of the Tiwaphunzitse (Chichewa for “let us teach them”) group formed in 2013. Before then they were highly dependent on food aid, but now the members have vegetable gardens. The members of the club use the small Namapale stream that runs through the village to water their crops.

Like most smallholder farmers in Malawi, they previously depended on rainfall and only harvested their crops once a year. It was after Harold Thayo, the agriculture extension officer for the area, taught them about irrigation methods and food diversification that they formed the irrigation group.

Thayo introduced them to a simple, but effective solution: watering cans used throughout the year. Before that they only had buckets and pails, which wasted much of the precious water they carried from the stream. Even then they would only attempt to irrigate once a year, as the rainy season came to an end.

Witinesi and the other members have attended meetings and open days on nutrition and food preparation.

“It is part of my job,” says Thayo. “While many people in Malawi do have food, they don’t know much about food diversification.”

He encourages them to use locally available foods such as ground nuts, pumpkins, soya, papaya and bananas.

“I can confidently say there is no malnutrition in my area and irrigation farming has helped achieve that,” he says.

Use of watering cans to irrigate crops have helped villagers grow their own vegetables. (Josephine Chinele)

Mouths to feed
Witinesi has many mouths to feed: her three children, an elderly grandmother and her husband. “Thank God I will not be desperate for food,” she says. “The children have soya meal porridge for breakfast and tea with sweet potatoes or cassava before they leave for school.”

Tiwaphunzitse’s chairperson, Batson Kenisoni, says that in November last year the group harvested 87 bags of maize from three hectares of land and shared it among its members. Recently, they made a profit of MK360 000 (about $507) from tomato and onion sales. They harvest three times a year since they started irrigating.

“We [previously] struggled to pay for our children’s school fees. We had this small stream but we only used its water for domestic purposes.”

Now they have money to “buy additional food such as fish and meat to ensure we have a balanced diet. Nobody from the group can claim they don’t have the means to have a well-nourished family,” Kenisoni says.

Irrigation farming
There are three other irrigation clubs in Thayo’s district and he says they are flourishing. The Malawian government has said that irrigation farming is the only solution to its food crisis. Last month Agriculture Minister George Chaponda announced in his budget speech that the country would divert almost half its $98-million annual budget from fertilizer subsidies to irrigation.

This will help 285 000 smallholder farmers to buy pumps, engines and treadle pumps. Malawi started focusing on irrigation after the drought of 2002 to 2005. Former president Bingu wa Mutharika kicked off the Green Belt Initiative in 2008, which includes the huge Shire Valley Irrigation Project. The aim was to develop 42 500 hectares of land for irrigation in the southern Chikwakwa and Nsanje districts.

For years the government struggled to get these plans off the ground, but it has now secured help from the World Bank and the African Development Bank and preparatory work has started. But the multimillion-dollar mega-project will take years to complete and the crisis in Malawi is expected to worsen in the next year — even though El Niño will probably come to an end, its effects will be felt when the next harvests should be in.

Read our story about the water crisis in Sudan here.

A solution to the food crisis
Small-scale irrigation schemes such as the Tiwaphunzitse club provide relief to some.  At her home, Witinesi is preparing food for her children who are about to return from school. “The children all have lunch together: nsima (Malawi’s staple meal) with vegetables and eggs, chicken or fish and later dinner. We mostly have fruit after these meals — we have fruit in season throughout the year.”

She knows how precarious their position is. The ministry of agriculture gave Tiwaphunzitse a treadle pump last year, but the low levels of the Namapale stream have prevented them from using it. “We can see the water is getting lower and lower,” she says. “I don’t know if it will last another year.” — Additional reporting by Adri Kotze