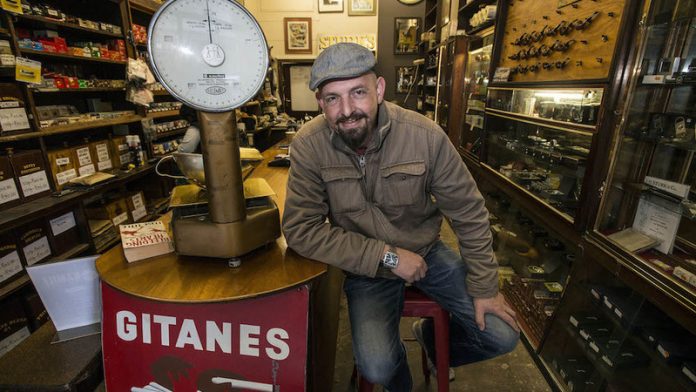 On a corner of Greenmarket Square sits the oldest shop in Cape Town, Sturk’s Tobacconists. Four families have owned it since 1793. Currently at the helm is Alan Phillips, 37, who cracks open a Tafel lager as he speaks.

“The shop hasn’t changed location since then. It just got a bit smaller,” he says. “Back then it was a general dealer. English wasn’t spoken yet. It was all Dutch. They sold ropes and wagon wheels.”

Phillips came to own a tobacconists thanks to his love of pipes. There are around 150 in his personal collection. From behind the counter, he withdraws two dusty leather boxes. Inside, burnished wooden pipes are cushioned by red velvet. They date from midway through the last century, and are valued at R10 000.

Tobacco and its attendant paraphernalia are stacked almost to the roof on Sturk’s shelves. On the counter, an antique scale is still used for weighing the loose tobacco that Phillips and his staff blend by hand.

“It’s kind of like baking. Or making a stew,” he says.

In ledgers underneath the till, the recipes are written for the tobacco blends favoured by regular customers. Some have been coming to Sturk’s since the 1950s.

“Others are dead now,” says Phillips and adds, deadpan: “Maybe from smoking. I don’t know.”  Fewer people smoke these days. Sometimes, people who find out what Phillips does for a living criticise him for selling a harmful product. Phillips shrugs it off. He only sells to consenting adults, he says. If his two young sons were eventually to take up pipe-smoking, he wouldn’t have a problem with it.

In an era when smoking is increasingly socially stigmatised and governmentally regulated, Sturk’s keeps ticking over. “A business doesn’t stay open for 223 years by tarnishing its reputation,” Phillips says.

Batsa fires back in response to Dlamini-Zuma’s appeal