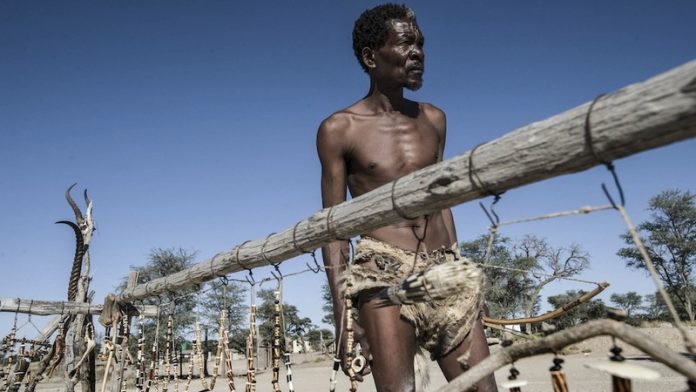 In his article Look at the kwerekwere in the mirror, Tinyiko Maluleke discusses the term “kwerekwere”, a derogatory word referring to African foreigners or migrants whose languages are not understood. A historical echo is found in the term “hottentot”, an onomatopoeic echo of the click-driven, halting-sounding language of the Khoi the Dutch encountered in the Cape in 1652. Not understood, therefore inferior – then as now.

Maluleke argues that the huge variety in skin colour in this country gives rise to many, often erroneous, instances of labelling with the term “kwerekwere”. Indeed, everyone looking into a mirror should see a kwerekwere. I always did.

What Maluleke does not discuss are the basic economic and power relationships underpinning this.

From before colonial times, the Nguni herders who had initially occupied the eastern lowlands drove the San into the Kalahari. The San, perhaps, are uniquely justified in not seeing a kwerekwere when they look into a rare pool of water.

The Dutch term “hottentot” persisted in the Cape, contracted to “hotnot” for a coloured person, possibly actionable these days. Yet some coloured people were able to “pass for white”, which provided enhanced social and economic status – and power. The apartheid system went to absurd lengths to ferret out these cases to ensure “racial purity”.

With the advent of democracy there was the promise of an end to this racial pigeonholing, by means of bottom-up, people-driven development. The return to “trickle-down” macroeconomics and the “two nations” paradigm ensured that between 1996 and 2005 there was already a 123% increase in those, mainly black, living on less than $1 a day. Unemployment grew relentlessly and 2008 saw the first major outbreak of xenophobia.

A general and steady increase in the wellbeing of all groups since 1994 might well have made people increasingly tolerant of each other, plus providing room – and employment – for African migrants, the most powerless of all. Yet the smallest differences between people have now become a source of rivalry, resentment and envy. Some reference to these harsh underlying drivers could have much enriched Maluleke’s analysis. – Balt Verhagen, Johannesburg

I concur with Lynley Donnelly’s article Sweet for fattening firms, not folks, which questions the motive for the government’s plans to introduce a sugar tax, initially on sugar-laced drinks, but who knows where this one will extend to?

The treasury is good at seeking new revenue streams, and more so now that pressure exists to collect taxes in the conventional categories of VAT, PAYE and company tax.

The government disguises new taxes such as a sugar tax as being good for the environment or public health. For example, the vehicle emissions tax and the future carbon tax are poised as good carbon-reducing initiatives, in the same way as sin taxes confront health issues. In reality, however, these taxes do little to change consumer behaviour, and the funds collected are never ring-fenced to fund meaningful initiatives in the taxed areas.

Maladministration, squandering and corruption in the public sector mean that the most progressive move by Finance Minister Pravin Gordhan would be to place a moratorium on all new taxes and tax increases at all levels of government.

The aim would be a drive by the government to find the additional funds it requires for service delivery, by means of meaningful savings initiatives, addressing maladministration, improving efficiencies and fighting corruption. – Wayne Duvenage, chairperson of the Organisation Undoing Tax Abuse (Outa)

The use of terms such as “lowest common denominator” and “international consciousness” (read “pale imperialism”) is clearly indicative of a “bloody agent” who wishes liberty for themselves but not for others.

What makes Liberty think that the best of anything only comes from outside our borders?

This sounds much like the view that any African rebellion against pale culture must, of necessity, be flawed, demonstrating a lack of “maturity”. We remain children in the eyes of pale people, yes? By the way, has Liberty taken the trouble to canvass the opinion of us, the “working population”?

I hold no brief for Hlaudi Motsoeneng or any political party. Yes, one would have implemented local content differently, but surely we cannot find fault with his wishing our airwaves to be ours?

So, Irma Liberty, please be so kind as to “allow” us our cultural liberty. African “cultural knowledge” is held by every single one of us, Motsoeneng included. It seems that, according to you, we must remain continually beholden to pale academia as our “standard”, and not to our cultures in their vibrant multiplicity of shades and forms.

Let us beware of pale reactionary fundamentalism, of cultural imperialism, and let us celebrate, in all it fantastic and flawed forms, the slow, sometimes painful, recapture of our own cultures, musics and associated talents. – Muna Lakhani, Cape Town

Thank you for your editorial, The poisoned nuclear debate. The trouble with nuclear addicts is they appear blinkered to alternatives, preferring to live in the energy era of the past century. They resolutely refuse to acknowledge the huge, rapid and economically viable advances in renewable energy. A brilliant new solar era lies ahead.

We “greenies” know that modern developments are enabling us to get all the energy we need from renewables – the sun, wind, tides, small hydro and other sources.

We in South Africa have among the best of these resources in the world. The nuclear fraternity fails to acknowledge that renewable costs are dropping as coal and nuclear costs escalate.

Renewable energy enables the most rural of households to have electricity (off-grid), which nuclear-generated electricity, with a centralised grid, can never do. When it comes to employment, the figures from Germany are that nuclear employed 30 000 people, but renewables are already employing 400 000.

Why would anyone want to follow the nuclear route? Quite simply, because those involved and in power stand to make massive amounts of money, and that seems to include our president. The taxpayer will be saddled with the huge capital debt and will face ever-increasing electricity costs.

Why? Private equity never invests in nuclear because it is too risky. Governments commit to nuclear.

I am a realist. I am not being hysterical. I know the advantages but also the dangers of nuclear energy. I know, too, that we cannot fool nature, so we need to be honest.

We do not see this from nuclear advocates. They evade the fact that we have still not solved the problem of managing nuclear waste. They don’t include the escalating expense of decommissioning nuclear plants, which Britain and Germany now find are more than the original construction costs.

They don’t consider the serious health and environmental hazards of uranium mining. It is a myth that nuclear energy is an antidote to climate change. The generating process produces less carbon dioxide than coal, but when the mining, transport, construction and decommissioning are factored in, nuclear is neither clean nor green.

Another myth is that only coal and nuclear can provide sufficient baseload power. But energy from renewables can now be stored around the clock. It just needs the political will and to be freed from the greed of those in power.

This planet is the only one we can live on. We are totally dependent on its wellbeing. If we don’t treat the natural world fairly, we will pay the price.

Has the nuclear fraternity not noticed current global weather patterns, from drought in the Western Cape to unprecedented floods in Europe, China, the United States and Australia? Have they not noticed that the planet is hitting back because we are disrupting millions of years of evolutionary processes?

The government approved R200-million to prepare for nuclear procurement and to assure the public about nuclear generation.

We wasted billions of rands on the pebble-bed modular reactor. All this could have been far better spent on skilling, equipping and working for the development of our people. – Bishop Geoff Davies, patron, Southern African Faith Communities’ Environment Institute

■ One trillion rands (and counting) for the nuclear build. That’s a big prize.

So it’s hardly surprising that Kelvin Kemm, a nuclear lobbyist and the recently appointed chairperson of the South African Nuclear Energy Corporation, is going to give the Mail & Guardian a bit of a rev on anything that is vaguely critical of the nuclear industry.

It was Kemm who equated Greenpeace with terrorists and called for their arrest, who believes Fukushima wasn’t a disaster, and who calls anyone opposed to the nuclear pipe dream unpatriotic.

Kemm is simply trying to improve his hand in the high-stakes game. He’s not looking to debate. His tactics are simple and consistent: get noticed, colonise airtime, shout as loudly as possible about biased newspaper reporting and emotional greenies, and eventually the attention shifts to the tantrum and not the substance. Muddy the waters and the sharks are free to roam.

Every citizen or environmental organisation opposed to nuclear has taken great care to argue from facts, informed opinion and international experience.

The National Development Plan calls for a “thorough investigation on the implications of nuclear energy”. It hasn’t happened.

The closest South Africa has come to a debate is by way of the Integrated Resource Plan 2010, now seriously outdated, and the environmental impact assessment (for Nuclear-1), currently with the department of environmental affairs for its approval.

Let all voices be heard. Let us focus on the need for nuclear, on its cost, on its safety, on its sustainability as an industry, on its effect (positive and negative) on the environment and people, on the management of its waste, and on whether renewables are a better option.