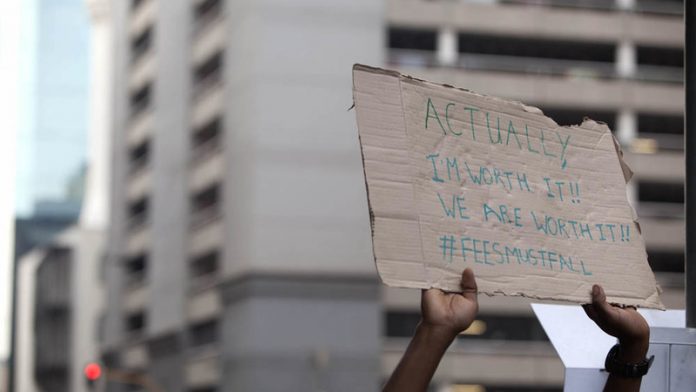 As another #FeesMustFall nationwide shutdown looms next month, deployment to Student Representative Council (SRC) positions in the country’s universities is heating up infighting between members of the Progressive Youth Alliance (PYA).

At least four members of SRC bodies at different universities confirmed that they were warned not to speak on leadership preferences ahead of next year’s ANC elective congress.

This is while national student leaders have appealed for an apolitical stance to the battle for free education.

“They are dealing with us because we pronounce on the inefficiencies of our political leaders and we speak our mind,” said one of the disgruntled student leaders at Walter Sisulu University’s Mthatha campus.

This is where the ANCYL opted to contest for power against Sasco in last year’s student body elections. It is a decision that Sasco secretary general Thembani Makata believes may have been fuelled by a desire for personal benefit.

“It’s internal disagreements emanating from SRC deployments. No matter how hard we try, at the end of the day some won’t be deployed and there will be those that are unhappy. There is interest because of status and some get free residencies and a waiver of fees,” she said.

At the University of Zululand in KwaZulu-Natal, the Young Communist League did the same, but once it contested and won the elections it attributed the victory to the collective PYA. Those students’ actions were condemned by Sasco.

“Comrades who have contested under the banner of the YCL have been condemned… We are not aware of any bad blood between our structures (at the moment),” said YCL national spokesperson Khaya Xaba said.

When asked to respond to claims that the newly elected Sasco leadership is currying favour with an ANC faction loyal to President Jacob Zuma, Makata appeared unaware, but confirmed the perception.

“In the policy conference they were given opportunity to discuss and never raised it… When it comes to leadership preference of the ANC, we won’t take a stand. It might be a perception, but there’s never been a declaration. We don’t involve ourselves. We usually reprimand people who do that,” she said.

Makata also insisted that relations between the PYA structures on all campuses are cordial and, even though the policy conference resolved to improve problematic relations in the alliance, it would not derail this year’s planned Fees Must Fall protests.

At the conference Sasco resolved to resume the national shutdown at the end of August should the government remain silent on how it will introduce free education.

Makata said the shutdown is being considered due to the continued discussions on fee increases by management at tertiary institutions. But she warned that this year’s student protests will be widely supported and will have a bigger impact.

“Management should not be involved in discussions on fee increments until the presidential (task team) report is done. The shutdown will only happen if the government does not respond to our demands. If the shutdown goes ahead, we will involve Cosas and we’ve already spoken to Cosatu about involving (education and cleaning services union) Nehawu,” Makata said.

The student body has written to the presidency asking for an update on its plans but said it has not yet received any response.