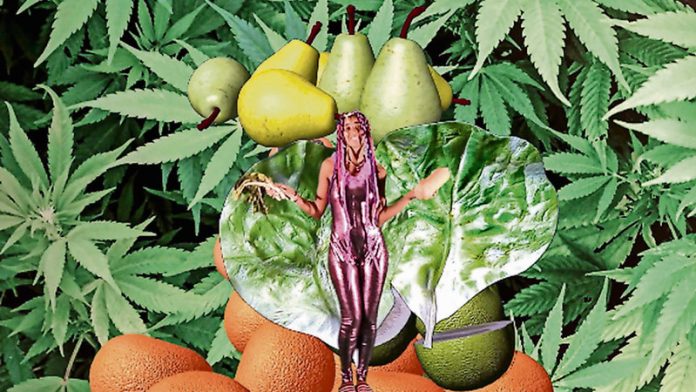 As I was making my way to work one morning last week, I had a vision of fresh vegetables leaving the earth, my hands dusting the black soil from the produce. I was in a fecund ­pasture, the brown of my knees ­feeling at home among the green.

Eating the food and words of ­Tabita Rezaire the night before had aroused my body’s deep desire to eat well so that I could awaken sleeping chakras and pathways into other minds within my mind.

My vision was abruptly interrupted by a text message from a friend who invited me to come and work for a few hours at an organic farm in ­Daveyton the following day.

I’m paraphrasing Elizabeth Gilbert, but in a conversation she had with Krista Tippet on Tippet’s On Being podcast, she says that when life wants you to change direction, it taps you on the shoulder and drops you little clues that, if you are curious enough, you trust and follow.

I didn’t overthink this clue nor did I treat it lightly. I put on my denim dungarees and old takkies the following morning and drove to the farm where, indeed, I found ripe vegetables and, to my surprise, my next big story — a feature for one of the August editions of Friday about a family of women living the exact kind of life I have imagined and reimagined in my distant future.

I am learning that, in a perfect way, life on the left hand will confuse and worry you with problems and, on the right hand, hold the bread of solutions to those dilemmas. It’s a matter of shifting one’s gaze.

I was telling a friend about the recent Grahamstown Festival and she presented me with an example of the wisdom of shifting one’s gaze. For the record, the festival itself was good — there’s definite change sweeping through its curtains, but being in Grahamstown, the untransformed town, was an assault on the senses for someone who has studied its wretched history.

I was telling my friend how hard it was to enjoy the programme held in a building still named after the 1820 settlers, thinking of the souls who had been and continue to be settled on. I was singing the known woke hymns of sorrow when she said: “You know Mili, I had a different experience of Grahamstown.”

She is wiser than me in years and experience, so I listened intently as she explained that she, as a first time visitor to the town, really enjoyed the calibre of human being she found at the petrol stations, at the ticket desks, on the street selling papers, serving food in the restaurants and driving the festival buses.

“As a Xhosa person, my friend, I must say I’ve never come across such a calibre of people, of Xhosa people, in my life,” she said.

Writing these words might be an unfair simplification of what she means, but in essence, I understood it to mean “you will find that which you seek”.

I went to Grahamstown for the first time in 11 years looking for the colonial accoutrements and I found them, not realising that there are people who live and love there despite the bloody street names and irritating monuments.

Strange as it may sound, for most of my childhood I used to see the shape of the African continent in random inanimate objects or living things that had shaped themselves in a particular way. A puddle of water after the rain. A piece of half eaten meat. A broken tile. A stone. A scarring graze. A patch of grass. Spilt milk. A cloud. A mound of house dirt at the end of a broom. And many other forgotten examples. If this had not started happening again in recent weeks, it could be dismissed as the delusions of an ignorant child.

As this child, though, I would wonder if the moments when I encountered these shapes meant anything. Today, I am searching for meanings to attach to something that might be a figment of my desperate desire for meaning in the mundane. A part of me knows that I’m “reaching’’. Another part is nose down, smelling out clues and seeking direction from life’s little tricks.

This edition is dedicated to shifting the gaze in our surroundings and listening to life’s mysterious voices.

Iimbali, a regular column by Friday editor Milisuthando Bongela, is a space for stories and other narrative-based social analysis

All the knowledge we do not know yet

​Learning to trust curiosity over fear

What does blue-ticking mean for building trust?

The bitter pill of being just to a meanie

Some histories to keep our interracial friendship honest