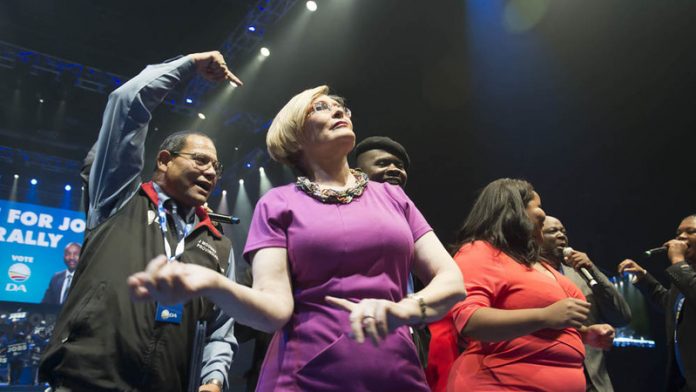 We the South African voters have spoken in the local government election, and we said many different things. Let’s give votes and cities (in part or whole) to the main opposition party, the Democratic Alliance (DA). Let’s give some votes and the municipality where President Jacob Zuma’s homestead of Nkandla is situated to the Inkatha Freedom Party (IFP).

Also, let’s give some votes but no cities to the militant Economic Freedom Fighters (EFF), and small parcels of votes to many, many others.

We as voters have embraced pluralism and competition. It seems to have come as something of a shock to the leaders of the African National Congress (ANC), for some reason. Perhaps the hefty R1 billion the ANC used for campaigning would be better spent on some decent polling.

We also said, as an electorate, let’s take votes – and cities – away from the ANC. Whether the various parties of the opposition attracted our votes, or the ANC leadership repelled us and our votes through their arrogance and brazen corruption, remains a key research question facing academics and politicians.

For local governments in the country’s wealthiest province of Gauteng, in particular, where delivery has been way above the national average, this is a gloomy question. Where did all that hard work go? Was it simply insufficient for a 21st-century “world-class” set of cities?

Why did national credit downgrading matter so much to everyone, but city upgrading by the same agencies of Johannesburg to AA1 status mattered not a jot?

Bluntly, did the rot from the centre suppurate through to voters who may otherwise have rated the metropole of Johannesburg, its mayor Parks Tau and members of the mayoral committee (MMCs) as working well for us? Did we throw out the Tau with the bathwater, in anger and frustration at his ANC overlords?

This question – of blame, simply put – is likely to be at the heart of post-election ANC manoeuvring. Whether the interests of voters will be taken into account is an open question.

Free and fair and (too) fast

To add hubris to the mess, the Independent Electoral Commission (IEC) was brazen enough to host an end-of-election event, declaring the entire endeavour free and fair. This, even while the vote for the economic and provincial capital, Johannesburg, remained incomplete and subject to dispute in multiple wards. Really?

The audacity of the IEC was breathtaking. It would be rather like the Brexit vote being declared while still counting the London votes.

Twitterati breathlessly told us that the IEC emerged from the election well, with its reputation regained after its own tango with corruption and maladministration. Apparently our appetite for a clean institution is so large and urgent that we are willing to allow such incidents to occur, relieved that at least most of the vote had been free and fair, and the IEC seemed to smell of roses.

Then the young women of the EFF stood in mute protest as Zuma spoke at the IEC election centre after the polls in Pretoria. They reminded us of the rape charge and trial of the president a decade ago (he was acquitted), asking profound questions about the moral basis of leadership – and did so just metres away from Zuma, while he bumbled through the usual pleasantries of a captain watching his ship sinking while trying to keep the passengers calm.

Zuma’s security detail – presumably gobsmacked that these young women completely outmanoeuvred their assumed tactical astuteness and training and little plastic ear wires and big guns – were rather less presidential in their handling of the young women.

Strong men shoving around young women – the tableaux acted out exactly what the women were protesting. The women are university students, doing what students do best – cocking a snoop at authority in pursuit of their beliefs. Setting a rather presidential example, it may be noted.

Since then, the social media landscape has been alight with awkward camera angles, muffled sound and snippets of gossip – did female ANC cabinet ministers really round on one of their own for the lapse in security? Was Zuma heard shouting his anger? Who were the women? Why were they screaming when led away? Did the rest of the EFF contingent know of the protest, as they hastily made for the door, apparently refusing to listen to Zuma?

But perhaps the worst thing to happen is that someone told DA former party leader and Western Cape Premier Helen Zille she could stop hiding and start tweeting again. Life is tough enough for whiteys without her assuming to insert snide, often rude and arrogant tweets into whatever debate she feels needs her special attention.

Universities have been literally aflame for almost a year, but this did not stop Zille from tweeting to a #feesmustfall group that:

If this woke bunch hate being UCT students so much, pls help them out of their misery and withdraw their funding. pic.twitter.com/MnfdFVWB11

Political writer Richard Poplak has already eviscerated the tweet and the twit who wrote it. Just what we need – stupid, snide, entirely lacking in compassion, suggesting a flatlined learning curve. And unassailably white on the scale of snottiness and lack of empathy.

Not that anyone asked, but if they did I’d say to fellow white voters, “Stay Calm – but (not just you Helen Zille) please shut up!” The massive change we have witnessed; the “new narrative” that has welcomed pluralism and jettisoned the much-peddled factoid of 2014’s national election, that we were all heading to doom, death and decay – or, worse, Zimbabwean basket-case status; these things have not been done by white people, though we may have been part of the change.

Elections are not a racial census

We do not bear “the white man’s [sic] burden” of being the gatekeeper of liberal democracy, even though various commentators over the last 22 years have told us that black people vote blindly for ANC governments – that elections are a racial census.

These supposed political scientists argued for years that the black vote – that key item lying at the heart of the struggle for democracy – was actually the biggest threat to democracy, because the “natives” kept electing ANC governments. If anyone wanted a better example of why the academy needs a dramatic post-colonial overhaul, read 22 years of election analysis, and weep quietly.

But now these have been debunked by us voters. The academics trotting out these tropes have been shown to write utter tosh; and one can only hope that we all accept – and all will accept us – as part of a massive social revolution that began in 1990 and is still taking shape, unravelling from the violence and racism and psychological scarring of the past and moving restlessly into an unknown future.

It cannot do so where whites or blacks silence one another – but it also cannot thrive where black or white claim credit for the victories of democracy.

We – all of us, in our resplendent variety as voters – we did this. Whites did it. Blacks did it. Coloureds did it. Indians did it. Gay and straight, LGBTIAQ+ and staunchly religious conservatives and atheists, surfers and tiddly-winks players, we all did it.

So let’s own it as a collective victory against those who sit in power and disregard us as voting fodder. The only winner in the local elections of 2016 is the only winner that matters – you and I, the South African voter.

Professor David Everatt, Head of School of the School of Governance, University of the Witwatersrand, has over 20 years of experience in applied socio-economic and development research, political and governance reform, designing and implementing monitoring systems, and programme evaluation.

This article was originally published on The Conversation Africa. Read the original article.