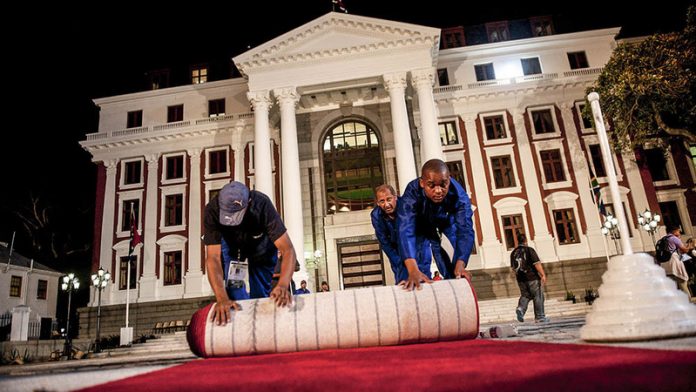 “Cape Town has awakened too late to prevent the likely move of Parliament to Pretoria over the next few years, top government sources have revealed,” trumpeted the Weekend Argus – in December 1994. Twenty-two years later, Cape Town continues to slumber on with Parliament at the heart of the city.

Mention the prospect of Parliament moving to Pretoria to Capetonians today and you’ll be met with a few “it won’t ever happen” eye-rolls.

During President Jacob Zuma’s  State of the Nation address in February, however, he issued a statement on the matter that caused even normally blasé ears to prick up.

“A big expenditure item that we would like to persuade Parliament to consider is the maintenance of two capitals: Pretoria as the administrative one and Cape Town as the legislative capital,” Zuma said. “We believe that the matter requires the attention of Parliament soon.”

Initially, nobody seemed sure how seriously to take this little nugget. Then there was the fact that not everyone interpreted Zuma’s words to mean Parliament should move from Cape Town. Western Cape Premier Helen Zille, in her State of the Province address, suggested it was Pretoria that could do the moving. “If the president’s motive is genuinely to save money, it should be the other way round,” Zille. The administrative capital should move to Cape Town.”

Late last month it was confirmed that the plan being mooted is Parliament to Pretoria, when Parliament announced it has opened tender applications for a study calculating the feasibility of relocating to the Jacaranda City. Such a study, said Parliament’s supply chain management, would need to examine the economic implications of such a move, together with the social consequences.

Parliament employs about 1 400 people in Cape Town. One number being bandied around is the move to Pretoria would cost about R7-billion. Cape Town Mayor Patricia de Lille calls the costs of relocation “astronomical”.

“We have a parliamentary precinct and parliamentary villages, which have been paid for, and to move will mean duplicating these costs as a new Parliament,” De Lille said.

“We believe that the costs of moving Parliament will offset any potential economic gains – apart from which, public representatives from around the country will still have to travel to Gauteng.”

Projected savings deriving from the move have been estimated at between R500-million and R750-million a year, but there is little agreement about when this benefit would kick in.

Tim Harris, the head of the Western Cape’s investment and trade promotion arm Wesgro, says he is deeply sceptical of such figures.

“I’m very pleased a feasibility study will happen, because I don’t think any right-minded assessor of the situation can make the economics work,” Harris says. “To replicate functional infrastructure in Gauteng would cost way more than government has to spend on it [in Cape Town]. I think that’s the only likely outcome.”

He says that advocates of the move to Pretoria are labouring under the misapprehension that government officials are constantly shifting back and forth between the two capitals. “Nowadays the better departments bring only a handful of officials to Cape Town,” he says. Projected savings on travel costs, Harris maintains, are exaggerated.

Nine-year build
Parliament’s position dates back to 1884, when it was used to house the Parliament of the Cape of Good Hope. Anyone who thinks that contemporary infrastructure projects in South Africa are characterised by unique incompetence should consider the history of Parliament’s construction. Scope creep (when more requirements are added to the original plan) was rife. The architect’s original plans were flawed. They also included features that make Nkandla look humble: parapets, fountains, domes. The company responsible for building it went bankrupt. It took almost nine years for the project to be completed.

The question of where Parliament would sit when the Union of South Africa was formed in 1910 was a fraught one. It resulted, by way of a compromise, in the three capitals South Africa now has, to the bemusement of many. (“Why does South Africa have three capitals?” asks one desperate American youngster on Yahoo Answers. “This is an extra credit question at my school. I need the answer by Friday.”) The third is Bloemfontein, – the judicial capital.

Harris believes the motivation for separating judicial, administrative and legislative capitals continues to find application in 2016.

“It’s a big country, and it’s politically pluralistic, and it makes sense to bind the country together by apportioning responsibilities to different cities.”

Economic fears
Many of the fears about Parliament leaving Cape Town are economic: that the city would feel the pinch of losing the revenue attendant on Parliament’s function, in terms of housing, feeding and transporting the country’s parliamentarians and government officials. Before belt-tightening measures were introduced, Parliament was spending about R18-million a year on food and beverages.

That’s just within the institution’s walls: establishments around Parliament are also benefit from the trade. When the State of the Nation address rolls round each year, businesses on Plein Street report almost double revenue. An Adult World opposite the parliamentary precinct – opened in 2014 despite the objections of some MPs – apparently does roaring business.

But not all the economic effects of Parliament abandoning its premises would be negative.

“From my perspective [at Wesgro], there’s some incredible land there that we could get some value out of from the private sector,” says Harris. “We could do quite well out of redevelopment, but there would be a loss to the country.”

One sector that’s guaranteed to be hit hard by a parliamentary move would be Cape Town media. Newsrooms in the city would doubtless face cuts as parliamentary reporting shifted to Pretoria.

Symbolic absence
The absence of parliamentary activity in the city might be felt on a more symbolic level, too. “I think it would hurt the Cape because it would be suddenly on the periphery of the political system instead of in its heart,” Harris muses.

One editor at Independent Newspapers, Gasant Abarder, agrees, saying not only were businesses concerned about losing Parliament but “we will feel a bit removed from the rest of the country.”

Another sense in which Parliament brings political activity to Cape Town is in its status as the epicentre of protest and activism in the city. Practically every major march in Cape Town traverses the same route, from Keizersgracht in District Six to the parliamentary precinct, where protestors hope to grab the eyes and ears of national decision-makers.

“I do think we would miss that texture of the city, where people can physically express their opposition,” Abarder says. “I drive past Parliament every day, and there’s always some group with signs outside it: pro-Palestianian groups, pro-Israel groups … It’s become a central place for people to express protests.”

Bite at the cherry
But Cape Town’s activists don’t seem convinced that the presence of Parliament is essential to their work. “I don’t think it would be that much of a problem for us,” said the Social Justice Coalition’s Axolile Notywala. “We would continue doing the work we are doing. We would find other institutions to engage.”

He points out that many of the coalition’s campaigns revolve around local government, rather than the national level, making the provincial legislature a better target for protest than Parliament.

Notywala also notes that Parliament’s move would give Gauteng-based nongovernmental organisations a bite at the cherry.

Since the transition to democracy, it has been suggested that the ANC’s desire to transfer Parliament to Pretoria is motivated by resentment that the country’s legislative functions should take place in a Democratic Alliance-run city.

Former DA politician Douglas Gibson  stated as much in an op-ed for The Star in May this year. “An unspoken reason for considering moving is that Cape Town and the Western Cape are governed by the DA and not by the ANC, some of whose members think it is an affront that the seat of Parliament is in an opposition stronghold,” he wrote.

Staunch advocate
Unsurprisingly, one of the staunchest advocates of the move has been the Tshwane municipality. Outgoing Tshwane mayor Kgosientso Ramokgopa used his State of the Capital Address in April to deliver a rousing argument in favour of Parliament’s relocation.

“Nothing serves as a permanent reminder of our colonial and apartheid past than the extant reality of two capital cities,” Ramokgopa said. “Surely, if the Constitution is to remain the supreme law of the land, it should follow that the case for the relocation of the legislative seat of the state to Tshwane is a compelling one.”

It’s been almost four months since Ramokgopa made that speech and, since then, the DA took 43% of the vote to the ANC’s 41% and the Economic Freedom Fighters’ 12% in the August 3 local government elections.

Will incoming DA mayor Solly Msimanga demonstrate the same desire to move Parliament from Cape Town? Msimanga was too busy forming coalitions this week to share his thoughts on that. For now, Cape Town sleeps on.

Senior South African politicians have not been spared the coronavirus. What happens if the head of state is not well enough to be at his desk?
Read more
Politics

Behind Ramaphosa’s rejection of the Copyright Bill

The poorly conceptualised and materially flawed proposed legislation was patched up instead of being rewritten. It will now go to Parliament, which should reject the Bill as unfixable
Read more
Opinion