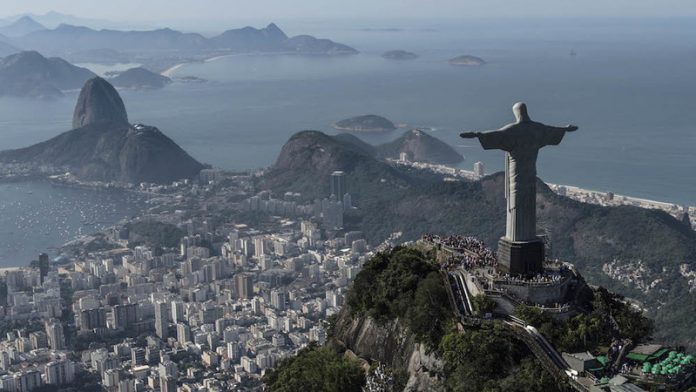 From here, the highest tier in the Santa Marta favela in Rio, I can see the settlement sprawled out – a jagged, tumbling clash of colours scrabbling up the steep hill. I’m in Brazil at the start of the 2014 Fifa World Cup, curious about the attitude of Cariocas – Rio’s locals – towards the tournament, towards life.

Straight ahead lies a view of the distant ocean and, atop the Corcovado Mountain, Christ the Redeemer stands with arms outstretched. I agree with Salete Martins, my guide and a life-long resident of Santa Marta, that the view from up here is worth the climb. Krauss Mansor, an expert Rio guide, accompanies me on Martins’s tour, playing the role of translator.

“Some people don’t want to leave the favela, because of this,” she says, her arms sweeping over the expanse of Rio, gleaming in the midday sun. I admire her positive attitude as we step over numerous piles of dog excrement along the path.

But many of Brazil’s residents, a quarter of whom live in favelas, have faced eviction and, later, during the 2016 Olympic Games, it would become one of several reasons for disgruntled protests against the government of interim President Michel Temer. It would be judoka Rafaela Silva, Brazil’s first gold medal winner at the Olympics, who would draw the focus back to life and the challenges of living in these conditions, her family walking a tightrope of poverty in the City of God favela on Rio’s urban periphery.

In Santa Marta, the matchbox apartments and shacks on stilts with corrugated iron roofs are connected to the main road five stations below by narrow, haphazard concrete stairs. You can journey to the bottom by hopping on the single, overworked funicular installed in 2008. Your other option is to take the 788 steps past houses and communal areas and the everyday goings-on of Cariocas.

Houses are painted in several eye-catching hues. Martins tells me that a local paint company donated the paint for each house (two colours a home), on condition that one member of the family attend a painting DIY lesson to ensure the continued maintenance. It’s this sort of initiative from the private sector that has helped move people away from stagnation.

Someone shows me a flyer for a workshop to be held by Benedito, a popular clown (the red nose and big shoes kind) who lives in Santa Marta. He has a particular interest in recycling and medicinal plants. In his compact community garden, plants grow in old PC units, broken hi-fi stereos and abandoned toys. The children flock to his talks; when someone has a stomachache or a hangover, they pick the appropriate herb to make tea. This tidy, innovative urban garden, with a wooden box tacked to a pole for donations, remains one of the most beautiful things I see in Rio.

“No one will destroy or steal here,” says Martins when I ask. “The community looks out for each other.”

Santa Marta was the first favela in Rio to be “pacified” – taken over by the police in a military-style operation in November 2008. A Police Pacification Unit (PPU) planted roots here and, for the first time, the malevolent drug lords who controlled the residents were forced to retreat down the slopes and out of the area. It was a long, arduous fight with far too many lives lost in the fallout. Martins recall this time with vivid clarity.

At the top of the slope, close to the gated football field where tourists sometimes kick a ball with the children as part of an effort to drive interest and funds inward, stands a wall pockmarked with bullet holes.

“It’s here as a reminder,” says Martins. “A big shoot-out took place between the police and the drug lords. Before, we couldn’t walk in this neighbourhood, especially at night. [We were] always running and hiding.” The relief on Martins’s face is palpable.

With the assistance of a community-funded course in tourism, she left the tuck shop trailer she ran for 21 years and plunged into a new world of opportunities. French clients she had guided enjoyed her tour and decided to sponsor her course in French. When I check in, Martins is giving tours during the Olympic Games too, though the bookings have been dismal owing to many consulates advising against favela visits, she tells an NPR reporter.

I glance at the highest row of shanty houses across from the football field. APARTHEID is handwritten on a tatty board in bold letters. “They [the city] are developing up here. It’s not safe for these people, but they are upset. They don’t want to move. They think the government is discriminating [against] them,” says Martins.

Prior to 2008, and for the decades that people have occupied Santa Marta and other favelas around the country, there was no assistance or involvement from the government. No electricity supplied, no sanitation services, no schools or clinics.

The rickety cement stairs that wind down the hill were built, brick by brick, by the inhabitants who have always believed that the favela was a temporary abode. For the roughly 8 000 people living here, including Martins, Santa Marta is the best they will probably enjoy of the 2016 Olympic Games.

From a souvenir shop called Marlana’s, Michael Jackson’s They Don’t Care About Us plays on repeat. Jackson recorded the video in this very favela, years before pacification. A bronze statute in his honour glows on the balcony where he performed, and I’m told many locals were extras on the set, dancing with him.

It is not difficult to understand why, despite the sunny disposition of Martins and the people she takes me to meet, Brazilians are furious about the money the government misspent hosting the 2014 World Cup. Similar woes, it would transpire, lace the body of their objection to the Games: a corrupt government, squandering of funds, a disregard for the welfare of the poorest and environmental destruction.

Mansor elaborates on the now well-documented Fifa World Cup protests: “No one loves football more than the Brazilians. People are fed up because our politicians are dirty and corrupt. We spent more money on this [past] World Cup than South Africa and Germany together.

“What do you say to them?” he points to three men carrying a woman on a chair up the steps, wisps of damp grey hair framing her face. The funicular isn’t working today at Santa Marta and there are 788 steps to climb.

We leave Santa Marta with Mansor to dine 5km away, in gentrifying Santa Teresa, Rio’s bohemian corner. It’s packed with hippies and hipsters, and winding roads so steep many taxis refuse to enter.

After my first taste of thick frozen açai sprinkled with muesli, just as the locals eat it, we drive downtown and stroll past the Opera House. On the square across from it, young communists gather, beating drums and chanting slogans. Soon, the surrounding streets clog up and the noise is deafening. There is a sense that trouble is approaching. Mansor looks agitated. He indicates that we should depart.

We catch the last cable car up Sugarloaf Mountain and, below us, all of Rio glitters with promise in the dark. In the distance, we can see the tiny illuminated figure of Christ the Redeemer, as we did at the Santa Marta favela, omnipresent, his arms embracing the city.

Sure enough, Mansor’s fears are realised, as the square we left earlier is ablaze with flames and smoke. Lifted above the city and its noise, strife and hopes, we look on in silence. And all the while, that Michael Jackson track plays on repeat in my head. They don’t care about us.

Where to sleep, eat and go in Rio

The beaches – Leblon is less crowded

Injury saw the Olympic champion dubbed an underdog going into the race he won in record-breaking fashion in Rio. But it’s a position he knows well, and now he has an extra year to heal and train
Read more
Politics

Despite a plea from the UN, the country’s court ruled that Lula da Silva can’t run in the presidential elections
Read more
Friday