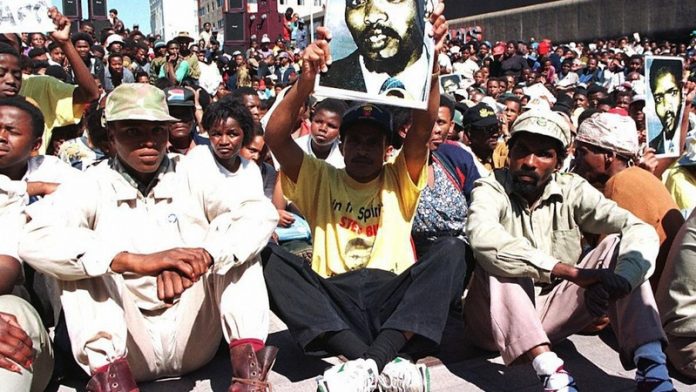 Unite or divide for a new SA?

Reading the Mail & Guardian last week was even more of a downer than usual. Page after page brought more distressing coverage of abuse of power, dishonesty and corruption … until Richard Pithouse’s piece entitled The president versus the people”.

After describing the parlous state of “the Zuma project”, Pithouse points out that the citizens and groups opposing Zuma and his faction are diverse in every other way and are not otherwise politically aligned. They are united on this issue because of the serious nature of the problem we are all confronting as South Africans. Nothing new here.

But what he proposes next is very new: he puts forward the need for bipartisan (my word), united social action to turn the country around.

Pithouse writes that “politics is not a project well served by one-horse riders, dogmatists and fundamentalists”. What a breath of fresh air. This means that even someone like me, who is white (wrong race) and over 60 (wrong age) could play a role in bringing my beloved country back from the brink of total ruin – that we, all of us who can see the problems and who care, can get involved as citizens to fix our administration and economy to make it functional, just and there to serve all of us.

The thrust of his argument appears to be echoed in the article by Tutu Faleni (What would Biko say to us today about black struggles?). Faleni recalls the ideological divide that existed at the University of the Witwatersrand and in the townships in his student days in the 1980s, between those who subscribed to nonracial social action against apartheid and those who excluded non-blacks from the struggle.

Fast forward to the present, and we find again fierce contestation taking place on issues of black identity, which are polarising society along racial lines. “But,” writes Faleni, “the political realities of the black experience in post-apartheid South Africa require a universal response that does not prescribe race as a determinant for participation in the struggle for equality.” He backs this up by quoting Angela Davis advocating an inclusive approach at the recent 37th Steve Biko Memorial Lecture.

Yes, please! Let us find each other, and draw on our strength in numbers, to find ways to take forward our new South Africa, building a place of justice and equality for all. – Fiona Higginson, Durban

■ Tutu Faleni’s views on black struggles and the relevance of Bantu Steve Biko’s ideas in today’s political framework leave a sour taste when one looks at black lives in the country.

Blacks are in bondage and they need to change their state of mind. That’s what Biko espoused. He taught us that the most potent weapon in the hands of the oppressor is the mind of the oppressed.

We need to rediscover our inner selves and sense of purpose before we even think of a universal response to the realities of today. It all starts in the mind. Before we can engage whites in their comfort zone, ours is the task of internalising self-love and conscious blackness, otherwise we will assimilate to whiteness and remain in bondage. Biko’s view that “black is beautiful” paved the way for blackness to find self-love. He fostered pride in black people.

Faleni’s idea of black and white working together is a pipe dream. Many efforts by blacks to get whites and blacks to work together have come to naught. Nelson Mandela tried the concept of a “rainbow nation”, but whites did not buy into it. They saw it as blacks inviting themselves to whiteness – and any person who passes the test has obviously conformed to the white standard.

White privilege can still be found in sports such as rugby, as well as in restaurants and hotels and in the positions of influence in the workplace that white people have. There is ample proof of whites resisting the transformation of institutions of learning.

Perhaps before we internalise Biko’s idea, we need to understand his philosophy of black consciousness. It was never meant for the educated and the middle class only. His idea was an idea for everyone, including the hoi polloi. It is disgusting that his friends are seeing this as a tool for political stardom and grandstanding. How can a man die for an idea, only for it to be relevant, to a select few, and only during the month of September?

I was impressed, however, by the resistance of the pupils of Pretoria Girls High School. It showed that there is a future decided by them, not by their teachers. They must make sure that their response to provocation is not determined by the haters. Their fight against injustice should be our state of mind.

For Biko’s philosophy to be relevant, we need to take his teachings to the remotest villages, shebeens, sports centres and schools. – Muntonezwi Khanyile, Johannesburg

I join many others abroad in mourning the death of Allister Sparks. Another mighty oak in South Africa’s forest of great journalists and sages has fallen.

For many foreign diplomats in South Africa during the apartheid era, such as me, Sparks’ Rand Daily Mail helped us understand not only the currents, but also the tide of events in the country.

That continued with his insightful books about South Africa after my wife and I had left the country and continued our fascination with it.