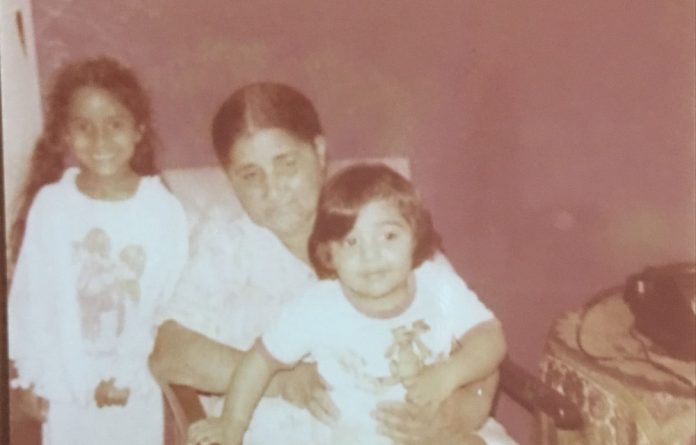 I remember a pink jersey knitted for me by my mother’s mother. A tiny jersey to fit my small primary school frame. Wrong initials in white but no matter – it was made with tender, loving hands.

My grandmother was a domestic worker in Hilary in Durban, at the beck and call of a man we only knew as Mr de Wet. We crept in because he was temperamental and would frown on our visits. Our normally loud voices muted so we wouldn’t get her into trouble.

But visit we did, taking several buses across town just so my mother could see and check up on her. And if it got too dark to take all those buses back, we would stay over and leave early the next morning, surreptitiously vanishing like the mist of our breath.

Those visits to her tiny servant’s quarters with its single bed were stifling. It was dark, the light of a candle an unjust substitution for a light bulb. But those moments were golden because it meant that we could spend more time with this life force who was such an enigma to us children.

Sisi, as she was known to everyone, was someone I never really got to know. She befriended a bottle before she befriended us. And this, in part, was why my mother wanted to visit as often as she could. Checking up on her mother. Making sure everything was okay.

Sisi had ample arms and an ample frame, pitch-black hair and milky-white skin. I remember only a Mona Lisa-like smile bequeathed to us on rare occasions, because under her face was sadness. Heavy and lingering.

As she fired up the primus to heat up some or other curry she told my mother things. Things we had to pretend not to hear because they had nothing to do with children. She could cook, she concocted sheer magic from her pot and we were later squashed into bed, tummies bulging with delight.

There was just us leaving in the morning, tired but happy that we’d been there. Sisi waving goodbye, leaning on the doorframe of her room.

Cheekily my grandmother took a lover, one Uncle Johnny, who wore dapper caps and brought us chips, expertly navigating the slipstream left by my grandfather’s absence. Why they didn’t just get married is a mystery.

She died when I was 12. Found on a bed in a back room of my aunt’s house. Young. She reminded me in later years of tragic beauties such as Marilyn Monroe, who could have had everything but had very little. Joy was their elusive unicorn.

Of course, my recollection might be my mind playing tricks on me because we remember in opaque, embellished hues the realities of our past. But this is the distillation of what remains.

So many women of her generation who didn’t have life abundantly, who made do instead of making the most of. Women whose stories are not written, but frozen in overdose, suicide, heartbreak, disappointment and failure.

I won’t be like that generation. Or even my own mother’s generation, who constantly put themselves last and family first. The original martyrs.

For women who are holding it together on this day, as on any other, I invite you to think about a life where your joy is a priority. Where your satisfaction is for once put at the top of a list.

Ah, to hell with a list, just start to take care of yourself first. I just wanted to share a photograph from an album long packed away. But it moves me to say in weary tones how important it is that, before daughter, sister, mother, aunt, grandmother, we are just us.

Just a woman who started out as a girl, but who ended up carrying the world. Stop for a minute and just take care of yourself. Think about your thinning hair, your swelling frame, your crowded thoughts. Sweep the hair from your face and take up a mirror. Look at yourself honestly and promise you will do better at taking better care of yourself.

Martyrdom is not all it’s cracked up to be.

Iman Rappetti
Iman Rappetti is an award-winning journalist, broadcaster and the author of Becoming Iman and Sermons of Soul. She is the owner of RappettiCom, a communications agency based in Johannesburg.
Facebook
Twitter
WhatsApp
Linkedin